Hagel, Kerry, Brennan: Is the Senate even trying?

Confirmation hearings are supposed to extract policy commitments, but too many senators simply pose for Fox News 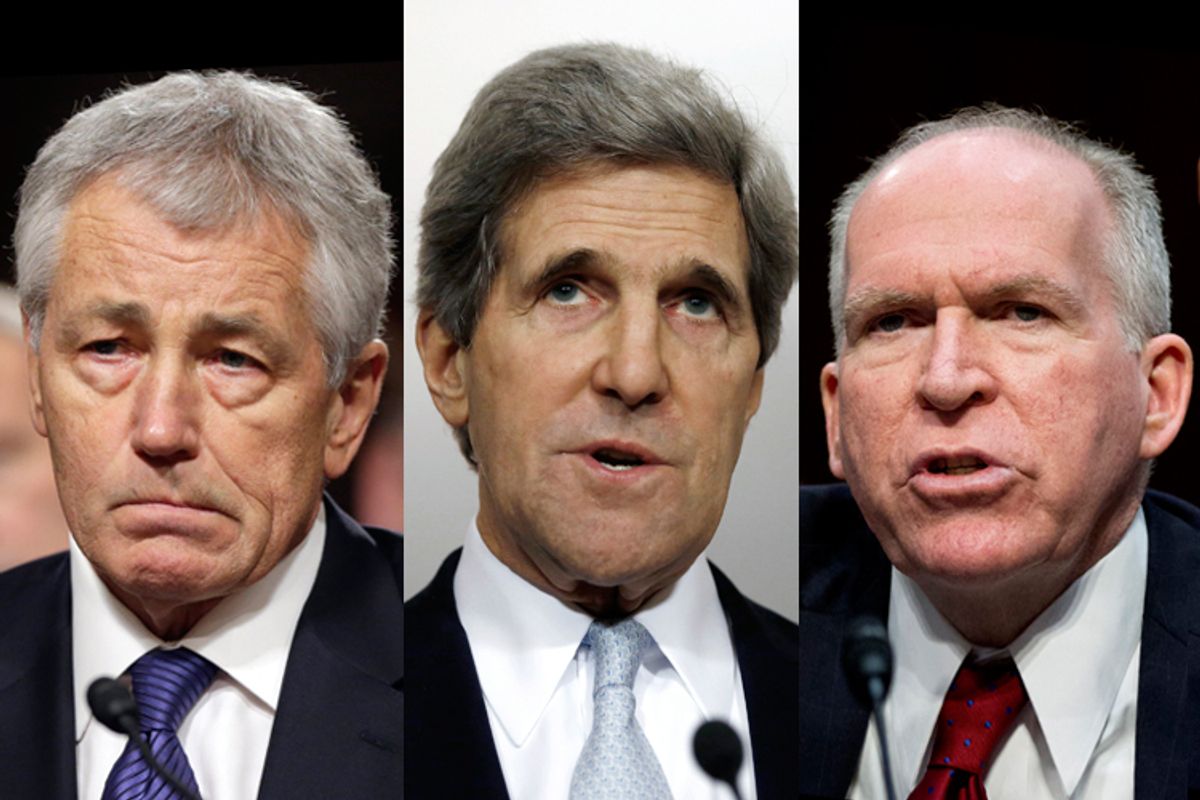 In the last month, we’ve been experiencing the good, the bad and the ugly of cabinet confirmations.

Begin with the good. Both Republicans, and to a larger extent Democrats, used this week’s hearing for CIA director nominee John Brennan for exactly what the process should be used for: oversight. The Intelligence Committee first used the hearing to successfully push the Obama administration to release at least one document that they had wanted, and then it asked for even more – and extracted commitments of future cooperation from the nominee. They also pressed Brennan on a number of both his and, more importantly, the administration’s policies and views on several issues, including drones and torture.

We might debate how well the Intelligence Committee did their job, but at the very least they were trying.

The bad: That wasn’t really the case with the hearings for secretary of state. This process began, remember, with a campaign to defeat possible nominee Susan Rice. Not, to be sure, because she was thought to be unfit for the job but as part of a Republican campaign to punish someone for a phony nonscandal over the attacks at Benghazi. I would note that it’s possible that part of the reason Rice wasn’t eventually selected might have been because Democratic senators were, in fact, unenthusiastic about her for reasons having nothing to do with those GOP attacks. If so, that’s part of the proper give and take between the president and the Senate (which doesn’t mean that the Senate is necessarily correct if that was their opinion; it just means that the president quite properly sought the prior “advice” of the Senate rather than just demanding their “consent”).

Then, once John Kerry was nominated for the job, the hearing basically turned into a lovefest, with his soon-to-be former colleagues failing to press him on very much of anything.

Bad as that was, it was nothing compared to what Republicans have done during the confirmation process for Chuck Hagel for secretary of defense. The problem wasn’t that they pressed him hard; it was what they pressed him hard about. It was almost all gotcha stuff trying to “prove” that his currently stated positions were not what he would actually do if confirmed. Or perhaps that’s too generous; more likely, it was just gotcha for its own sake, a good way to get some attention from Fox News for various senators and an opportunity to make Hagel look bad (which, as it turned out, he promptly embraced, giving what just about everyone believed to be a terrible performance).

Given Republican hostility to the nominee, and especially to a strawman version of the nominee, Democrats mostly responded by being supportive.

Which meant that in a hearing for secretary of defense, there was virtually no attempt to assert the Senate’s influence over the department of defense. And on top of that, the attempts to smear Hagel – reaching it peak, or perhaps the opposite, when new Texas Sen. Ted Cruz dragged out videos carefully edited to produce out-of-context quotations — were a total embarrassment to the Senate.

Why does all of this matter? After all, Rice notwithstanding, three of these nominees are going to wind up confirmed. Is there more to it?

There should be. To take a step back: In the actual American system, as opposed to the version that’s unfortunately often taught in high school civics, both the president and Congress compete for influence over executive branch departments and agencies. The confirmation process is one of the best tools for the Senate — for the majority, the minority, the Senate as a whole and individual senators. Senators can do that by extracting specific policy commitments, by trading their approval in exchange for concessions from the president or perhaps by at least trotting out policy differences with the administration — real policy differences, that is. The goal is to actually affect policy, because it really is possible for senators to do so.

But only if they try. And in the Hagel and Kerry confirmations, there appeared to be very little of that.