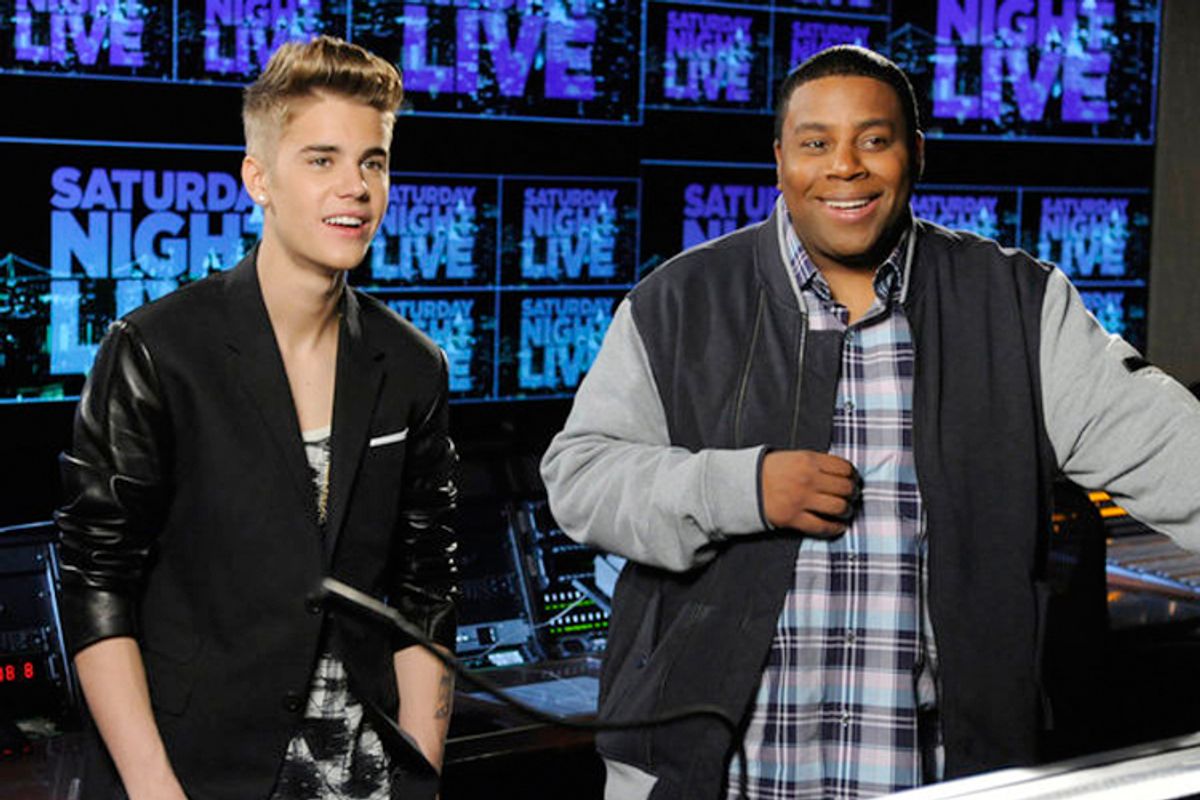 It's always a risk having a musical guest take on hosting duties — not everyone has the gift for sketch comedy — but so far, "SNL" has been lucky, with Justin Timberlake over the years, Bruno Mars earlier this season, and  now the 18-year-old teen heartthrob. Does the Bieb have Timberlake comic chops? Not quite. But the kid was game for anything, and after reportedly being waylaid by food poisoning during rehearsals this week, he demonstrated himself to be a real trouper, letting the cast and writers make fun of his homeboy posturing, naïveté, lack of textbook smarts, recent weed "scandal (for which he apologized, in a Miley Cyrus sketch), his barely pubescent presence (does he shave yet? That face is smooove) and the throngs of girls (and women) who worship him because or in spite of it.  I finally sort of see the appeal — not of his music (oh God, it's bad), but of him. He's the Leif Garrett of the 21st century, an aspiring badass pinup — albeit one with a sweet face and killer eyebrows.

1. Monologue: The Bieb, with wingman Kenan Thompson, serenades starstruck fans in the audience, presenting each girl with a rose and a black history fact — February is Black History Month and Thursday is Valentine's Day, after all. Except that, well, Bieber loses his grasp of history pretty quickly — Denzel Washington did not invent the peanut, darlin'. (But you were right about Phyllis Wheatley!) Don't worry, he'll get schooled — Whoopi Goldberg is his valentine.

2. Bravo spin-offs: Truly the best part of the episode, a commercial featuring spin-offs, and spin-offs of spin-offs, of reality shows, starring people tenuously connected to Bravo's reality "stars," one show shorter than the next (five minutes, one minute), with names like "The Moroccans of Mulholland Drive," "A Coppola Coconuts," and "The Real Houseplants of Beverly Hills."

3. 50s Romance: JB plays the Danny Zuko ("Billy" here), boasting about his exploits with Cecily Strong's Sandra Dee-esque "Angie," in this sendup of "Grease." Only problem is, the two lovebirds are speaking two different languages of love: Angie at 16, is a cougar to this tween Billy, who isn't really sure how this sex and dating thing works.

4. Valentine's Day Message from Justin Bieber: It's a highlight only in that it is the weirdest sketch of the night. Bieber's attempts at a romantic, Valentine's Day seduction get foiled by a strange creature named Taco, who is in his care. Oh, and the Bieb snaps a cell phone pic of his junk, and sends it to the former Secretary of State. The woman's just recovered from a blood clot, what are you trying to do to her, man?

5. Principal Frye: Valentine's Day: "SNL" is relying too heavily on its standard, and weakest sketches — "The Californians" (please make it stop); "Weekend Update's" feature, the childhood friends of, this time, Richard III (which was funny the first two times — Qaddafi was an especially great subject). Now, they just watch like perfunctory comic "Mad Lib"-like templates  (though "The Miley Cyrus Show" had its moments), each edition indistinguishable from the next. But Jay Pharoah's Principal Frye was on fire as he tried to rein in the high-school revelers in at the "Hooray for Abstinence Valentine's Dance" — no easy task when the punch is spiked with ecstasy and someone has decided to liberate the turtles from the science lab and set them on the dance floor. In his arguably best performance of the night, Bieber plays the head of the social committee, a geeky virgin whose virtue is being challenged by his extremely randy girlfriend, played by Nasim Pedrad.

Tune in next week for host Christoph Waltz and musical guest Alabama Shakes.