A confrontation with a protester reveals that 10 years later, the neocon architects of the war remain unrepentant 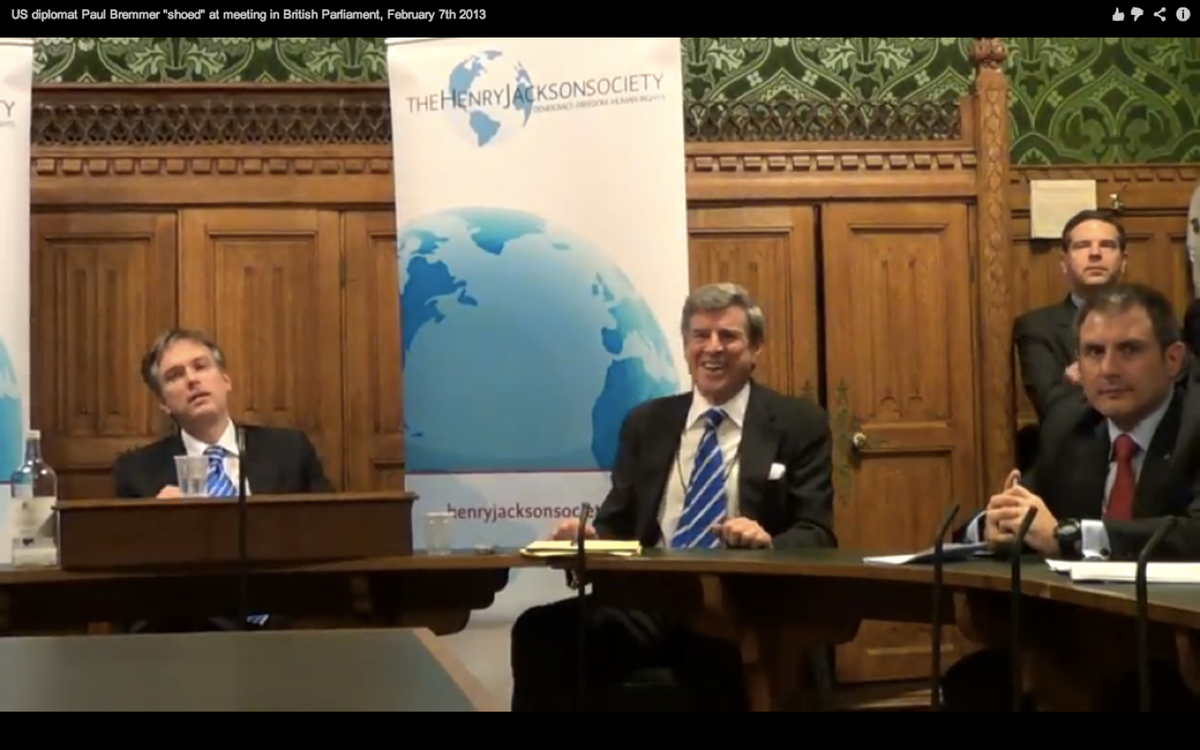 Paul Bremer reacts after a shoe is thrown at him at an event organized by the neoconservative Henry Jackson Society in London.
--

This past week, while giving a speech at an event organized by the neoconservative Henry Jackson Society in London, former U.S. civil administrator of Iraq Paul Bremer was confronted by the legacy of the human catastrophe he had helped facilitate during his tenure in that country. In an incident captured on video, an Iraqi man in the crowd who stood up to address the panel and said that he had been forced to flee Iraq after “the U.S. destroyed my country” threw both his shoes at a seemingly stunned Bremer before being removed from the event. In the commotion afterward he can be heard to yell “You f***** up my country, you destroyed the country. F*** you and f*** your democracy.” After regaining his composure and suggesting that the Iraqi man “improve his aim if he wants to do things like that,” Bremer addressed the quieted crowd by saying, “If he had done that while Saddam Hussain had been alive he would be a dead man right now.” Upon hearing Bremer’s words of proud reassurance, the gathering of neoconservative think-tank intellectuals burst into applause -- a moment emblematic of the arrogance that legal impunity has generated for the architects of one of the worst humanitarian disasters of the 21st century. For Bremer -- who often refers critics to "the Iraqi people" when questioned over the country's monumental cost in human suffering during his civil administration -- to be confronted by one of those very same Iraqis and still maintain his hubristic defiance is indicative of his moral bankruptcy and that of the neoconservative movement for which he remains an esteemed representative.

In a legitimately meritocratic society governed by the rule of law, it would be reasonable to expect that after presiding over an unmitigated strategic and humanitarian calamity such as the Iraq War neoconservatives such as Bremer would face legal charges or at least devastating career repercussions that would exclude them from taking part in public discourse -- but regrettably this has not happened to a great degree. While it is true that former Bush administration figures such as Donald Rumsfeld, John Yoo and Dick Cheney have been subject to criminal charges in countries around the world from Germany to Malaysia, many of those most prominently associated with the neoconservative movement in America are still making an impact pushing the same policies of aggressive military action and disregard for the rule of law that they were a decade ago. Figures such as John Bolton, Elliot Cohen and Bremer’s former spokesman, Dan Senor, can still be found in the public sphere peddling the same criminally disastrous political ideology that killed and made refugees out of millions in Iraq while costing the United States trillions of dollars, thousands of soldiers’ lives, and much of its moral and political legitimacy in the Middle East. The stated refusal of the Obama administration to “look back” at past transgressions has in many ways made possible the repetition of such crimes at a particularly crucial moment as the U.S. crafts a policy to confront an alleged nuclear program in Iran. In what would seem to be a case of history repeating as farce, the same neoconservative hawks who cynically pushed claims about weapons of mass destruction are publicly singing the exact same tune today about Iran and trying to resurrect the same aggressively militaristic ideology.

Bremer himself, formerly the effective vice-regent of Iraq during its military occupation, is perhaps the most visceral example of a man whose ability to escape legal sanction for his actions has engendered a sense of hubris that could potentially one day again make him as damaging to the United States and the world as he was nearly a decade ago. After a tenure as Coalition Provisional Authority administrator over the country where he disastrously dissolved the Iraqi army, lost billions of public dollars to corruption and graft, presided over the destruction of the country’s museums and cultural history, ordered the muzzling of civilian newspapers, oversaw the torture scandal at Abu Ghraib, and granted legal immunity to American contractors who would later take advantage of it to commit wholesale public massacres of Iraqi civilians, Bremer returned to life in the United States  without facing censure for the monumental disaster his tenure had created for the Iraqi people nor for his role in grievously mismanaging American strategic interests in the region. Upon returning to private life, Bremer would say of the war that he helped facilitate that “Iraq is a better place” and that the consequences of the invasion and occupation were “absolutely worth it.” Stating that Iraq was, in his opinion, peaceful, Bremer also made several other disastrously incorrect predictions including that the country would have a stable and sovereign government in place for a handover of power by 2004. While he cynically portrayed a positive picture of development and progress in the country of which he was the effective governor, his spokesman would tell journalists that “off the record, Paris is burning.”

Bremer’s own worldview gives insight into the callousness with which he viewed his role as well as the civilian population he was administering. While the Bush administration proclaimed that the invasion had been an effort to liberate Iraq, Bremer stated his position regarding Iraq that: “We’re going to be running a colony almost.” After evidence of his own incompetence and brutality toward Iraq during his administration began to mount and commensurate hostility toward U.S. presence in the region began to build, he would attribute his own perceived blamelessness in the situation – as the self-described colonial administrator of a militarily occupied country – to the fact that “These people hate the United States not for what we do, but for who we are and what we are.” Today, in addition to being a vocal critic of the Obama administration and frequent guest speaker at neoconservative think-tank events, Bremer is an advocate of Samuel Huntington’s “Clash of Civilizations” thesis and warns of the need to confront growing Muslim populations in Western countries. Proudly unremorseful for his central role in the biggest American foreign policy disaster of the past generation, Bremer today lives peacefully free from the threat of legal blowback for his actions and has, incongruously enough, become known for producing oil paintings of nudes and landscapes of the New England countryside from his home in Vermont.

From time to time the bubble of self-assurance and hubris that wealthy and powerful individuals manage to build for themselves are burst by those who are the victims of their excesses. The Iraqi man who threw his shoes at Bremer in London, like the millions of other Iraqis who were killed, maimed or forced to leave their homes as refugees – as well as the thousands of American soldiers and their families who paid the ultimate price due to the war and occupation Bremer helped prosecute – represent the nameless and usually voiceless victims of unchecked official criminality. While there may be some degree of fleeting emotional satisfaction in seeing an ostensible war criminal such as Bremer publicly humiliated, until the American government decides to formally “look back” at the crimes of the "War on Terror" era, real justice will remain elusive and the very real possibility of a replay of its worst transgressions will continue to exist.