Wish list for the new pope: Would anything bring you back to the church?

Might the next pope embrace contraception or same-sex marriage? We asked lapsed Catholics what they want to hear 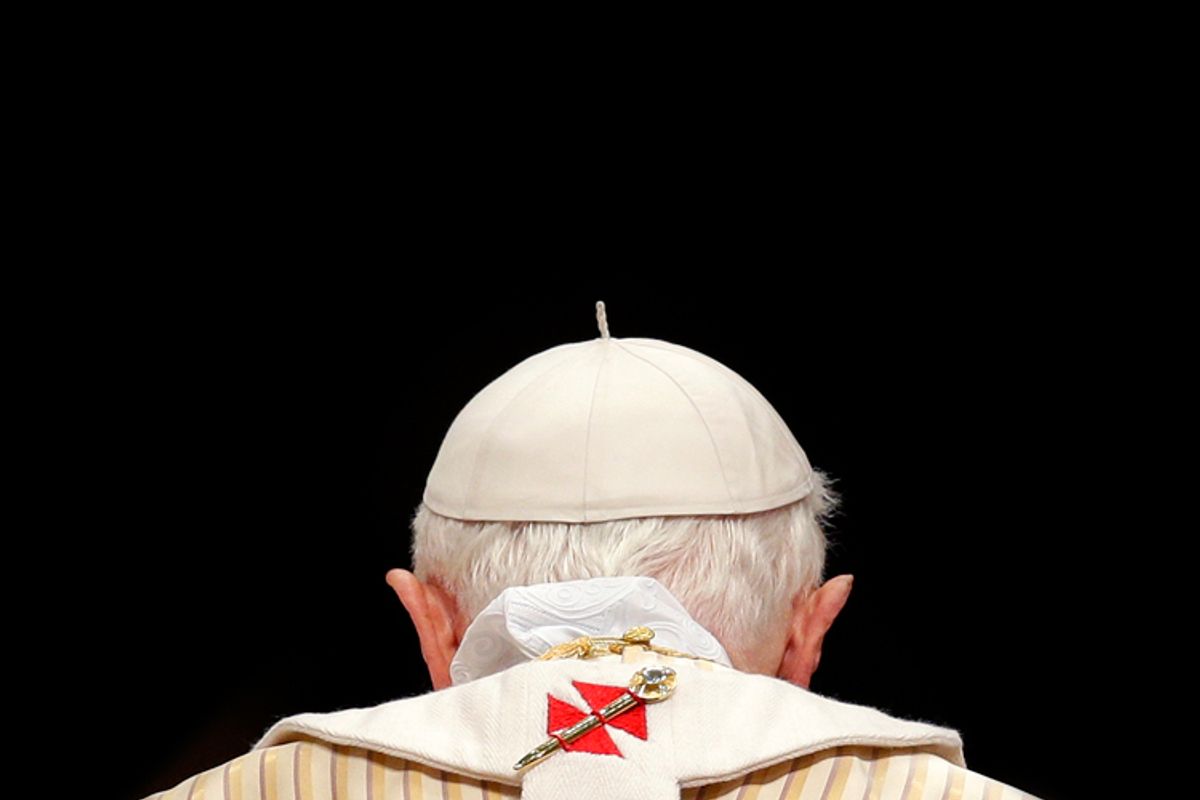 One out of every 10 Americans is an ex-Catholic, according to the U.S. Religious Landscape Survey by the Pew Research Center’s Forum on Religion & Public Life. If lapsed Catholics were a separate denomination, they would be the third-largest religious subgroup in the country.

That's a lot of people.

But faith is a fraught and deeply personal thing for so many of us, and religious experience can't always be neatly captured with labels or quantified through survey data.

So when Salon asked our lapsed Catholic readers if Pope Benedict XVI's resignation might signal a new direction for the church -- and what that might mean for their beliefs -- the responses we received expressed a thoughtful, sometimes painful, engagement with ideas of faith, family and community.

Like so many other Catholic "in-betweeners," Eleanor Parker Sapia hasn't left the church but struggles to reconcile its conservative doctrine with her progressive values.

"I don't consider myself an ex-Catholic, but instead a fair weather Catholic in the church's eyes ... I would return to the fold if my church pardoned third-world debt, allowed women to take birth control and if the Vatican sold its riches to feed and clothe the hungry, their flock. I'm tired of seeing the riches of the Vatican, golden crosses, opulence, while many of my fellow men, women and children suffer. The church, my church, is out of touch. But I know plenty of good priests and nuns in my church who still embody goodness, humanity and love."

Many who were raised Catholic said that orthodoxy at the expense of compassion obscured the values that meant the most to them in their youth. As Charlayne Denney wrote:

"My hope is that the next pope decides to put less emphasis on Paul and more on Jesus. Allow priests to marry, allow women in the priesthood. Open up the church to Jesus’ teachings on gays (there were none so why disparage them?) ... Families right now are split by the actions of the church in regards to divorce, remarriage and gay members. I hope the next pope will embrace all of the members of the human race and bring the family of God together, inclusion instead of exclusion."

"The church needs to stop teaching shame. There is such a deep-seated belief that people are inherently bad that is taught from such a young age, the idea of original sin itself, that instills a sense of guilt and wrongness essentially from birth. If the church focused more on the actual teachings of Jesus, those of love, acceptance and equality (especially that of women), rather than the idea that there is something 'wrong' with people, I think it could go a long way toward appealing to more people, especially young people."

Aimee McHale Wayling struggled for years to maintain a relationship to the church, but reached her breaking point with the appointment of Pope Benedict XVI:

"While I think of my Catholic heritage as part of who I am, the papacy of Benedict XVI sealed my departure from the church that I once loved ... My conscience, my reason and my own experience of God’s love have ultimately led me to believe that the hierarchy of the Catholic Church is far more concerned with the perpetuation of conservative Catholic dogma than it is to the propagation of a faith based on the radical inclusivity and boundless love of Jesus Christ. When I was growing up in the 1970s, we used to sing a song at Mass that proclaimed that “they will know we are Christians by our love.” Now, it seems more apt that “they will know we are Catholics by our adherence to the Magisterium,” adding, "I have no hope that this will change any time soon, with Benedict or without him."

McHale Wayling articulated a common theme among readers: The church is just too far gone to return to. As Kathleen Delpha wrote:

"The church is going to have to lose the hierarchy in order for me to fully come back. I cannot reconcile my life as an educated, conscientious person with the medieval style of decision making and loyalty demands. Absolute power corrupts, and we have seen ample evidence of this through the church scandals."

Gregory Mysko has a wish list for the next pope, but doesn't expect anything will change:

"It would be refreshing for the Catholic Church to take a realistic view on contraception and abortion. But I don't see that happening no matter who is chosen to be the next pope. There are many valid spiritual paths one can choose. Catholics have a choice."

Rather than signaling a progressive shift away from a papacy rocked by sexual abuse coverups and a hard-line approach to women's reproductive rights and sexual health, Chris Lerch worries the next pope will lead the church even further in the other direction:

"I think Benedict's resignation won't affect the status quo. Unlike his predecessors, he will be able to influence the choosing of his successor. That means the church will continue to distance itself from the reforms of Vatican II. There was optimism in the late '60s and '70s that the church was changing, and that you would see a turn away from dogma and toward a modern model. Everything seemed possible: an equal role for women, a reevaluation of birth control, a welcoming of all people to the Sacraments. Instead we had regression and a hard conservative line that continues to drive more and more Catholics away."

For Jane Smith, a lack of transparency isn't only incompatible with her religious experience, but with a generation that values open access to information and questions everything:

"You can’t expect individuals to follow blindly anymore. We live in the Instant Information Age; we will not be shut down when we question.  We will not be cast out when we ask why.  We’ll just look it up, form our own opinions and leave the fossils buried in the dirt, when we walk away. I’ll always believe in God, but I’ll never follow anyone quite so blindly again."

The church is out of touch, so much so that Claire Celsi left it to none other than Taylor Swift to express her feelings:

"In the words of Taylor Swift, I would 'never, ever, ever' become a Catholic again. Or any religion, for that matter. About 10 years ago, I was a practicing Catholic and very involved in my church. Over the period of about a year, I slowly realized that the Catholic Church was a biased, out of touch and broken institution that was completely irrelevant to my life. I could no longer justify the amount of time and energy I had put into the church, even though I loved the people I met there.

"Specifically, it was the teachings on birth control, women's roles in the church (especially the witch hunt on nuns), and the church's sex scandals and protection of pedophiles that caused me to leave and now I'm an atheist. I realized that each religion has its own untenable ancient beliefs that defy not only reality but are irrelevant to modern life ... The hypocrisy was too stark. I'm out."