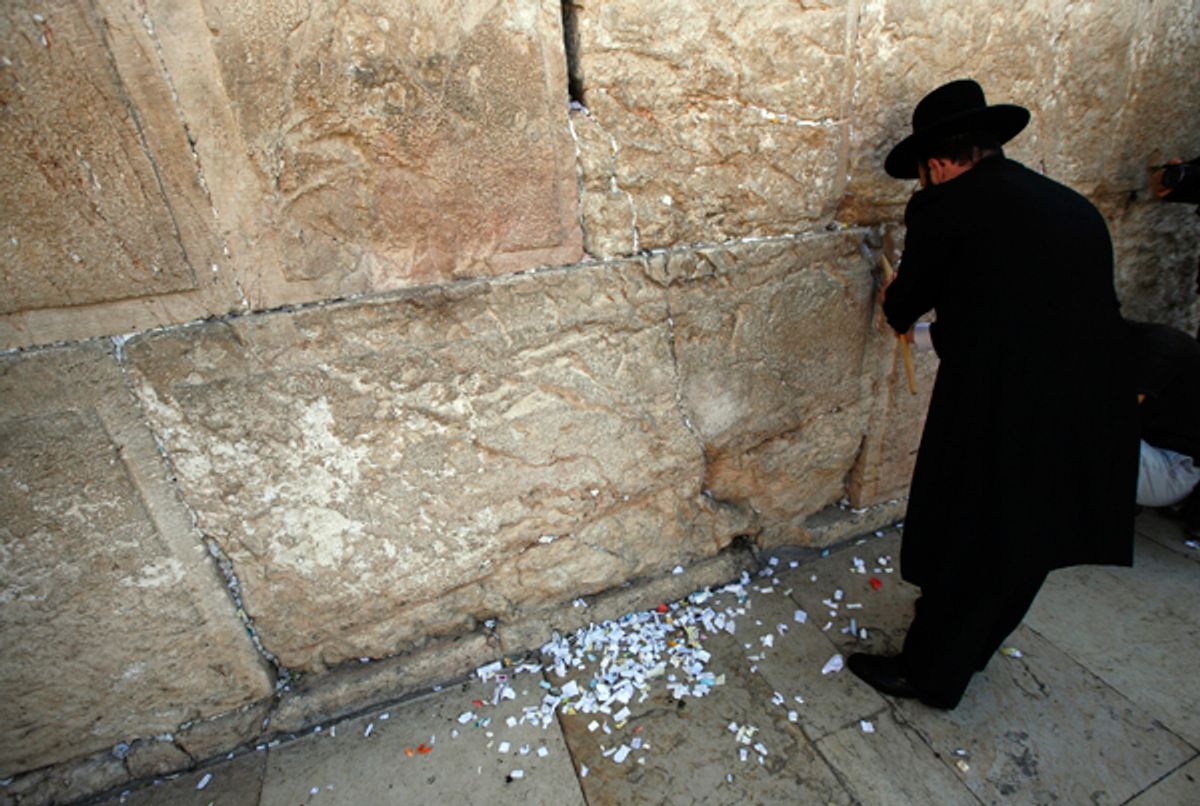 JERUSALEM — A group of Jewish women gathered in prayer Monday at the Western Wall to mark Rosh Chodesh, the beginning of the new lunar month.

Even as they gathered to pray, police closed in. The women fell to the ground, unwilling to be dragged away.

Police did not want to be seen apprehending women at prayer, so they stepped back, waiting. Only after the service ended did police arrest 10, including three American rabbis: Robyn Fryer Bodzin, Debra Cantor and Susan Silverman, sister of famed comedienne Sarah Silverman.

Their crime? Being women wearing traditionally male religious garb at what is considered the holiest of Jewish sites.

The Western Wall is the last remnant of the original Temple of King Solomon, destroyed during the Babylonian invasions. It has been mentioned in Jewish texts since the fourth century and has, under the Law of Holy Places, been de facto designated as an Orthodox synagogue where the sexes pray separately.

The clash between Israeli authorities and the religious activist group Women of the Wall is another sign that the "status quo" between secular Jewish society and the religious-political establishment in Israel is at a breaking point.

The so-called "status quo" was negotiated by Israel's first prime minister, David Ben-Gurion, who offered subsidies to ultra-Orthodox Jewish scholars devoting their lives to study in the wake of the Holocaust. In exchange, the ultra-Orthodox accepted the rule of a civilian state in the place of the Messianic revelation they had hoped for.

Over time, that bargain has fossilized into a knotted system of state-sponsored religious customs that fewer and fewer Israelis are willing to tolerate.

In the push for an end to the monopoly of Orthodoxy in Israel, the tide may now be turning.

The hot-button issue in the last election was the military draft for ultra-Orthodox teenagers, just as it is for every other Israeli teenager.

On Monday, the man who nearly took those elections, Israeli journalist-turned-politician Yair Lapid, addressed the matter head on.

"There will be no civil war," Lapid said in his first speech at the Knesset, Israel's parliament. "Ten percent of the population cannot threaten the remaining 90 percent with a civil war."

In a sign of how fraught the matter is, both the mayor of Jerusalem and the prime minister declined to comment on Monday's events.

The Women of the Wall even gained the support of three paratroopers who secured the Western Wall from Jordanian hands in 1967, during the Six Day War. The paratroopers joined the group on Monday, calling for the wall's "second liberation."

"The incidents yesterday regard what is allowed and what is not allowed," said police spokesman Mickey Rosenfeld. "Women may not wear 'talitot' [prayer shawls] at the Western Wall. These are provocative incidents."

The police rely on an amorphous 2003 Supreme Court decision stating that people who wish to pray at the Western Wall must "abide by the customs of the place." No specific prohibitions are mentioned.

Religious authorities offered her group an alternate place to pray near the wall, called Robinson's Arch.

"Separate is not equal. We do not see Robinson's Arch as a holy site. So we will continue," Sachs said.

Rabbi Shmuel Rabinowitz, chairman of the Western Wall Heritage Foundation, which is a quasi-governmental body that oversees the wall, told GlobalPost that the women were relocated to Robinson's Arch for their own safety, to protect them from the potentially violent reactions of ultra-Orthodox women.

None of the other women observed wandering by the Women of the Wall group at 7 a.m. Monday appeared perturbed.

"We found them an alternate spot at Robinson's Arch where they can express their behavior in the way they wish," Rabinowitz said. "But they insist on being in the women's section of the Wall, in the midst of other groups who they bother."

Robinson's Arch, he insists, bears "the same holiness [as the Western Wall]."

For Rabbi Silverman, a Bostonian who has lived in Israel for the last seven years, the matter is theological and urgent.

"When a small group of people — in this case Orthodox men — believe that they hold the truth, that is idolatry," she told GlobalPost. "They may not be holding an idol in their hands but they are holding it in their minds."

When asked what her sister, the bawdy comedienne, would say, Rabbi Silverman laughed.

"I know exactly what my sister would say but I'm not going to tell you!"

Sarah Silverman, in characteristic fashion, had her own say via Twitter:

Women have been pushing for more religious rights in Israel for decades. Last month, Anat Hoffman, a Women of the Wall leader and former Jerusalem City Council member, was handcuffed at the Western Wall.

Israeli media reported the arrest widely and the ensuing scandal prompted Prime Minister Benjamin Netanyahu to create an independent task force to investigate "practical solutions that will ensure that the Wall is a place that unites Jews in Israel and around the world."

On Tuesday, the Reform movement, a flag-bearer of secular Judaism in Israel, filed an appeal to the Supreme Court demanding equality in state funding for its rabbis and claiming "discrimination in that the state has not internalized its responsibility to ensure equality."