It wasn't his scrambling for a bottle of water Tuesday night. It was his insipid speech mixing calumny and cliché 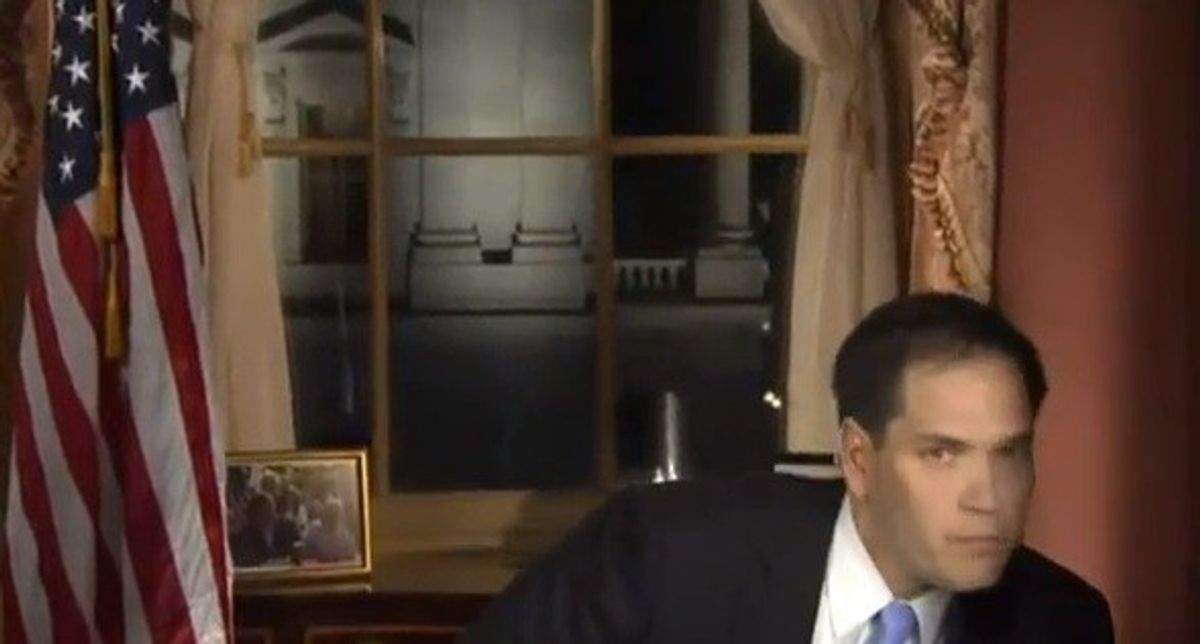 It's not his fault, really. Maybe it was understandable nervousness — after all, here he was just a few days after being anointed "The Republican Savior" in a Time magazine cover, following the president, but without an applauding crowd to feed off. Or maybe it was that the room was hot and dry. Whatever the cause, after trying to wipe the sweat from his brow and face for 12 long minutes and repeatedly moving his tongue around his mouth to get some moisture going, Marco Rubio decided he just had no choice but to bend down and grab that tantalizing little bottle of water that lay just out of reach.

So don't blame him for that, even though he'll no doubt get plenty of mockery for it today. You can blame him, however, for the insipid speech he delivered, a combination of calumny and cliché that demonstrated just why Republicans are having such problems appealing to voters. Let's start with this:

Presidents in both parties – from John F. Kennedy to Ronald Reagan – have known that our free enterprise economy is the source of our middle class prosperity.

But President Obama? He believes it's the cause of our problems. That the economic downturn happened because our government didn't tax enough, spend enough and control enough. And, therefore, as you heard tonight, his solution to virtually every problem we face is for Washington to tax more, borrow more and spend more.

OK, so that's not what the President said in his speech, and hearing from a Republican that Barack Obama hates free enterprise ceased to surprise a long time ago. And though Obama has certainly placed part of the blame for the economic downturn on insufficient government oversight of capital markets, the idea that he ever once blamed it on insufficient spending and taxation is obviously, plainly, absurdly false, a lie by any definition of the term. But that doesn't surprise, either. What is remarkable is that just a few paragraphs after falsely attacking the president's motives, Rubio says this: "There are valid reasons to be concerned about the president's plan to grow our government. But any time anyone opposes the president's agenda, he and his allies usually respond by falsely attacking their motives."

Come to think of it, that mixture of dishonesty and self-pity may be just what Republican primary voters are looking for in 2016. And one thing they may also be looking for is the assurance that not only are we God's favorite country, but life everywhere else is an unending nightmare of opportunities denied and dreams dashed. If so, Rubio is ready to oblige:

This dream – of a better life for their children – it's the hope of parents everywhere. Politicians here and throughout the world have long promised that more government can make those dreams come true.

But we Americans have always known better. From our earliest days, we embraced economic liberty instead. And because we did, America remains one of the few places on earth where dreams like these even have a chance.

Really? America is one of the few places on earth where people can dream of a better life for their children? Oh please. The truth is that economic mobility in America is lower than in many similar countries (the result of a decades-long trend, and not Barack Obama's fault, for what it's worth). The "only in America" canard is a longtime pet peeve of mine, so I have to ask: Why is it necessary to extol our country's virtues by claiming that those virtues are ours alone? Why is it so hard to say that we value hard work and opportunity, and so do many other societies?

Maybe Marco Rubio is the Republican savior. Lots of politicians have given one crappy speech and then gone on to great things, most notably Bill Clinton, whose speech nominating Michael Dukakis at the 1988 Democratic convention was panned for being both dull and ponderously long. Before you know it, this one will be little more than the source of the occasional chuckle, and Rubio will rise or fall on what he does in a hundred other settings. But it just goes to show that with a few rare exceptions (like this one), delivering the opposition's response to the State of the Union is likely to do your career more harm than good. If Rubio thought he'd be the one to buck that history, he didn't get much more for his trouble than a dry mouth.