A conservative nightmare: Every time you use Gmail, you're helping the left consolidate power 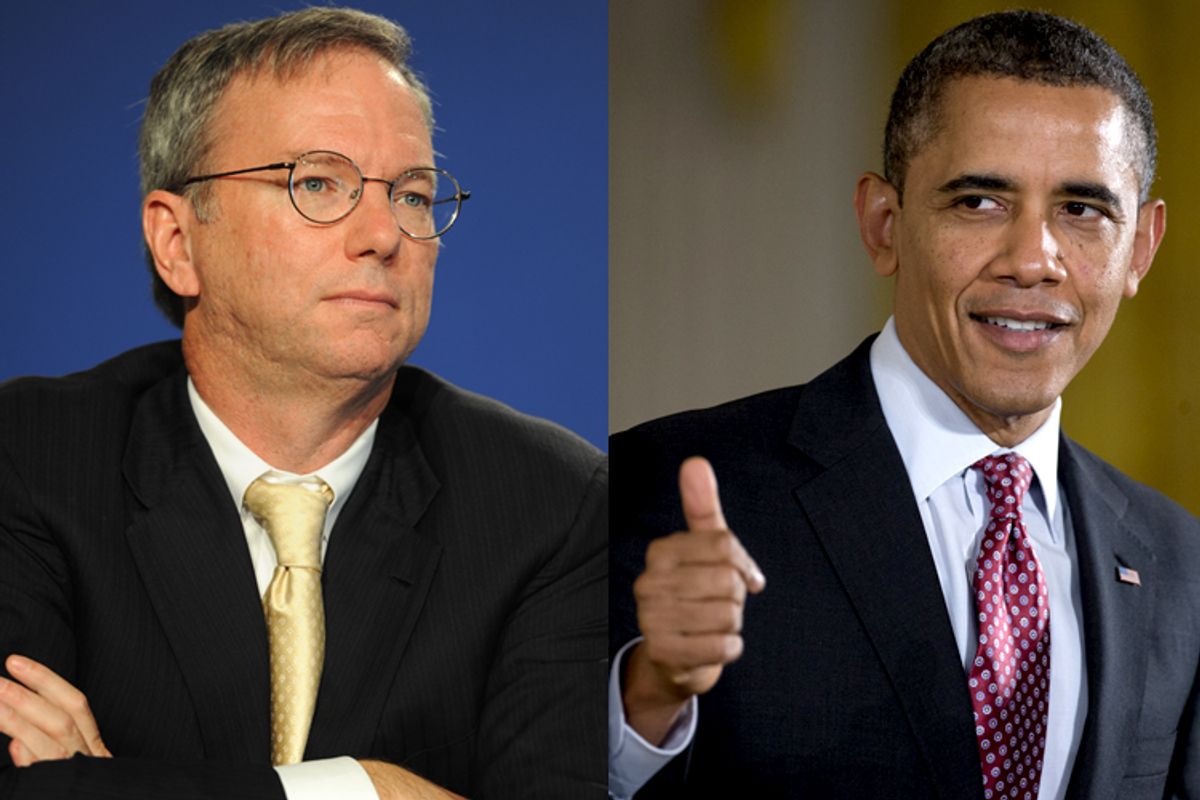 The right wing has its own news network and its own version of Wikipedia. Is a conservative search engine the next natural step?

That's the only logical conclusion one can draw from a very worried post at RedState warning that Google may be operating as a "private intelligence agency" for the Democratic Party.

I stress the word "may" here because author Ben Howe doesn't include any, you know, evidence in his article demonstrating that Google is Obama's secret weapon, but still, it's pretty scary! -- "Every time you use Google or Gmail you could be contributing just a little bit more of your behavioral data to the left."

Howe's working assumption is that the 2012 Obama campaign's well-known superiority on the technological front could and should be linked to Google's well-known leftist sympathies. (Joe Biden did a Google+ "hangout" on gun control! The company supports "net neutrality" -- which everyone knows is just a whisker away from state seizure of the means of online production). From there it's just a hop, skip and jump to Google reading your email and reporting its contents to the commissars in the White House.

Remember that enormous, sophisticated data operation the Obama campaign had? The one that gave them massive daily data on public opinion trends in almost every segment of potential voters.

It’s almost as if Democrats had access to some sort of huge database of real time information about what the public was reading or writing online. The kind of breathtakingly large, real-time data that could be used for real-time trend analysis, predictive modeling and even behavioral manipulation.

Imagine how much more could be learned if Google’s computer algorithms combined not only search data but also all of the data they get by reading everything written in or sent to Gmail and whatever you store on Google docs and Google Drive. Then imagine what Democratic voter data groups like Catalist (which launched as a for-profit operation, allowing it much more latitude in working with outside groups….or companies) could do with that data.

With a few tweaks to their algorithms Google could easily have near perfect insights into the voting behaviors and patterns of the U.S. population at large down to specific precincts, neighborhoods or even households.

No doubt about it, Google knows a lot about us, and I'm as worried as anyone at the prospect of advertisers taking advantage of the data Google collects to engage in behavioral manipulation. (Although, from a classically conservative standpoint, I suppose that's the kind of normal, laudable behavior we should expect from profit-seeking entities operating in a free market.) But I'd like a little more of a smoking gun before we start suggesting that every time we search for "crazy right-wing conspiracy theory" on Google we are helping to consolidate the Democratic Party's hold on power.

The most interesting thing about Howe's piece is the way it zeroes in on Google's ability to read our mail. The privacy alarm jibes quite nicely with the latest iteration of Microsoft's "Scroogled" campaign, which warns with unbecoming stridency about how Google is reading everything you write to your loved ones, and targeting ads based on your content.

I continue to be befuddled by the spectacle of Microsoft, which makes a profit by screwing as much cash out of my pocket as possible, presenting itself as the good guy compared to the evil Google, which makes a profit by selling ads on a vast number of useful tools it makes available for me to use for free. And you can make a case that Microsoft is unfairly creating the impression in its ad campaign that real live Google employees are scanning your mail, which is of course not true at all. But the campaign isn't the dumbest idea in the world. Privacy is a hot-button issue for consumers, and I'm always surprised to learn how many people don't realize that Google is targeting ads to them based on algorithmic crunching of keywords in their email.

I hope Microsoft goes even further -- I'd love to see Microsoft back up its "Scroogled" campaign by lobbying for strong electronic privacy protections in new legislation. Such a stance would put the company at sharp odds with just about every other big tech company operating online.

But I think Microsoft is still missing the big market opportunity here. Conservatives seem to crave an alternative to Google. Microsoft is desperate to grab more market share for Bing.

Isn't the solution obvious? With conservative blogs already warning that Google is a dangerous outfit of leftist sympathizers it's time for Bing to start positioning itself as the Fox News of the search engine world.

Irony alert: The mastermind behind the Scroogled campaign is Mark Penn, the longtime Clinton political operative, a fact that would make a Microsoft shift to the right just a little juicy. But stranger things have happened in politics. And if conservatives are at the point where the only way to explain Barack Obama's victory in 2012 is to assume he had some unfair Google-turboboosted advantage, they clearly need a search engine that will only return results that support their preconceptions. This is Bing's big chance!