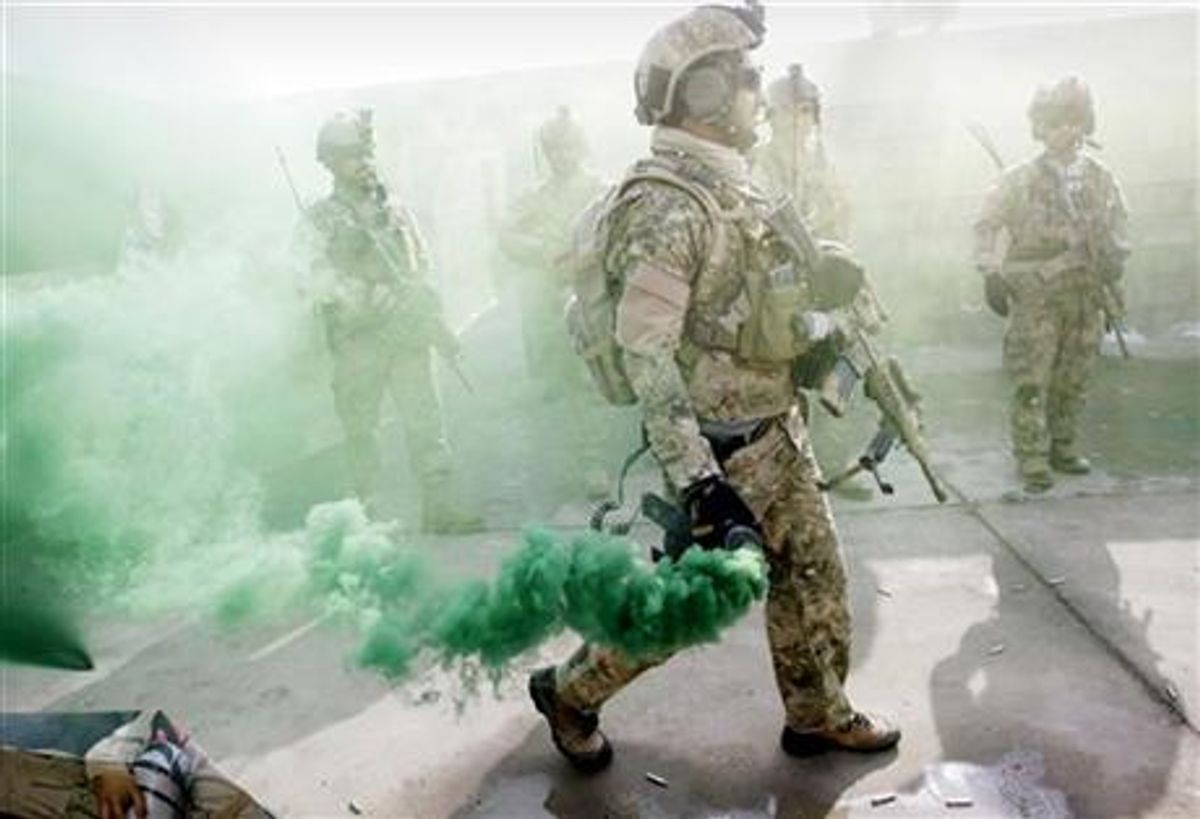 "If men can carry out this duty why not women?" asks Lena Abdali, a 23-year-old Afghan soldier who was one of the first women to join one of the special units in 2011.

Night raids have long been a divisive issue between Afghan President Hamid Karzai, who doesn't want foreign troops entering Afghan homes, and the U.S.-led coalition that says the raids are essential to capturing Taliban commanders.

Many Afghans, however, have complained that the house raids are culturally offensive. Having male troops search Afghan females is taboo. So is touching a family's Quran, the Muslim holy book, or entering a home without being invited. Another focus of anger has been the disregard for privacy and Afghan culture because women and children are usually home during the raids.

The raids now are conducted jointly by U.S. and Afghan forces, but the female Afghan special forces soldiers play an important role. Their job: Round up women and children and get them to safety while guarding against the potential dangers of female suicide bombers or militants disguised in women's clothes.

The missions have taken on increasing importance and the Afghan government and the U.S.-led coalition have stepped up training of the Afghan special forces as international troops prepare to end their combat mission in 23 months.

President Barack Obama announced earlier this week that he will withdraw about half of the 66,000 U.S. troops now in Afghanistan within a year. He did not spell out what U.S. military presence would remain after 2014.

Afghan women have been part of their nation's security forces for years, but they didn't start being recruited for the special forces until 2011. Defense Ministry spokesman Gen. Mohammad Zahir Azimi said more than 1,000 women were in the army — a small fraction of the total force of 195,000.

The role of female soldiers also has come under debate in the United States after the Pentagon decided last month to open up front-line combat jobs to women.

Col. Jalaluddin Yaftaly, the commander of the joint Special Unit of the Afghan National Army, said villagers don't like foreign forces to carry out operations in their homes, but they have welcomed the Afghan special forces units and cooperated with them in many operations.

On a recent frigid winter morning, an Afghan special forces unit, comprising 30 men and women soldiers, drilled at a training center in Kabul.

As part of the exercise, the unit was told that an insurgent leader was hiding in a house and women and children were inside with him.

The men on the team prepared to raid the house and arrest or kill the target. Abdali and two other female colleagues were tasked with making sure no women or children were harmed during the operation.

The most dangerous part of their assignment was the possibility that the main target was hiding among the women — perhaps in disguise — so Abdali and her colleagues had to stay alert to make sure they themselves were not attacked while getting innocent women and children out of harm's way.

The military advantages to having Afghan female special forces soldiers, however, have not yet offset the social issues women like Abdali face in doing their jobs.

A woman conducting night raids with male soldiers in a conservative country like Afghanistan is still not socially acceptable. Before she starts to fight the enemy in military operations she has to struggle with her family, relatives and others who might disapprove.

Abdali said that while she hides her occupation from many family members because of security concerns, she is proud to fulfill a duty she feels is important to her homeland.

"If I will not come and put my life in danger for the women and culture in Afghanistan, then who will do this?" she asked.

Abdali wears a traditional Afghan headscarf under her helmet, but otherwise she is clad in an army uniform and heavy flak jacket just like the men. Her weapon and equipment is heavy, but she runs with it along the peaks of snow-covered mountains, unpaved roads under the hot summer sun and on rugged paths in remote areas of the country.

"Women must show their bravery and power by carrying out this duty as men do," Abdali said as she loaded her weapon to take part in the drill.

"Move to your vehicles!" the unit commander shouted.

The unit ran from their formations to six armored vehicles and started toward the target. Along the way, the commander repeated a description of the house where the Taliban leader was believed to be hiding and instructed the unit on how to surround it and arrest the suspect.

The special forces soldiers crawled on the snow-covered ground up to the house.

"You have no place to hide. Please surrender yourself," one soldier shouted.

After a gun battle, four or five special forces soldiers entered the house and secured the area. The female soldiers then went in and escorted the women and children outside.

Abdali questioned two ladies and three small boys after they were shepherded to safety. She was trying to collect information to help her team while keeping them busy and distracting them from the violence.

The men in her unit see the benefits of having the female special forces at their side.

Agha Sharin Noori, an Afghan special forces soldier who has served in the unit for two and half years, said, "In a military operation, we need our sisters as much as we need our brothers."