Cruise ship nightmare is almost over for weary passengers 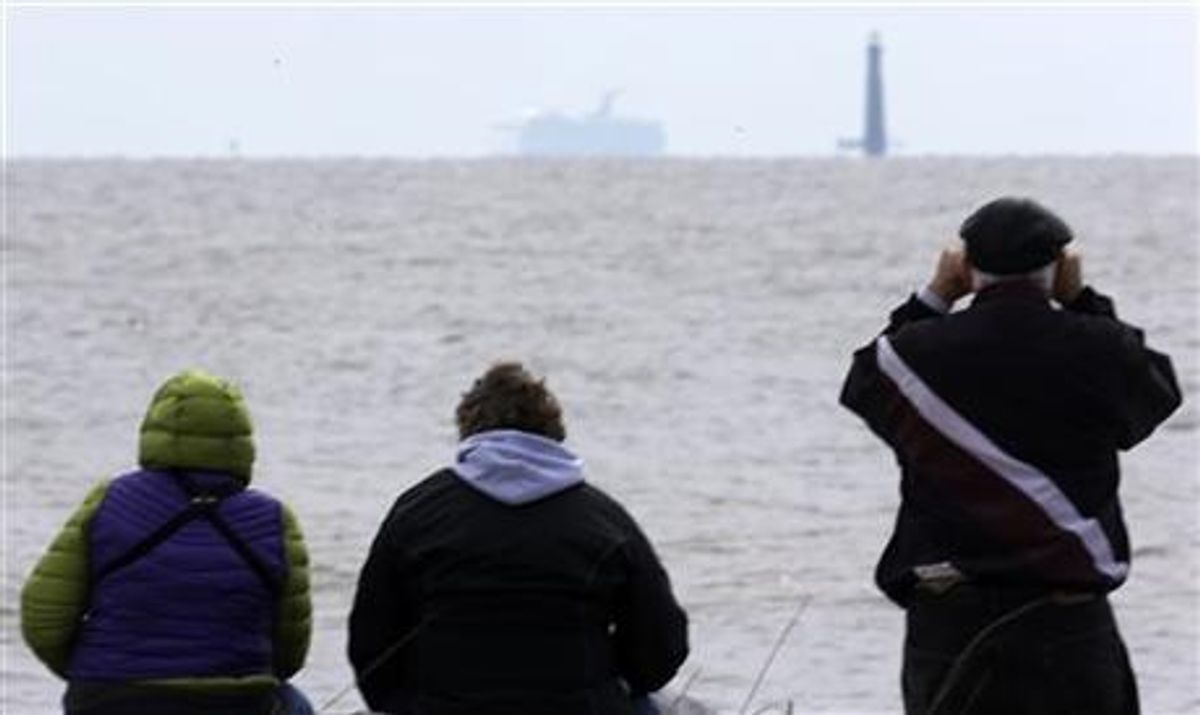 MOBILE, Ala. (AP) — This is not at all how it looked in the brochure: Pulled by a tugboat at a maddeningly slow pace, the ill-fated cruise ship Carnival Triumph finally drew within sight of land on Thursday as miserable passengers told stories of overflowing toilets, food shortages, foul odors and dangerously dark passageways.

Around midday, four days after the 893-foot ship was crippled by an engine-room fire in the middle of the Gulf of Mexico, the more than 4,200 passengers and crew members suffered another misfortune when the towline snapped, bringing the vessel to a dead stop just when it was getting close to port.

The towline was quickly replaced, and the crawl to Mobile resumed. The ship was expected to arrive around midnight Thursday. Officials said it would take passengers up to five hours to get off the ship, and then they faced an hours-long bus ride or other travel hassles to finally get back home.

Frustrations with the cruise line simmered on and off the ship, as passengers and their relatives questioned why it had taken so long to get back to dry land. The ship left Galveston, Texas, a week ago.

Television images from CNN showed passengers with signs of "Help" and "I love you" hanging from their cabin rooms.

As the vessel drew within cell phone range, passengers vented their anger.

Renee Shanar, of Houston, was on board with her husband, who has heart trouble. She said they were told they will be among the first to disembark.

"I don't believe them they've been lying to us from the beginning," Shanar said.

Disgusted by the foul air and heat of the lower decks, many passengers hauled mattresses and bed sheets onto the top deck and slept there, even staying put in a soaking rain. As the ship approached the coast, a slew of Carnival workers arrived, removed the bedding and took it downstairs.

"Today they cleaned the ship, they're serving better food, covering up basically, but at least they're making it more bearable," said Kalin Hill, of Houston, who boarded the Triumph as part of a bachelorette party.

Shanar they were initially only given cold cuts, like turkey and vegetable sandwiches. Then another cruise line dropped off hamburgers and chicken sandwiches, but the line for that fare was nearly four hours long.

"There's poop and urine all along the floor," she said. "The floor is flooded with sewer water ... and we had to poop in bags."

The 14-story ship must negotiate a tricky, shallow shipping channel before docking. The channel narrows to 400 feet inside Mobile Bay, and the ship was about 115 feet wide. It was traveling about 5 mph.

Shanar said food was been distributed on the 9th floor, making it difficult for some of the elderly to get it. They were initially given cold cuts, like turkey and vegetable sandwiches. Then another cruise line dropped off hamburgers and chicken sandwiches, but the line for that fare was nearly four hours long.

"And then people started getting sick from the food," she said.

The company disputed the accounts of passengers who described the ship as filthy, saying employees were doing everything to ensure people were comfortable. Carnival didn't immediately respond to questions the illnesses reported by some passengers.

"This is going to be a long day," Thornton said. "There is no way we can speed up the process."

When passengers arrive in Alabama, their stay will be short. Carnival said they were being given the option of boarding buses directly to Galveston, Texas, or Houston — a roughly seven-hour drive — or taking a two-hour bus ride to New Orleans, where the company said it booked 1,500 hotel rooms. Those staying in New Orleans will be flown Friday to Houston. Carnival said it will cover all the transportation costs.

"I can't imagine being on that ship this morning and then getting on a bus," said Kirk Hill, whose 30-year-old daughter, Kalin Christine Hill, is on the cruise. "If I hit land in Mobile, you'd have a hard time getting me on a bus."

Thelbert Lanier was waiting at the Mobile port for his wife, who texted him early Thursday.

"Room smells like an outhouse. Cold water only, toilets haven't work in 3 1/2 days. Happy Valentines Day!!! I love u & wish I was there," she said in the text message, which was viewed by The Associated Press. "It's 4:00 am. Can't sleep...it's cold & I'm starting to get sick."

Carnival spokesman Vance Gulliksen said the company tried to keep families updated and established a toll-free number for friends and relatives. Gulliksen said about 200 Carnival employees were in Mobile waiting to assist passengers upon their arrival.

The ship was about 150 miles off Mexico's Yucatan Peninsula when an engine room fire knocked out its primary power source, crippling its water and plumbing systems and leaving it adrift on only backup power.

Carnival Cruise Lines has canceled a dozen more planned voyages aboard the Triumph and acknowledged the crippled ship had been plagued by other mechanical problems in the weeks before the engine-room blaze. The National Transportation Safety Board has opened an investigation.

Gulliksen said the Triumph's recent mechanical woes involved an electrical problem with the ship's alternator on the previous voyage. Repairs were completed Feb. 2, and the problem was not related to the fire, he said.

Passengers were supposed to get a full refund and discounts on future cruises, and Carnival announced Wednesday they would each get an additional $500 in compensation.

Once docked, the ship will be idle through April.

Plushnick-Masti reported from Houston. Associated Press writers Bob Johnson in Montgomery, Ala., and Melissa Nelson-Gabriel in Mobile contributed to this report.