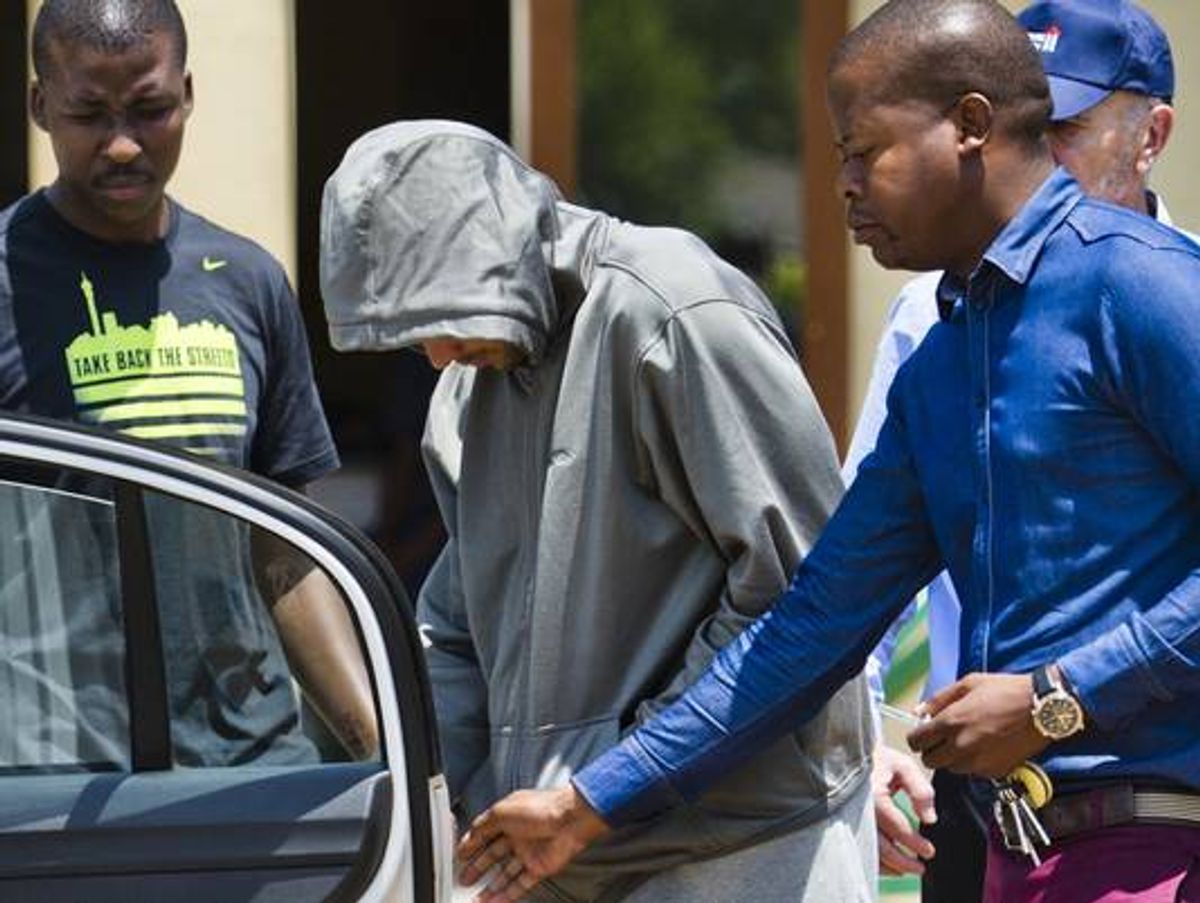 Olympic sprinter Oscar Pistorius has been charged in the shooting murder of his girlfriend Reeva Steenkamp. Pistorius will spend the night in jail while he awaits a bail hearing on Friday morning. Police have said that they plan to oppose bail in the case.

Steenkamp was a model, law school graduate and vocal advocate for women's rights in South Africa, who was "continuously breaking the model stereotype," according to her publicist Sarit Tomlinson.

Steenkamp was scheduled to deliver an inspirational talk to students in Johannesburg on Thursday, and, as recently as Sunday, had used her considerable social media presence to raise awareness about violence against women in the country:

"I woke up in a happy safe home this morning. Not everyone did. Speak out against the rape of individuals in SA. RIP Anene Booysen. #rape #crime #sayNO," she posted to her Instagram followers. Booysen was the victim of a brutal gang rape and murder earlier this month.

Media profiles of Pistorius paint a far more troubling portrait. In an interview with Michael Sokolove for the New York Times, Pistorius talked openly about his love of guns, crediting them for helping him sleep when he felt restless:

“We should go to the range,” he said. He fetched his 9-millimeter handgun and two boxes of ammunition. We got back in the car and drove to a nearby firing range, where he instructed me on proper technique. Pistorius was a good coach. A couple of my shots got close to the bull’s-eye, which delighted him. “Maybe you should do this more,” he said. “If you practiced, I think you could be pretty deadly.” I asked him how often he came to the range. “Just sometimes when I can’t sleep,” he said.

In the same article, Pistorius aludes to a reflexive tendency to grab his gun when he felt threatened, as he recalled to Sokolove:

As he put together lunch for all of us — fruit smoothies, breaded chicken fillets he pulled from the refrigerator — he mentioned that a security alarm in the house had gone off the previous night, and he had grabbed his gun and tiptoed downstairs. (It turned out to be nothing.)

Olympic sprinter Oscar Pistorius was arrested on Valentine's Day after he shot and killed his 30-year-old girlfriend, "FHM" cover model Reeva Steenkamp, in his home in Pretoria, reports the New York Times.

The 26-year-old Paralympic champion, the first double-amputee to run in the Olympics — he competed in the London Games, reaching the semifinals of the 400-meter —  was taken into custody after the shooting early Thursday morning at his home. According to the Associated Press, Lt. Col. Katlego Mogale, a police spokeswoman, said officers arrived at the scene after receiving a call about a shooting in the runner's home, and found paramedics treating a 30-year-old woman for gunshot wounds. Pistorius apparently shot his girlfriend — a law-school graduate and model he'd been dating for the several months — in the head and arm, although the circumstances surrounding the incident were unclear, reported Johannesburg’s Talk Radio 702. The local media in South Africa was saying that Pistorius told the police the shooting was an accident and that he mistook Steenkamp for a burglar. Which isn't a far-fetched claim: South Africa is plagued by one of the worst violent crime rates in the world, and especially break-ins by armed robbers, reports the New York Times. Handguns are legal, though there are restrictions.

The BBC reports that police were "surprised" to hear a claim that Steenkamp had been mistaken for a burglar because there had been previous incidents at the address, which they described as "allegations of a domestic nature." The officers said they'd been interviewing witnesses and would oppose any appeals for bail.

The woman was pronounced dead and the sprinter was taken into custody. Col. Mogale said officers found a 9-mm. pistol in Pistorius's home. Col. Mogale said Pistorius was expected to appear in court later today — though the BBC has just reported that it has been delayed until Friday.

The South Africa's Sports Confederation and Olympic committee released a statement, after being "inundated" with requests for comment, but were not in a position to give out any details of the shooting, saying it would be inappropriate to comment because of the ongoing police investigation.

"SASCOC, like the rest of the public, knows no more than what is in the public domain, which is there has been an alleged fatal shooting on the basis of a mistaken identity and an apparent assumption of a burglary," the South African Olympic committee said. "The organization is in no position to comment on the incident other than to say our deepest sympathy and condolences have been expressed to the families of all concerned."

Pistorius made historical strides for the physically challenged, after campaigning for years to be allowed to compete against able-bodied athletes when he became the first double-amputee track athlete to compete in the Olympics. Now he is not only South Africa's most famous athlete, but among the most famous athletes in the world. He lost his legs before his first birthday, due to a congenital condition (he was born without fibulas), and was initially banned from competition because his prosthetics are carbon fiber blades, which critics said gave him an unfair advantage. But in 2008, the sport's highest court gave him the go-ahead to run at the top events.

The New York Post reports that on Wednesday, Steenkamp was eagerly anticipating her Valentine's Day with Pistorius. She tweeted, "What do you have up your sleeve for your love tomorrow???"