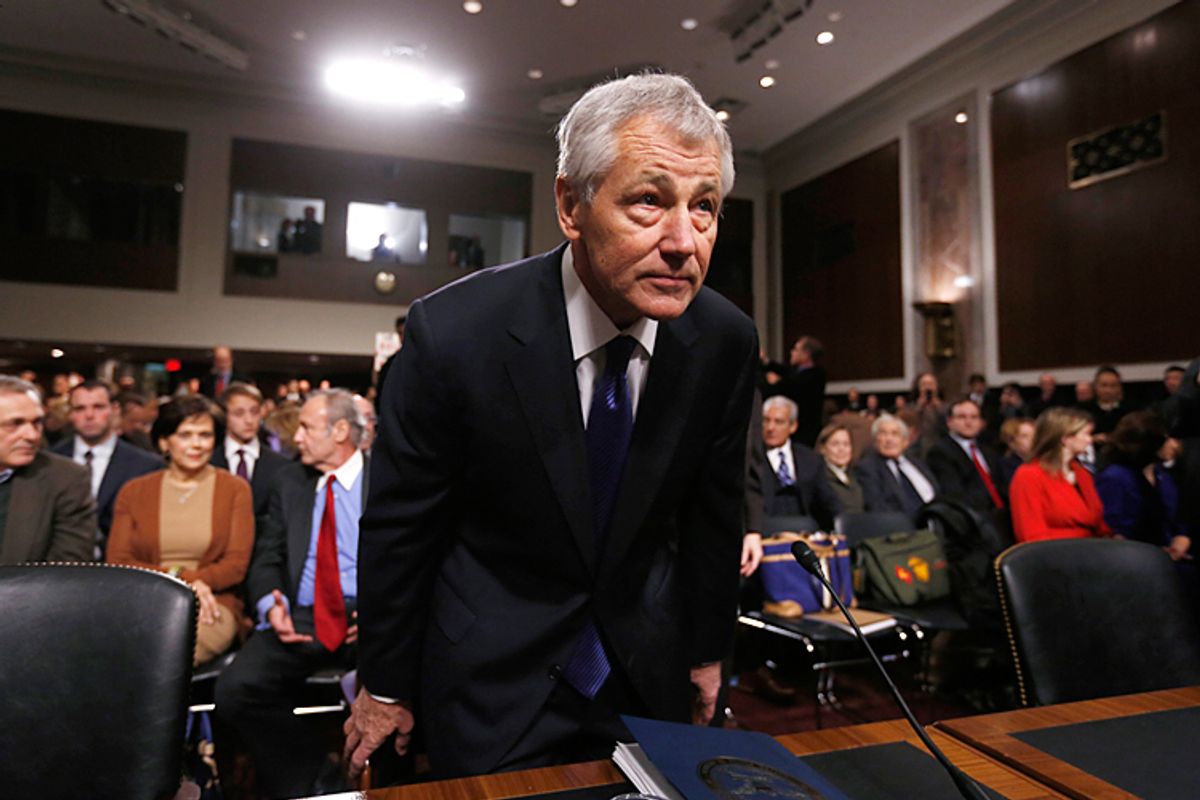 Last year, facing unprecedented Republican obstruction to the president's agenda, Senate Majority Leader Harry Reid came to the Senate floor with a big admission: "These two young, fine senators said it was time to change the rules of the Senate, and we didn't. They were right. The rest of us were wrong -- or most of us, anyway. What a shame ... I am almost embarrassed,” he said, referring to two Democrats who wanted to curb the power of the filibuster.

That was in May of 2012. Now, 10 months later and facing unprecedented Republican obstruction of Chuck Hagel’s appointment to be secretary of Defense, Reid may be wishing he had heeded his own advice a bit more, and forged a stronger package of filibuster reforms.

"Are there chickens in Nevada? Because unfortunately, our friend Harry Reid's filibuster-reform chicken is coming home to roost,” quipped Adam Green, the co-founder of the Progressive Change Campaign Committee, which advocates for stronger filibuster reform.

The issue that prompted Reid's admission on the Senate floor last year was a weak deal he had struck with Minority Leader Mitch McConnell to limit Republicans’ use of the filibuster. Reformers, like Sens. Jeff Merkley and Tom Udall -- the two young senators to whom Reid referred -- had pushed Democrats to use an untested move to change the Senate’s rules on its first day in session by a simple 51-vote majority, instead of the typical 67.

Institutional-minded senators of both parties balked at the idea, worried about setting a precedent when they were in the minority or about losing their own individual power, so Reid went with the weaker handshake deal instead.

Almost immediately, it was apparent that handshake deal didn’t go nearly far enough, and Reid had the humility and wherewithal to admit it, on the Senate floor, for the CSPAN cameras and everyone. Merkley was even acting as the presiding officer that day. The reformers were thrilled and excited to get meaningful reform when Congress reconvened in January of 2013 and they had another shot at using the first day option.

But when the new Senate started last month, that didn’t happen. Reid threatened to use the 51-vote “nuclear option,” but instead cut a much weaker filibuster reform deal negotiated by Democratic Sen. Carl Levin and Republican John McCain. The deal shortens the amount of time necessary for a cloture vote to break the filibuster on some presidential nominees, but specifically exempts Cabinet picks, like Hagel.

Now that limits of that deal, just weeks old, are showing the Hagel fight and Washington is having a bit of déjà vu. “This is the first time in the history of our country that a presidential nominee for secretary of Defense has been filibustered. What a shame,” Reid said on the Senate floor yesterday of the GOP obstruction, even repeating the same "what a shame" phrase from his May speech.

A spokesperson for Udall says the Hagel hold shows the need for a reexamination of the rules. "The first filibuster of a Secretary of Defense in history shows the Senate very well may need further rules reform. The proposal by Senators Udall and Merkley would not have prevented this filibuster – they never intended to take away that right to debate. But under their proposal, filibustering a cabinet nominee would have required a sustained effort. If they failed to do so, a majority of the Senate would be able to move forward," said spokesperson Marissa Padilla.

Progressive reformers have little sympathy for Reid, as they say this was largely foreseeable, since Republicans abandoned the idea of governing in good faith years ago, and have instead exploited every opportunity available to obstruct President Obama’s agenda.

"The Hagel nomination is just the first of many crucial fights in this Congress where we'll look back and ask ourselves why Sen. Majority Leader Reid lacked the courage to fix the filibuster when he had the chance," said Becky Bond, the political director of CREDO, the activist group and mobile phone provided that pushed for a stronger rules change in January.

"Any Republican senator can effectively shut down the Senate on a whim or at the behest of any right-wing special interest. Why Sen. Harry Reid decided to keep enabling Sen. McConnell and obstructionist Republicans instead of avoiding another two years of gridlock just defies logic,” she added in a statement to Salon.

And it’s not just Hagel. Forty-three Republican senators -- enough to block a cloture vote -- led by McConnell are now threatening to oppose any nominee to head the Consumer Finance Protection Bureau unless substantive changes to the Dodd-Frank agency are made. This is little more than an undemocratic power grab to exploit the Senate's arcane parliamentary rules to make law, even though voters didn’t give them the majority necessary to do so.

Senate aides say privately that Reid is open to taking another look at rules reform, but unfortunately the window has already closed on the best moment for it. The first day of the new session comes with the unique ability to change the rules with 51 votes, and that ship has now sailed. There is a more radical “nuclear option” available (the one Democrats railed against in 2005 when they were blocking George W Bush’s judicial nominees), but that may go even further than reformers want to go.

UPDATE: Senator Merkley tells Salon: "Merely weeks after the Senate came together in a good-faith effort to fix the Senate’s problems, Senate Republicans are now engaging in the first-ever filibuster of a Secretary of Defense nominee. It is deeply disappointing that even when President Obama nominates a former conservative colleague of the GOP caucus, the minority is abusing the rules and the spirit of ‘advise and consent.’  If our step we took last month is to be successful, extraordinary stunts like today’s filibuster can’t happen.”