The country's crime rates have declined in recent years, but remain frighteningly high by international standards 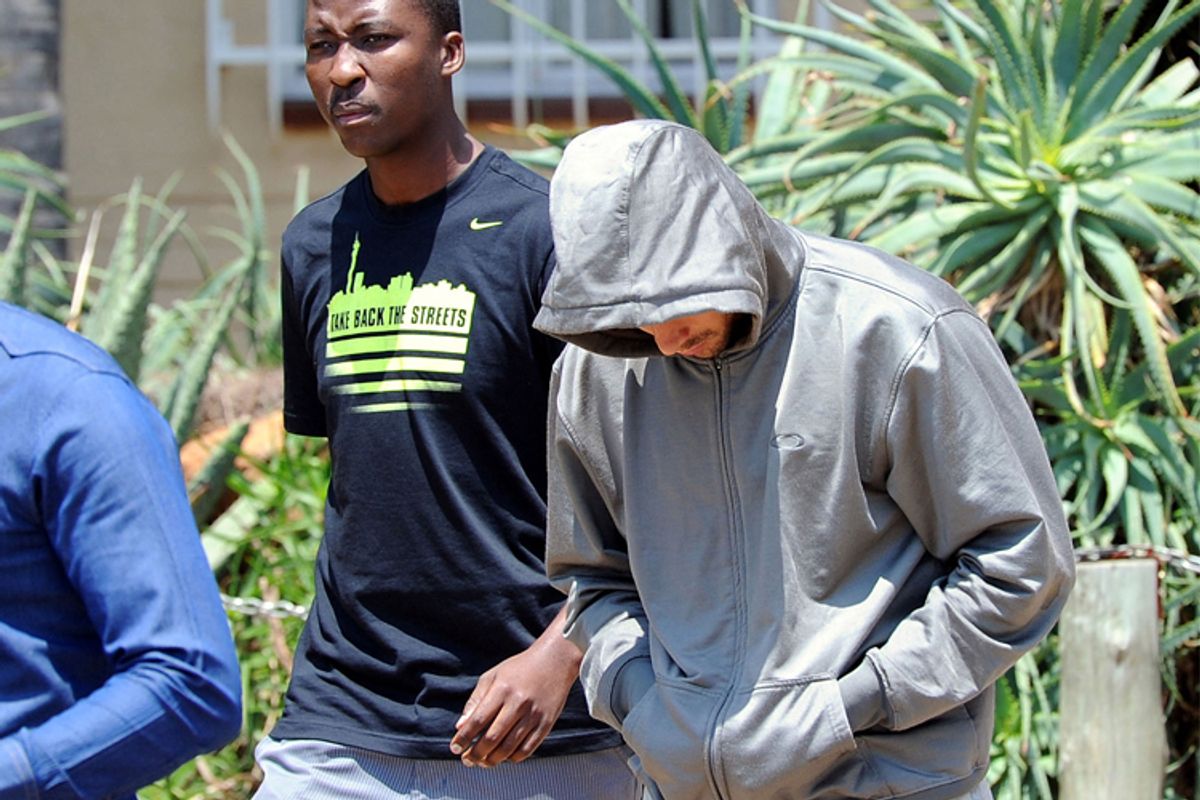 But on Valentine’s Day, it all went disturbingly wrong.

South Africans awoke to the news that their country’s most famous sportsman had been charged with murder, accused of shooting and killing his gorgeous model girlfriend Reeva Steenkamp in the early hours of Thursday morning.

The motive behind 29-year-old Steenkamp’s murder is still unclear. Police have confirmed that a 9mm revolver recovered at the scene was registered to Pistorius, who in past interviews had spoken of his love of firearms and once tweeted a photo of himself visiting a shooting range.

Pistorius, 26, spent the night in a Pretoria jail cell, and on Friday will appear in court for a bail hearing. Lawyer Kenny Oldwage said at the police station that Pistorius “is emotional, but he is keeping up."

The Blade Runner’s sponsors are already pulling ads, including one for Nike in which he describes himself as “the bullet in the chamber,” and is pictured bursting out of a starting block.

South Africans appear bewildered by this turn of events. The country has in recent weeks been gripped by national soul-searching over endemic violence in society, and in particular by high rates of violence and rape against women.

While there were early reports that Pistorius may have shot his girlfriend multiple times because he thought she was a burglar, police have firmly dismissed the rumor.

Brigadier Denise Beukes, a spokesperson for the national police, told reporters outside the luxury golf estate where Pistorius lives that there was no sign of forced entry, and only two people were on the premises — the resident, and the deceased.

Police had been to Pistorius’ house before to deal with "allegations of a domestic nature," Beukes added.

Adele Kirsten, a spokesperson for Gun Free South Africa, said women in this country face a particular threat of gun violence in the home, and are most likely to be killed by someone they know.

“One of the keys is access to weapons,” she said. “So if you look at Oscar, it is clear he had easy access to guns.”

“People get angry, people get in fights, but if you have a gun, it can be lethal.”

While South Africa requires strict background checks before guns may be purchased, and a follow-up check after five years, enforcement can be patchy.

Kirsten said she hoped the death of Steenkamp would be a “defining moment” for South Africa, one that would lead to a ban on hand guns.

“But I’m not sure,” she added. “We are so inured to violence. This happens daily and it doesn’t get coverage. This is all because a celebrity is involved.”

Violent crime rates in South Africa have declined in recent years, but still remain frighteningly high by international standards. Gun ownership of both illegal and registered weapons remains common, and many South Africans own weapons for protection.

An interviewer last year wrote that Pistorius, who lives in a high-security gated community, slept with a revolver by his bed, a baseball bat behind his door and a machine gun by the window.

Examples of tragic gun deaths, a number of which involving the country’s sports stars, are all too common.

In September, former world heavyweight boxing champion Corrie Sanders was shot and killed when robbers stormed a restaurant near Pretoria during a family birthday party and began firing at random.

That same week, a former Olympic hurdler was shot in the shoulder during a robbery at her family farm northwest of Johannesburg.

The country’s Olympic committee said it has been “inundated” with inquiries about the shooting at Pistorius’ home, but was “in no position to comment.”

Just hours before her death, Steenkamp tweeted messages urging her followers to stand up against abuse of women. She had also tweeted about 17-year-old Anene Booysen, whose recent gang rape and murder in the Western Cape town of Bredasdorp outraged the country.

“What do you have up your sleeve for your love tomorrow???” she wrote on Twitter, later adding: "It should be a day of love for everyone."