The hunt for Christopher Dorner, which injured innocent civilians, reveals how little the department has changed 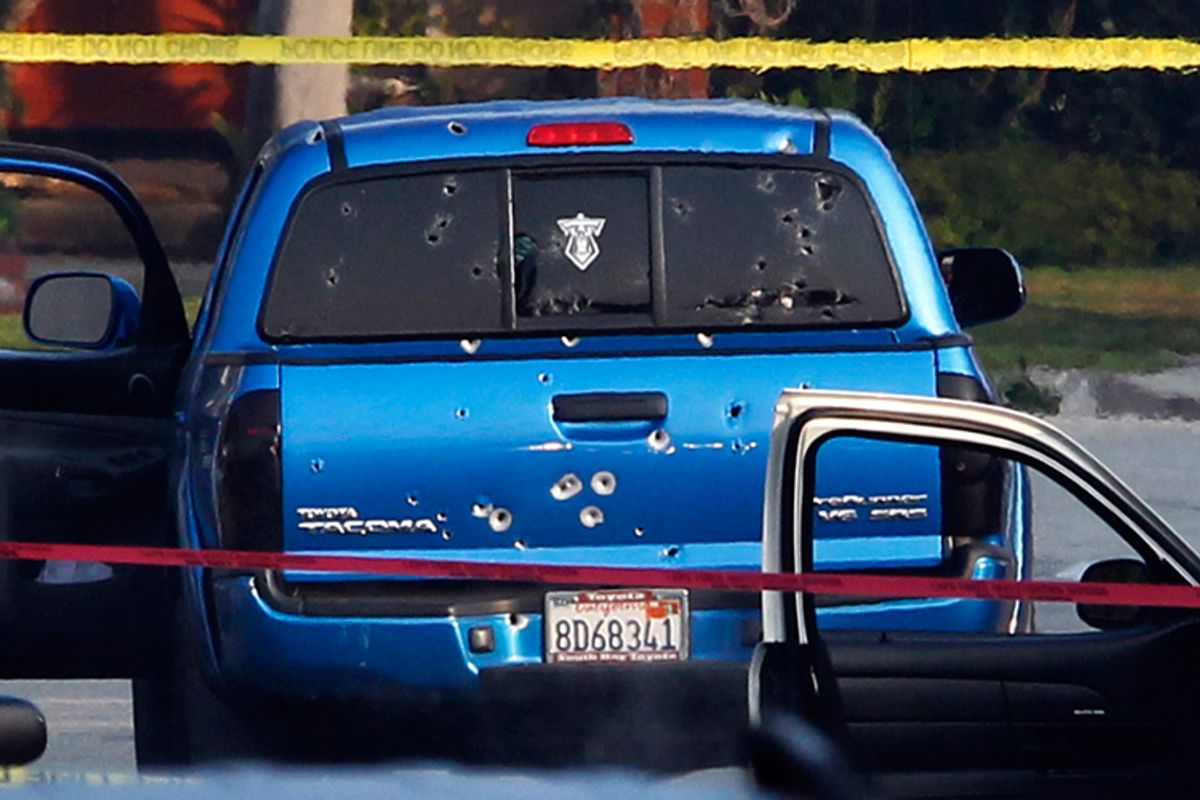 In hunting down Christopher J. Dorner, hell-bent on murderous revenge over being fired from the Los Angeles Police Department, officers twice fired without warning on three innocent civilians, wounding two of them.

That innocent people get shot by cops who think their own safety is paramount, whose actions show they value their own lives more than those of people they are sworn to protect, is part of a major problem in America that has not abated much despite decades of efforts to make policing more professional and less brutish. It is the policy of police departments that police cannot kill innocents to save themselves, in effect, that sometimes your sworn duty is to die. But, on the streets, it is far too often another story entirely.

The victims of this Feb. 7 police violence bore no resemblance to Dorner or his vehicle. The deranged Dorner drove a gray Nissan Titan pickup, while LAPD fired a fusillade into a bright blue Toyota Tacoma pickup from behind, while minutes later Torrance, Calif., police rammed a black Honda Ridgeline pickup and then fired three shots.

Dorner was a large, even hulking, black man. In the blue truck were two Hispanic women. Torrance police shot at a surfer, a white male slight in stature.

Luckily none of these innocents died, though one of the women was shot in the back.

Both LAPD Chief Charlie Beck and the Torrance police quickly issued statements excusing this murderous conduct, a rush to judgment that shows how “to protect and serve” sometimes means “to protect our own.” But valuing police lives more than those of others has a long history in policing and especially in Los Angeles and its surrounding communities. So does a long history of racism in police departments that many officers of all colors have fought with limited success.

Over the last three decades LAPD officers have shot people who tossed a typewriter at them from further than the machine would fly, as well as people who threw, or just threatened to throw, knives from distances of 10 feet or more, posing not much of a risk to the officers. They have shot people who were naked and unarmed, or who police said they thought were armed because of a glint of metal or because they mistook a water pistol for a real gun.

LAPD officers, of course, have also come under actual and scary attacks, like the 1997 shootout in North Hollywood with armored bank robbers whose assault rifles spewed more than 1,100 rounds over 44 terrifying minutes before both were fatally shot by courageous officers with far less powerful weapons.

The issue is one of balance. And that includes recognizing that when you take the oath to become a police officer you never acquire the right to shoot innocent people. The LAPD teaches recruits that they assume the risk that they may have to give up their life to protect innocents, a lesson often forgotten on the streets.

Tom Bradley raised this problem of police putting their safety ahead of those they are sworn to protect shortly after he was elected mayor in 1973.

Bradley told me in 1981 that he asked Police Chief Ed Davis to explain why 300 officers were assigned to rooftop and perimeter patrols at police divisions (called precinct houses in most cities). Davis said police needed protection from armed criminals, citing an infamous incident in the mostly black South Central area where several people stood up at a meeting and urged killing officers.

Years later it came out that those urging attacks on police were all undercover officers, part of a massive worldwide LAPD spying operation in which some officers posed as leading communists and radicals for two decades, including officers in Havana and Moscow. (Doubters are invited to read "Chief: My Life in the LAPD," by the late Daryl F. Gates, especially pages 72 and 23, as well as my articles about LAPD spying, brutality and mismanagement in the Los Angeles Times in 1980 until early 1983.)

Mayor Bradley said he told Chief Davis that “if armed men inside police stations need protection then unarmed citizens of this city need it more – now get those men out on the streets.” Davis soon put these officers back on the streets.

Bradley was the first black lieutenant on the LAPD and the second black mayor of a major American city (Carl Stokes was first in Cleveland). He was also the grandson of a slave and the son of sharecroppers, a family history that gave him an intense interest in racial equity.
Bradley told me about the racism he dealt with as an officer, including how the department’s culture made some black officers perceive black citizens as greater threats than whites. He reminded me that one of the two officers in the fatal police shooting of Eulia Love, who had threatened a bill collector from the natural gas utility and then threw a knife in the direction of officers who were a safe distance away, was black.

Deputy Chief Lou Reiter told me in 1981 that one police captain repeatedly instructed his officers to treat all blacks as criminal suspects, which made Page One news in the Los Angeles Times. When I asked Police Chief Daryl Gates for his response, Gates compared himself to Jesus Christ and called Reiter his Judas. The captain kept on promoting his racist doctrine.

The official message is that racism and violence against innocents is not tolerated, but comments like those by Chief Gates back then and Chief Beck now send a very different signal. So does the police disciplinary system, which has allowed some of the officers involved in notorious acts of unwarranted LAPD violence, like the 1991 Rodney King beating, to rise to become sergeants, lieutenants and captains.

Racist talk by officers, including the N-word, formed part of Dorner’s manifesto,
a diatribe that also asserted that acts of dishonesty and unprovoked violence permeated the LAPD. Chief Beck has reopened the Dorner case, promising to examine the now dead officer's accusations. Don’t hold your breath.

A major problem that enables police violence has been chronicled by Joseph Wambaugh, the LAPD sergeant turned novelist. The first novel he wrote, “The Blue Knight,” is built around the courtroom destruction of Bumper Morgan, one helluva street cop whose aging eyes could not have seen what he testified that he saw, even though he got the facts right.

This is known as “testilying,” a theme Wambaugh returned to often in his later books. Senior officers who were appalled by testilying instructed me on its fine points, during the three years I covered LAPD management, revealing its brutality, failure to solve crimes and massive political spying operation, which included using undercover officers as agents provocateur to initiate violence.

In the months ahead we may get sworn testimony about the two Feb. 7 shootings during the Dorner manhunt. Then again, maybe not, as California has a law that protects police officers who are not criminally charged from even being identified.

The more troubling incident was the shooting in the back of Emma Hernandez, a 71-year-old grandmother who at 5 that morning was slowly driving down suburban streets with her daughter delivering the Los Angeles Times when she was shot in the back as she rode in a pickup truck with her daughter, Margie Carranza, 47. Officers coming up from behind opened fire, not taking one or two shots and then assessing, as they are taught by the LAPD, but unleashing a fusillade.

Chief Charlie Beck gave what is a well-practiced LAPD response to shots fired without warning at innocent, unarmed civilians, calling it "a tragic misinterpretation" by officers working under “incredible tension.” There is another word that more accurately describes such conduct, which is way outside of LAPD policy: "criminal."

The official LAPD manual says that the “guiding value when using force shall be reverence for human life,” a policy impossible to reconcile with the Feb. 7 shooting. LAPD officers are only authorized to use deadly force when it “reasonably believed to be an imminent threat of death or serious bodily injury.”

The L.A. Times, citing unnamed law enforcement sources, reported that at least seven officers fired on the women, striking the truck at least a dozen times as well as nearby cars, trees and garage doors.

Richard Goo, five bullet holes in his nearby house, asked the right question: "How do you mistake two Hispanic women, one who is 71, for a large black male?" An equally good question is how police in suburban Torrance just minutes later mistook a slight, white male for the hulking, black suspect.

Shooting innocent people in the pursuit of a clearly murderous suspect like Dorner is not just wrong, it is indefensible. The question is whether it will result in disciplinary action against not just the officers in the two shootings – who should at least be fired if not indicted – but against the command staff whose first reaction was to defend the conduct.

David Cay Johnston, a Pulitzer Prize-winning investigative reporter who met Trump in 1988, is the author of "The Making of Donald Trump," his third New York Times bestseller.