"The Bay Lights," 25,000 LEDs strung along a network of cables, will be the largest display of its kind anywhere 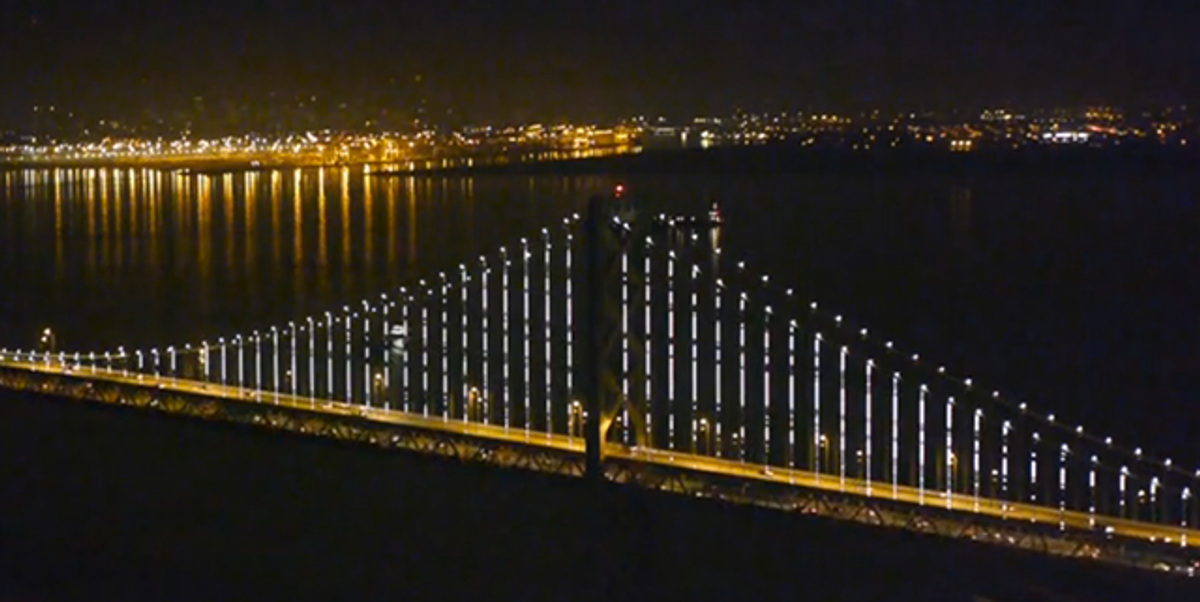 The western span of theSan Francisco Bay Bridge is coming alive. Starting March 5, it will light up nightly with 25,000 LEDs strung along its network of support cables, turning into the largest light sculpture in the world. In a preliminary test video of the installation by American artist Leo Villareal, the LED sparks flicker and dance along the length of the bridge, giving the inert structure a whimsical, digital personality that befits the technology capital of the U.S.

Villareal’s project, “The Bay Lights,” is a public art project that stretches 500 feet high and 1.8 miles long. The lights are controlled by algorithms through a program run on the artist’s laptop, causing different patterns to ripple over the course of the bridge. As seen in the video below, the LEDs sometimes illuminate in shimmering bands like sunlight on top of waves. At other times they are vertical, waterfall cascades or oscillating bands, like a visualization of an online data transfer or an extremely elegant version of hard drive defragmenting. When the piece officially opens on March 5, various sequences will be running at the same time, in combinations randomly generated so the bridge will never look the same twice.

The artist (who also created a new installation for New York City’s Bleecker Street subway station) got his start making light installations at none other than the Burning Man festival, where light plays a pivotal role: he created an LED piece to mark his campsite so he could easily find it after nights of partying, according to a Buzzfeed profile. “The Bay Lights” provides a similar kind of grounding for all of San Francisco. The project “becomes almost a digital campfire that people can gather around,” he said.

“The Bay Lights” launches on the western span of the San Francisco Bay Bridge on March 5 and will run for the next two years.