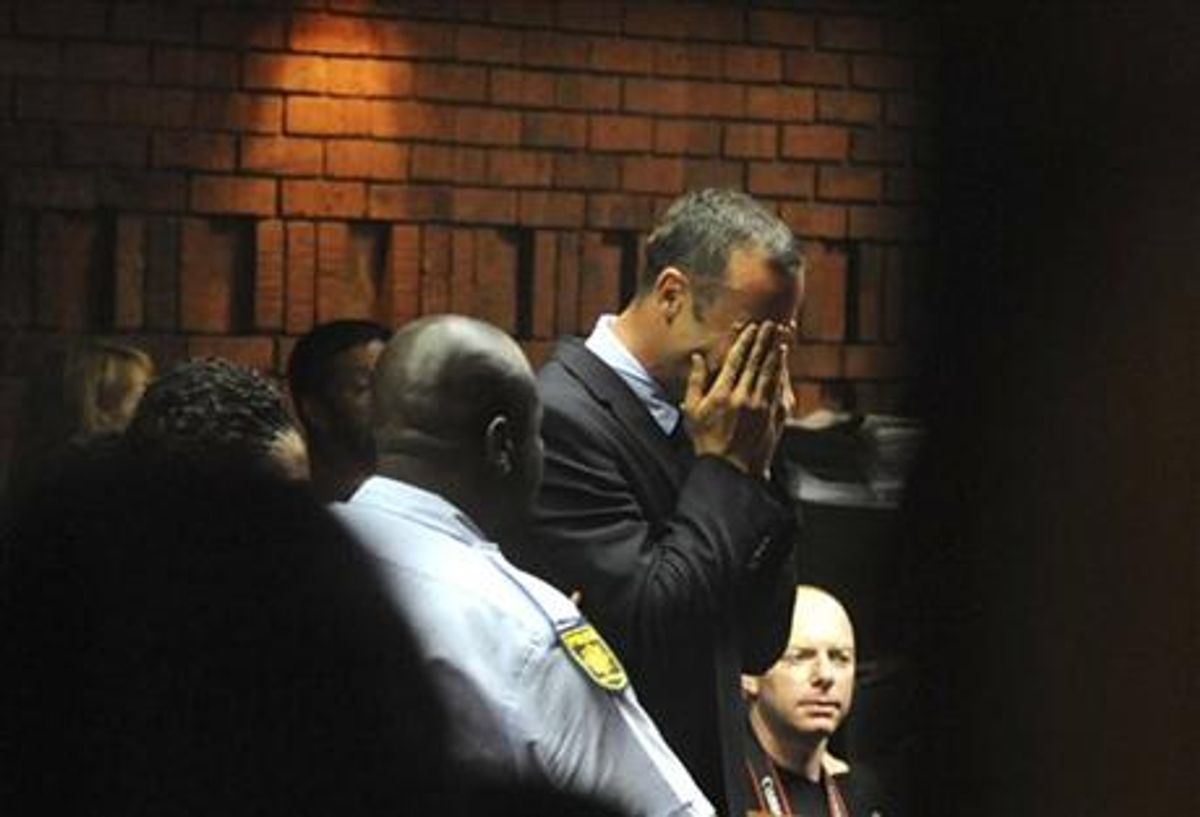 JOHANNESBURG (AP) — Oscar Pistorius' track career was put on hold indefinitely Sunday as his agent canceled all future races so the double-amputee Olympian can focus on defending himself against his murder charge.

After visiting Pistorius at the police station he is being held at, agent Peet van Zyl said in a statement there is "no option but to cancel all future races that Oscar Pistorius had been contracted to compete in to allow Oscar to concentrate on the upcoming legal proceedings."

Pistorius was arrested and charged with the Valentine's Day murder of model girlfriend Reeva Steenkamp, who was shot multiple times at Pistorius' upscale Pretoria home in the early hours of Thursday.

Pistorius has been held since Friday at the Brooklyn police station in the South African capital, where Van Zyl visited Sunday along with memebers of Pistorius' family and his legal team.

"The nature of my visit today was two-fold," Van Zyl said. "On a personal level I wanted to offer my support to Oscar, who I have known and worked with for the last seven years and consider a friend and a great professional athlete.

"Secondly, I wanted to briefly discuss racing matters, given that his key focus is defending himself against this serious charge."

Van Zyl said Pistorius' endorsements, including with big-name brands such as Nike and Oakley, were safe for now since sponsors have committed themselves to the South African, despite his murder charge. That could change, depending on the outcome of Pistorius' case.

"I can confirm that at this point in time all parties are supportive and their contractual commitments are maintained," Van Zyl said. "They have said they are happy to let the legal process take its course before making any change in their position."

On the track, Pistorius had finalized agreements for five races for the first half of 2013: two in Australia in March to start the South African's season, two exhibition runs against fellow Paralympic champions Alan Oliveira and Jonnie Peacock, and an appearance at the U.S. Drake Relays in Iowa.

Van Zyl's move to cancel those races was first reported by The Associated Press on Saturday.

All future races were now called off, Van Zyl said, including others that were still being discussed. Van Zyl said the decision is "to help and support all those involved as they try to come to terms with this very difficult and distressing situation."

Pistorius' famed track career, where he was the first amputee athlete to run at the world championships and at the Olympics, is now facing ruin ahead of a possible lengthy murder trial.

Prosecutors also have said they will pursue a more serious charge of premeditated murder against Pistorius for the killing of Steenkamp, meaning a conviction could result in a life sentence. His family denies he committed murder.

The 26-year-old Pistorius was expected to reappear in court on Tuesday for the start of his bail application hearing.

"On Oscar's behalf, we, as his management company, would like to formally thank the thousands of people who have sent supportive messages which have come from all over the world," Van Zyl said.