Badly hurt by climate change, the wolverine is now a strong candidate for the endangered species list 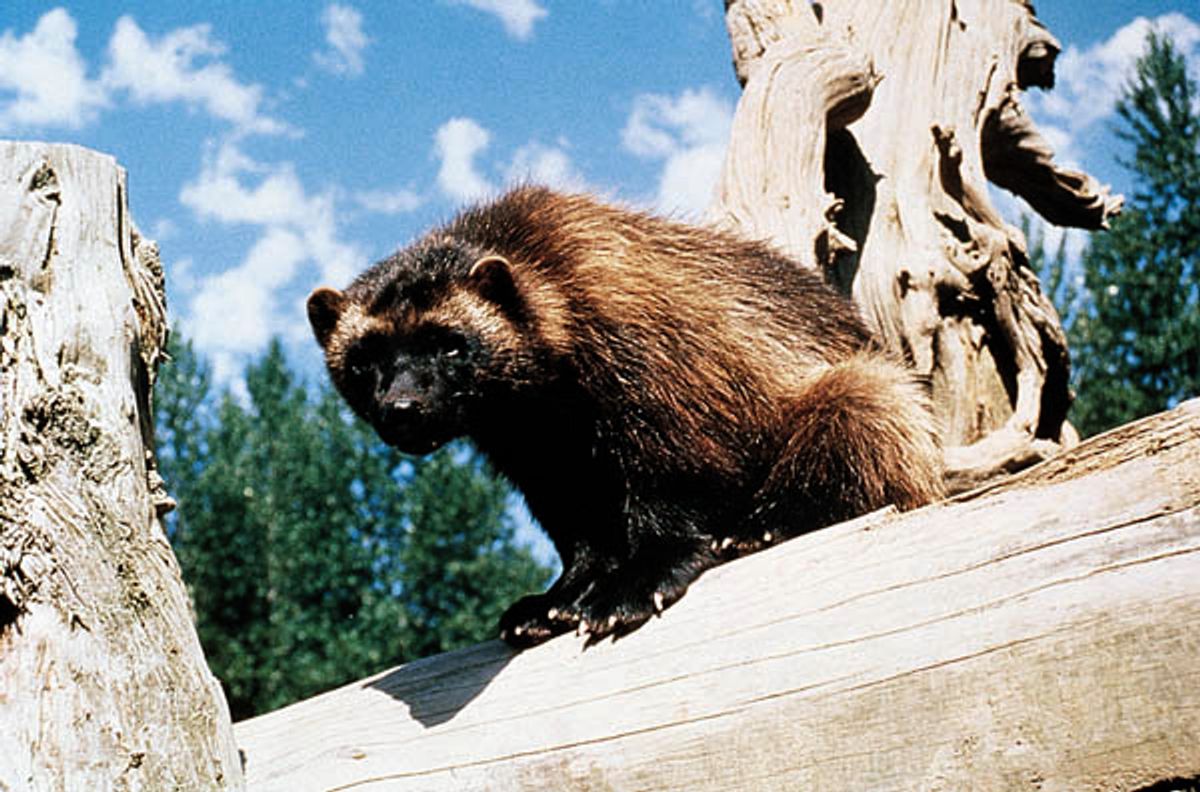 When 18th century zoologists gave the largest land-dwelling member of the weasel family the scientific name Gulo gulo -- which translates, not so roughly, to gluttonous glutton -- they were foreshadowing what would be mankind’s rather one-dimensional view of the creature we now know as the wolverine. The black-and-white, 30-pound, bushy-tailed scavenger has come to loom as a voracious, flesh-ripping hellion in our popular imagination -- largely, it seems, because we don’t know much about it.

“Weasels tend to be very intense. When a weasel gets something on its mind, almost nothing else matters,” says Jeff Copeland, a former U.S. Forest Service biologist and a founding director of The Wolverine Foundation. The animal, sometimes called a “skunk bear” because of its smell and shape, is fearless and determined in its pursuit of meat -- whether carrion in the winter or marmots in the summer. Copeland once GPS-tracked a wolverine that scaled the vertical face of Montana’s 5,000-foot-high Mount Cleveland in mid-January in 90 minutes, simply because the peak stood directly between it and a dead mountain goat. “We see things like that pretty often,” he says. “Just amazing feats of mountaineering.” Anecdotes also abound of wolverines attacking wolves and bears that get between them and a meal -- and though such stories are “largely nonsense,” Copeland says, wolverines can be aggressive when they’re threatened or hungry. “There’s nothing more impressive,” he says, than the “low, guttural rumbling” cry of a raging Gulo gulo.

Yet over the past several decades, researchers have begun to learn some surprising facts about wolverines that go beyond their famous insatiability. For one thing, they are utterly dependent on a single variable for survival. Wolverines typically live at Arctic and subarctic latitudes, though they also venture further south. At the warmer edges of their range, which tend to be more populous, they stick exclusively to high altitudes (in a recent study conducted in Central Idaho, they rarely ventured below 5,000 feet). Scientists long believed this was because they wanted to stay away from humans. Instead, it turns out that where they live is almost entirely determined by snowfall.

Wolverine females are picky about the dens in which they give birth and suckle their “kits,” and will only dig them in the snow. Though they use downed trees and rocks as scaffolding, they refuse to venture underground, as bears do. That means they can only live where there is deep, persistent snow as late as mid-May, when they wean their young -- a real-estate requirement that confines them to Canada, Scandinavia, Siberia, Alaska, and, in the Lower 48, the mountains of Washington, Montana, Idaho, Wyoming, and, historically, Colorado and California. It’s also a major reason the wolverine is currently a serious candidate for endangered species listing, nearly 20 years after conservation groups first petitioned the U.S. Fish and Wildlife service for their protection. Today, based on the latest data, the agency's biologists plan to issue a proposal that wolverines in the contiguous U.S. receive some Endangered Species Act protections. That data includes a 2011 study published in the journal Ecological Applications predicting that earlier snow melts caused by global warming will likely cause wolverine populations to “become smaller and more isolated” than they already are.

Exactly how small and isolated they are now is still hard to say. In the early 1900s, livestock owners and wildlife managers in many Western states began poisoning programs designed to kill animals that endangered cattle -- particularly wolves, coyotes, mountain lions, and sheep, which grazed in high-country wolverine habitat. Wolverines, along with other predators, devoured carcasses laced with strychnine and Compound 1080. They were also hunted and trapped for their fur. By 1930, trapping records and a lack of sightings by biologists suggested that wolverines were almost completely absent from the U.S.

Subsequent conservation efforts have allowed wolverines to recolonize many parts of their range, but it’s still unclear how many constitute a healthy population. Conservation biologists typically believe that for a given species to persist, it needs to contain at least 50 fertile females, Copeland says. But in Glacier National Park, which houses the densest population of wolverines in North America and possibly the world, there are only about 13 breeders, out of roughly 45 animals total. Because systematic counting is so difficult and expensive, biologists can only guess at the number of wolverines in the contiguous U.S.; Copeland gives 300 as a ballpark estimate.

There’s a good chance that for wolverines, those low densities are normal -- male wolverines stake territory claims of 500 square miles, within which two or three denning females may reside on their own 75 square-mile spreads. (A single male tends to co-opt multiple females, leaving a corresponding number of wolverine fellows to wander in celibacy, in search of territory holders they may be able to best in battle.) Though not quick or agile, wolverines are dogged and constantly on the move over wintery terrain, their flat feet acting as snowshoes. They also have an impressive sense of smell and can detect a fresh carcass miles away. Copeland has known wolverines to pursue a caribou, for instance, across dozens of miles, expending more calories than they stand to gain but unwilling to change their plans, often so intent on their goal that they forget to be mindful of larger predators.

Sheer stubbornness seems to be at least part of the reason that “wolverines are really the only carnivore that tries to make it through the winter” in the upper latitude, frigid “white expanse of not much” in which they live, says Kevin McKelvey, a U.S. Forest Service research ecologist who co-authored, along with Copeland and others, the 2011 climate change study. In tundra, caribou and wolves head south, Arctic foxes move toward the coast, bears hibernate, “but the wolverines just hang out,” he says. At the southern extent of their range, they stay in alpine environments, scavenging meat from their high-country neighbors, mountain goats and sheep, which are sometimes felled by avalanches. Kits are born in late February or early March, and males appear to make multiple visits to each of their mate’s dens, perhaps to mark their territory against transient males or even help with childcare. Once the kits are weaned, their parents appear to leave them behind, but GPS tracking has shown that juveniles sometimes reunite with their father and travel with him for days. Researchers aren’t sure why, but “they appear,” Copeland says, “to be a much more social animal than we expected.”

Because wolverines live at such low densities in habitats where they’re difficult to observe, scientists have struggled to gather enough data about them to make generalizations about their biology and behavior. And while they appear to be “moving back into places where we’ve wiped them out,” McKelvey says, they face new challenges in the form of climate change and our increasing desire to commandeer their secluded landscape for such recreational pursuits as heliskiing and snowmobiling. A study underway in Idaho now hopes to show whether or not those activities affect wolverine movements and denning. On the trail of a good meal, Gulo gulo may be fearless, but can it stand its ground against human encroachment and a warming world? At long last, it seems, we’re on track to find out.