Seedy side of the circus 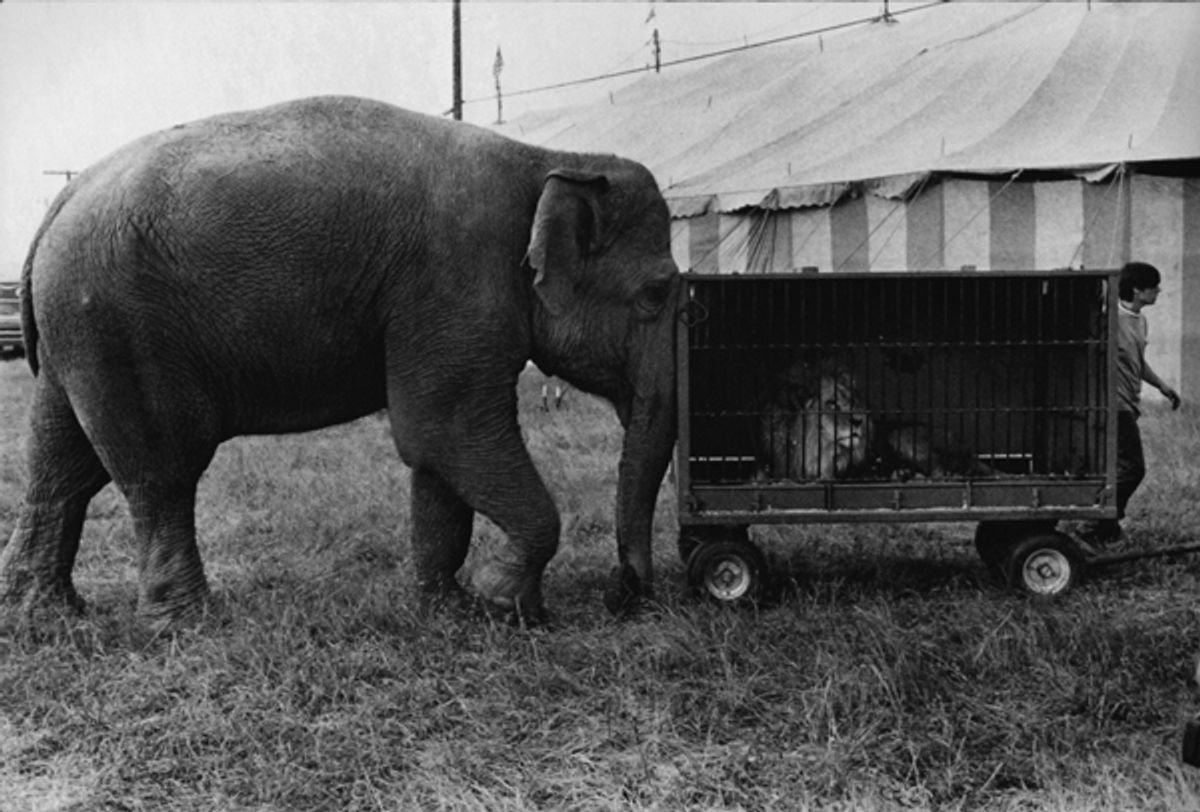 In documenting the rough corners of 1970s New York, Jill Freedman brought out with her photography something old-school lurid; like the flashbulb exposures of Weegee and Brassaï in the decades before, she always offered a startlingly and very human view on her street subjects. When in 1971 the photographer, then in her early 30s, borrowed a white Volkswagen bus to join the circus for two months, she turned her 35-mm camera on the claustrophobia of the caged animals and strange lives of the clowns and performers.

Back in 1977, she published these images in a book called Circus Days, and Higher Pictures gallery in New York is now showing over 20 of the photographs for the first time in New York in an exhibition of the same name. While you might expect art about the circus to be whimsical and amusing, walking around the gallery is totally unsettling. Elephants are pushed into trucks that barely contain their bulk, clowns apply their thick makeup smiles and frowns that, if you have even a touch of coulrophobia (the popular term for the fear of clowns) will creep you out. Freedman totally immersed herself in her travels with the Clyde Beatty-Cole Brothers Circus as they roamed the East Coast and pitched their striped tent in anonymous fields (no location is given for any of the photographs, the circus itself being the constant place). The personal connection she made with the people in the circus offered plenty of candid looks beyond the playful veneer of the circus into the tired faces and worn props that were resurrected each night under the big top.

Night after night, Freedman attended the circus performances, and some of her juxtapositions of the crowd with the main event are especially grim, like one in which a group of elephants are seated on chairs, likely compelled after years of harsh training, and in the foreground children also confined in wheelchairs watch. Subtlety is not the goal here, as one photograph goes in close to the chain around the elephant’s leg, and is installed next to another shot zoomed in on its surprisingly small and mournful eye surrounded by wrinkled flesh.

There’s also a built-in nostalgia, even if you’ve never attended a circus with a live lion and a tamer. Freedman wrote that:

The circus is a reminder of all those trips never taken, all those wild schemes gone cold in the sober morning. It’s a fragile fantasy, here today, gone tomorrow, free like we’re not. Free and nameless in a world full of bills and kids and credit cards that have got our numbers. The circus is an exuberant place, like childhood: a celebration of the joy of just being alive. It is a magic place, full of the mystery, terror, and ecstasy of childhood. It is grotesque and beautiful, strange and wondrous to behold. A place you feel more than you remember, where things imagined are as real as things happened…

The colors in the light filtering through the center poles, the pin and grommet holes, under the sidewalls. The sensual pleasure of a summer shower, wind and rain rapping the canvas over your head and you inside, warm and dry. Protected from the real world by a thin layer of magic. If we lose all of this, what will we have lost? And where will the free people go, when circus days, like the good old days, like the dreams you had, like the child you were, are gone.

Although she had a powerful eye in her documentary art, Freedman unfortunately dropped off the photography map in later decades due to health, finances, and personal feelings on the direction of contemporary photography. While New York is no longer like it was when in the 1970s and ’80s she photographed the camaraderie of cops taking on Alphabet City bar fights and other street violence, and firefighters battling the heat of flames and angry poverty in the south Bronx, the exhibition at Higher Pictures leaves you hoping she might someday again focus her camera to evoke the grimy, seedy side of its streets — or better yet, run away again to join the circus.