The five best sketches from a particularly odd week of news, from the Pope to the Carnival cruise disaster 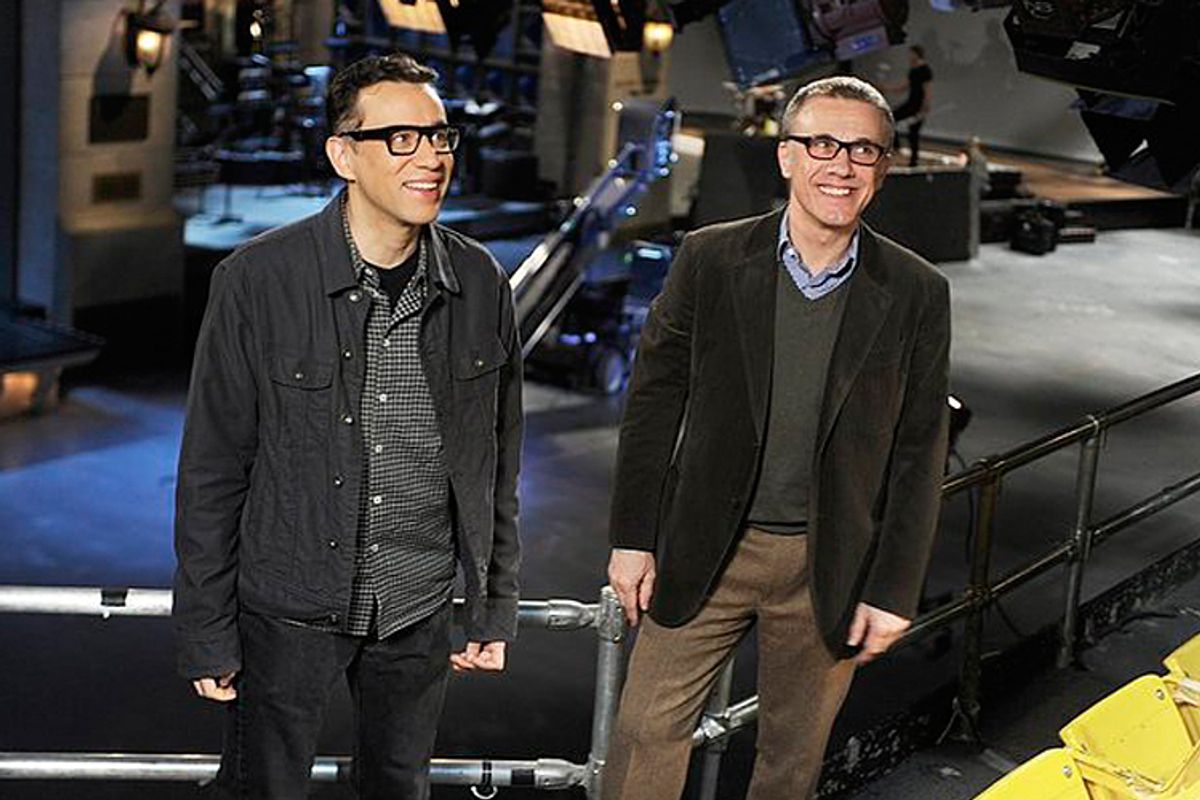 The wonderfully talented comic actor Christoph Waltz has Tarantino to thank for writing two versions of the same memorable role — Nazi Colonel Hans Landa in "Inglourious Basterds" and bounty hunter Dr. King Schultz in "Django Unchained" — both of which have earned him many awards, including an Oscar and a nomination for another, and "household name" status on this side of the Atlantic. If only "SNL's" writers could have gotten past their clichéd notions of Prussian humor — even as they made fun of their own limitations during Waltz's shrug-worthy monologue — and stopped forcing upon the poor actor one creepy, pervy, effete role after another then this could have been, well, if not great, than more fun, especially on this a bountiful week of insane news stories, each a gift bigger than the next: the first papal retirement since 1415, the State of the Union Address, the Carnival Cruise disaster, the horsemeat controversy in Europe, and the meteor that crashed into central Russia. I realize much of that newsiness responsibility falls to Seth Meyers on the ever-more-toothless "Weekend Update," but that sweet smile of his just looks sadder and sadder as it hangs in the air there like an abandoned high-five hand. (The man really does need an Amy.) Waltz gets Tarantino-like redemption when he puts on a crown of thorns, and gets resurrected as one seriously pissed off Jesus Christ.

Here are the five best sketches, in no particular order:

1. The Stranded Cruise Cold Open: The cold open imagines day four aboard the Carnival Cruise, now a ship-size bathroom, with panicked, angry — and verging-on-cannibalistic — travelers stuck at sea. The determinedly optimistic bedraggled duo of Jason Sudeikis and Cecily Strong work through an arsenal of cheer to defuse the anxiety with flattery (telling the doomed passengers how great they look for people who haven't bathed in four days), onboard entertainment (a bad Chris Rock knockoff, a horrible Michael Jackson imitation by the ship's delirious captain), and ill-advised up-to-the-minute news (which is one way to work through a laundry list of the week's happenings: sparing nothing, they hit all the notes, from North Korea to Reeva Steenkamp's alleged murder).

2. Retirement Ad: In this commercial, Waltz is Pope Benedict XVI preparing for post-Vatican, mortal life as Joseph Aloisius Ratzinger — holding the dubious honor of being the first policy holder of a papal retirement plan, since 1415.

4. Fox & Friends: Steve Doocy (Taran Killam), Gretchen Carlson (Vanessa Bayer) and Brian Kilmeade (Bobby Moynihan) reach out to their pal, gun-loving nut Ted Nugent (Bill Hader), about his response to the State of the Union. "Obama wants gun control, but really what we need to do is take the guns out of the hands of the crazy people, " says Nugent. Now watch him define crazy.

5. "Weekend Update" with special guest "Olya Potlavsky." Kate McKinnon's bizarrely hilarious Russian peasant, who lives in the Ural Mountains, is so miserable and desperate, that she's actually disappointed not to have been hit by the meteor. "Meteor, come to Olya, take me away from this barren wasteland," she begs, explaining to Seth that in her small village they recount to children the old legend of a hard-working girl who was rewarded by God for her devotion by turned to dust by a meteor. Dust that was then consumed by a goat. In whose guts the girl found warmth.