Confessions of a pot addict

After 13 years of daily use, I stopped smoking weed. But quitting only made me feel better about the drug 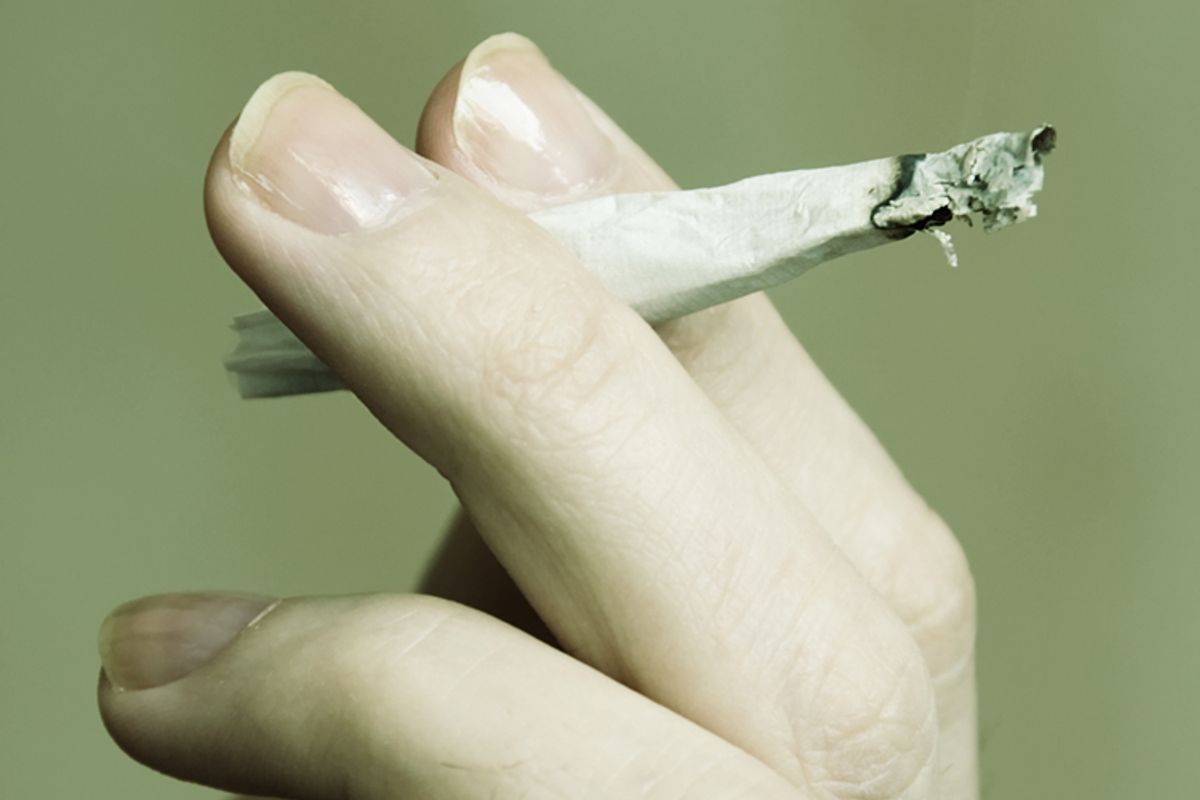 My relationship with pot started off badly. I lost all my high school friends after self-righteously refusing to smoke. I preached at everyone until our friendships evaporated. “I know if I try it, I will like it too much,” I remember saying — perhaps the only smart, true statement I would utter for many years to come.

The hardest friend to lose was a guy I’ll call Kevin. Kevin got me off Ratt and onto The Smiths. He got me playing guitar, which continues to provide me with happiness and social adventures at the age of 39. Without Kevin’s musical influence, I surely wouldn’t have moved from Florida to my beloved New Orleans after college. I worshipped Kevin until junior year, when he began smoking weed and abandoned me and my antidrug bitching. That same year, Kevin’s parents bought him a very nice car, which he crashed while skipping school and tripping on mushroom with his new drug buddies. At the time, I felt depressed but also extremely right.

When I finally broke down and tried pot in college at the age of 20, I realized I’d judged it totally wrong. Judgments regarding weed never prove factual, since the drug affects everyone differently. Some people plant themselves on the couch with snacks. Others grow manic and suffer panic attacks. I think of weed as a relaxant, a simple inverse of coffee -- and not just because I smoked every morning for a long, long time.

Weed never made me unproductive. In fact, it helped me work. I’d leave fun parties because, within moments of smoking, I had to rush home and produce something: record a song, write a story. If asked, doctors might claim I suffer from ADD, although I’ve mostly lived by the advice “never ask a barber if you need a haircut.” I did visit a counselor once in hopes of replacing weed with a nonsmokeable drug that my daughter couldn’t see me take and that wouldn’t get me arrested. I told the counselor we could skip all the talking if he could refer me to a psychiatrist with a prescription pad. First though, I told him how much weed helped me. He nodded, confidentially agreed, then gave me a number I never called. I feared pills would kill my libido and my desire to record music and write, whereas weed made me more horny and creative. So, no thanks, doc.

Most important, though, weed made me calm and nice. I grew up in a tumultuous, mildly violent Irish household, which burdened me with lifelong anger issues. Before becoming a real and true pothead, I fought ferociously with my long-term college girlfriend -- a fiery girl herself who was prone to throwing punches. Like my mother, I had trouble getting along with everyone. Unlike mom, though, I refused to ignore the common denominator: me.

So the discovery of pot was, for me, a mellowing godsend. Weed severely dampened my anger. My volatile girlfriend and I enjoyed more mindblowing sex while high. Also, once I officially gave in to a pot lifestyle, my brain slowed down by the perfect amount to let me, for the first time ever, sit and enjoy a book. I was even able to organize my thoughts enough to write a few books of my own.

Weed always provided outstanding musical companionship. Life never felt more perfect than when it was reduced to just me, pot and a four-track recorder. I remember wearing headphones and smoking a fat joint at the moment I received the phone call telling me I’d failed the drug test required to sell guitars at a Florida music store. That sounds ridiculous, but businesses whose employees pass drug tests get nice insurance breaks. “We all smoke here,” admitted the flustered guitar store manager. “How could you let this happen?”

Years later, I passed a drug test at New Orleans downtown public library with the aid of an orange drink called Vale, and then I began counting down six months of probationary days until the second test. Unfortunately, my library bosses loved me so much that, after five months, I arrived at work to news that they wanted to make my employment permanent immediately: “Just walk around the corner to the clinic and get the stupid drug test out of the way, and you’ll be ours forever!” announced my sweet old-lady boss. Despite first ducking into Walgreens and purchasing a tiny bottle of bleach to hide between my butt cheeks (I’d been told bleach confuses piss tests), I lost that job. It felt like being fired for drinking coffee.

Humiliated, sad and broke, I nonetheless refused to quit smoking, vowing to never again apply for a job that required drug testing. I’d also, by that point, realized I should never, ever try any “real” drugs (“I know if I try it, I will like it too much”). I have stood by both of those convictions ever since.

In 2005, my weed need was exacerbated by Hurricane Katrina. Lots of locals fared far worse than I, but watching everyone lose their homes and families poisoned even the unscathed with severe mental anguish. I began carrying a one-hitter pipe that I used every waking moment. As a busy freelance writer working from home, I took a pull off the metal cigarette roughly every half-hour until, by the end of the day, I had smoked the equivalent of a big joint (a bit more on band practice days).

New Orleans had previously boasted shitty and expensive weed. After Katrina, some entrepreneurial spirit realized this -- someone from Houston, we suspected -- and suddenly luscious, fragrant weed became available everywhere for $50 an eighth. For the next seven years, I spent roughly $200 a month -- not a ridiculous amount for what I considered to be successful mental health medicine.

I always made a point to speak honestly about my habit to medical doctors. At the end of any physical, after being told my lungs sounded pink, I derived perverse delight from admitting I smoked weed 20 times a day. My doctors never showed surprise and never gave me any real warnings, which I took to be further proof of pot’s innate harmlessness.

I never tried to quit, but whenever I ran out, it would only be a matter of hours before I’d end up in a loud argument with my girlfriend-now-wife or with an editor or with whoever else had previously pissed me off but had eluded my wrath when I’d been too stoned to care. “Jesus, go buy some weed!” my wife would shout back at me. And, unhappy with the angry intensity of my “real” personality, I did as instructed.

The birth of our daughter in 2009 did nothing to curb my use -- not even when the baby would find and bring to me my dirty one-hitter, announcing, “This is yours!” Once, she got hold of a paperclip gooey with resin (which I’d used to unclog a pipe) and ruined her very cute pink onesie. But I just couldn’t bear the possibility she might ever hear me shout like an angry maniac. Stoned, funny daddy did nothing but right by the little girl.

Finally, this holiday season, my wife planned a 10-day trip for us to visit her family in DC, which meant 10 days without medicine. The idea intimidated me, but for the first time, I looked forward to a break -- my longest in maybe seven years.

Real weed withdrawal occurs only in serious potheads, who are so used to feeling mellow and content that neutrality prickles. Vacation preparation consisted of reading up on what to expect: irritability, loss of appetite, insomnia. That first week up north did indeed feel like the “Basketball Diaries.” Not really. But my brain burned for five sleepless nights and days and, had we not been in her parents’ house, my wife and I would have argued constantly -- that need to fake sanity proved a blessing.

Then, on the fifth day, I began to calm. By the eighth day, the monkey vanished, and I haven’t seen him since.

During the following month of sobriety, I’ve turned down weed a dozen times, sans temptation. Which says a lot for pot. To put it in perspective: I also love milk, and upon the birth of my daughter, I ceased buying cow’s milk, wary of its corporate hormones. But soy never satisfied my intense lactose craving, and I caved within six months. Even though I’m not a big boozer, after Mardi Gras every year I abstain from alcohol for only 30 days (a sort of agnostic Lent) because the prescribed 40 is just too long. And two weeks after Fat Tuesday, I simply must gulp down one big glass of red wine to get me through the final two weeks.

But after 13 years of heavy daily marijuana usage I, miraculously, do not crave it at all. Which leads me to believe even more strongly that pot is as harmless as coffee. I simply abused it. It was me. Had I eaten as much peanut butter as I smoked weed all those years, I might have died of peanut butter overdose.

I can’t deny feeling smarter and more productive now. I wrote and published four books while high, but I might’ve written eight sober. By now, my brain feels permanently baked to perform at a slower, more comfortable speed, and I feel nowhere near as insane as I expected. I feel in better control of my emotions than at any other time in my life.

Or maybe I just feel temporarily good right now, having grown tired of a wonderful thing. I similarly love snorkeling, exploring the psychedelic depths and strange, colorful creatures therein. But if I could somehow stay under the beautiful water for 13 years, I imagine my eventual time back on land would feel fresh and interesting and that I could gladly avoid the ocean for a long, long time.

M. Welch is a New Orleans author and journalist. His work has appeared at Newsweek, Oxford American, McSweeney's, Vice and many other publications.