In an amazing 1939 essay, he argues against "receiving seed" with the intention of letting it "run to waste" 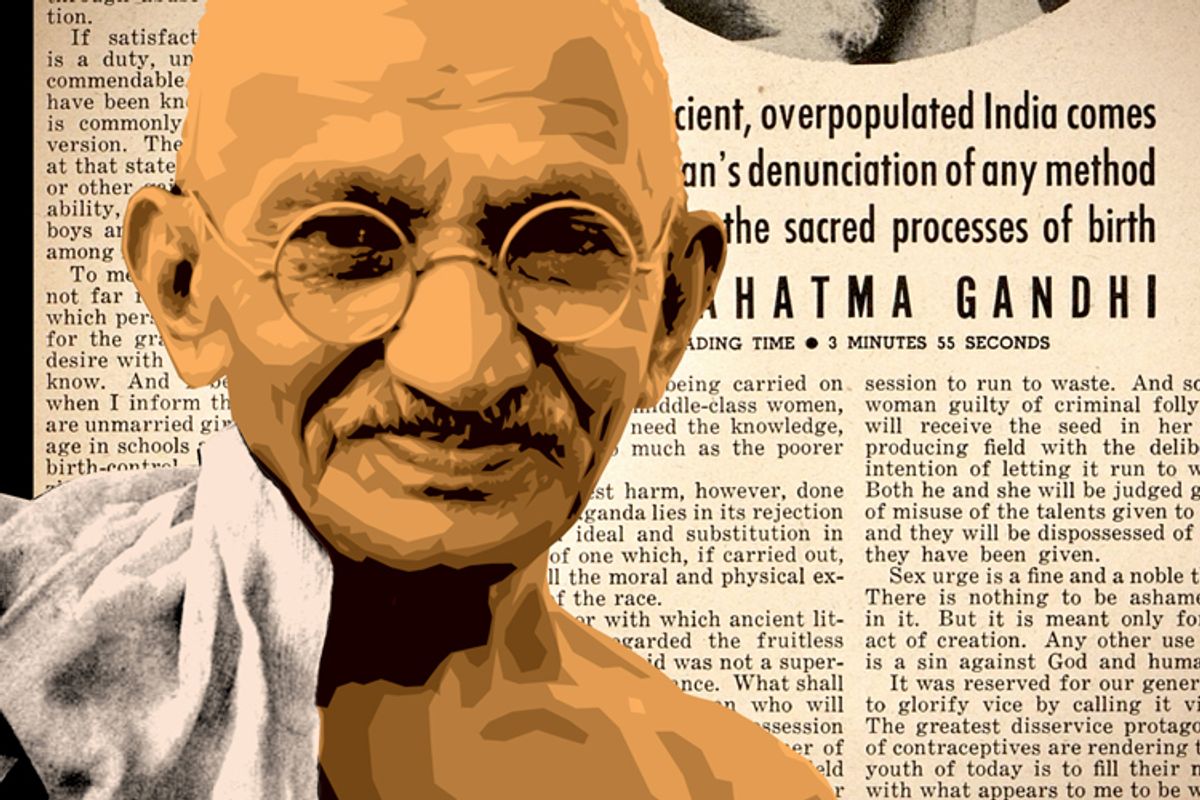 Excerpted from "My Sex Life, And Other Thoughts on Sex, Love and Temptations." Read Margaret Sanger's response here.

It is the fashion in some quarters nowadays for the young to discredit whatever may be said by old people. I am not prepared to say that there is absolutely no justification for this belief. But I warn the youth of all the countries against always discounting whatever old men or women may say for the mere fact that it is said by such persons.

I want to discuss the subject of birth control by contraceptives. It is dinned into one’s ears that gratification of the sex urge is a solemn obligation, like the obligation of discharging debts lawfully incurred, and that not to do so would involve the penalty of intellectual decay. This sex urge has been isolated from the desire for progeny, and it is said by protagonists of the use of contraceptives that conception is an accident to be prevented except when the parties desire to have children.

I venture to suggest that this is a most dangerous doctrine to preach anywhere, much more so in a country like India, where the middle-class male population has become imbecile through abuse of the creative function.

If satisfaction of the sex urge is a duty, unnatural vice would be commendable. Even persons of note have been known to approve of what is commonly known as sexual perversion. The reader may be shocked at that statement. But if it somehow or other gains the stamp of respectability, it will be the rage among boys and girls to satisfy their urge among members of their own sex.

To me the use of contraceptives is not far removed from the means to which persons have hitherto resorted for the gratification of their sexual desire with the results that very few know. And I betray no confidence when I inform the reader that there are unmarried girls of impressionable age in schools and colleges who study birth-control literature and magazines with avidity and even possess contraceptives.

It is impossible to confine their use to married women.

Marriage loses its sanctity when its purpose and highest use is conceived to be the satisfaction of the animal passion without contemplating the natural result of such satisfaction. I have no doubt that those learned men and women who are carrying on propaganda with missionary zeal in favor of their use of contraceptives are doing irreparable harm to the youth of the world under the false belief that they will be thereby the poor women who may be obliged to bear children against their will. Those who need not limit their children will not be easily reached by them.

Our poor Indian women have not the knowledge or training that the women of the West have. Surely the propaganda is not being carried on in behalf of the middle-class women, for they do not need the knowledge, at any rate, so much as the poorer classes do.

The greatest harm, however, done by the propaganda lies in its rejection of the old ideal and substitution in its place of one which, if carried out, must spell the moral and physical extinction of the race.

The horror with which ancient literature has regarded the fruitless use of the vital fluid was not a superstition born of ignorance. What shall we say of a husbandman who will sow the finest seed in his possession on a stony ground, or of the owner of a field who will receive in his field rich with fine soil good seed under conditions that will make it impossible for it to grow?

God has blessed man with seed that has the highest potency and women with a field richer than the richest earth to be found anywhere on this globe. Surely it is criminal folly for man to allow his most precious possession to run to waste. And so is a woman guilty of criminal folly who will receive the seed in her life-producing field with the deliberate intention of letting it run to waste. Both he and she will be judged guilty of misuse of the talents given to them and they will be dispossessed of what they have been given.

Sex urge is a fine and noble thing. There is nothing to be ashamed of in it. But it is meant only for the act of creation. Any other use of it is a sin against God and humanity.

It was reserved for our generation to glorify vice by calling it virtue. The greatest disservice protagonists of contraceptives are rendering to the youth of today is to fill their minds with what appears to me to be wrong ideology.

Let the young men and women who hold their destiny in their hands beware of this false god and guard the treasure with which God has blessed them and use it, if they wish, for the only purpose for which it is intended.

Excerpted from "My Sex Life, And Other Thoughts on Sex, Love and Temptations," available in the Liberty magazine digital archive and as a Kindle e-book. Reprinted with the permission of the publisher and Madwell.