As conservative as his politics were, he did encourage the Church to renew its relationship with the art world 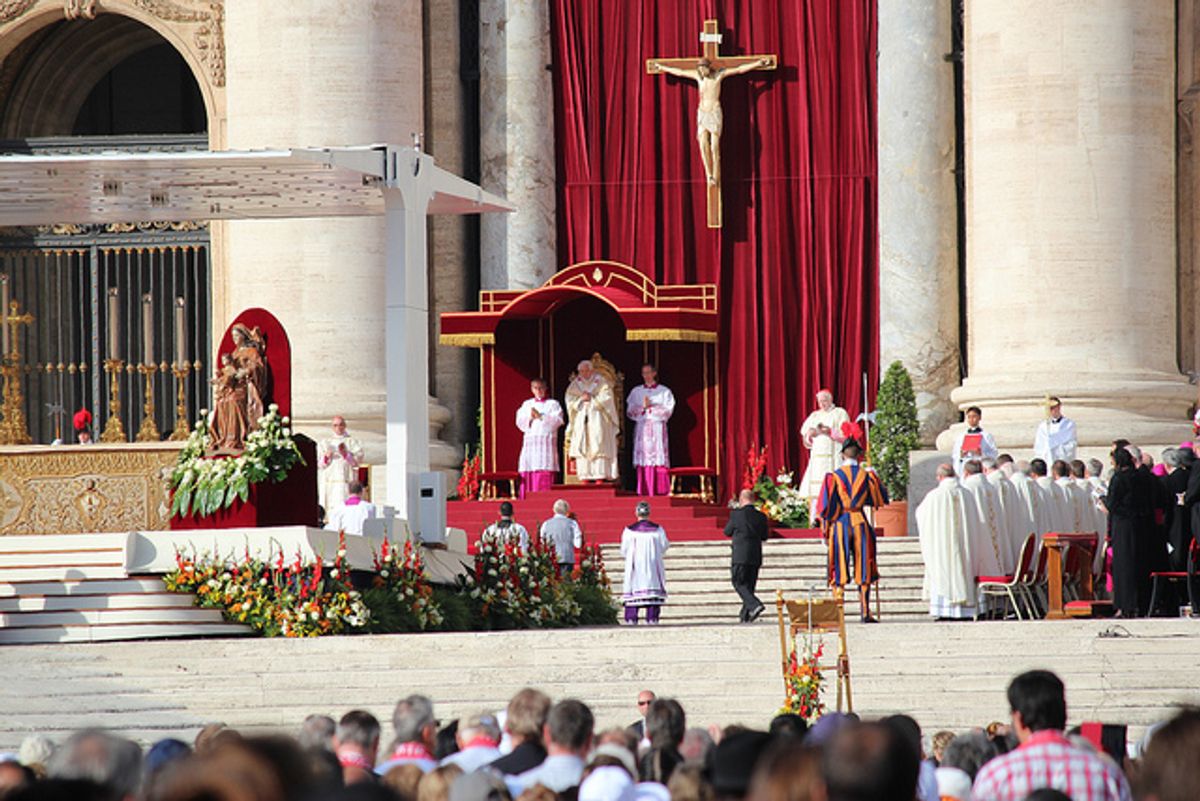 As the first Catholic Pope to resign from his position since Gregory XII in the 15th century, Pope Benedict XVI has startled the world with his announcement that he will step down by the end of this month. While controversially conservative (and much less benevolent-appearing than his predecessor the grandfatherly Pope John Paul II), the German-born religious leader did have an open mind at least in encouraging a renewed relationship between the Catholic Church and art, viewing the use of beauty as a path to the sacred.

Named the Pope in 2005, he oversaw the 500th anniversary of the forming of the Vatican Museums by Pope Julius II, including a gathering of hundreds of “Patrons of the Arts” in the Catholic Church, as well as the permanent opening to visitors of a necropolis some 2,000 years old filled with ornate mausoleums. As the head of Vatican City and its immense Vatican Museums, the Pope casts influence not just over the Catholic Church, but the presentation of the history of art as well.

Back in 2009, the Pope met with a group of 250 people, primarily artists along with architects, writers, and musicians including Zaha Hadid, Ennio Morricone, Anish Kapoor, Liliana Cavani, Kengiro Azuma, and Paolo Portoghesi, for a meeting on art in the Sistine Chapel “to express and renew the Church’s friendship with the world of art” and “to convey to all artists [his] invitation to friendship, dialogue and cooperation” as he said in his address at the gathering. Held a decade after his predecessor Pope John Paul II’s Letter to Artists, he proclaimed (enthusiastic exclamation marks included from the Vatican’s records):

You are the custodians of beauty: thanks to your talent, you have the opportunity to speak to the heart of humanity, to touch individual and collective sensibilities, to call forth dreams and hopes, to broaden the horizons of knowledge and of human engagement. Be grateful, then, for the gifts you have received and be fully conscious of your great responsibility to communicate beauty, to communicate in and through beauty! Through your art, you yourselves are to be heralds and witnesses of hope for humanity! And do not be afraid to approach the first and last source of beauty, to enter into dialogue with believers, with those who, like yourselves, consider that they are pilgrims in this world and in history towards infinite Beauty! Faith takes nothing away from your genius or your art: on the contrary, it exalts them and nourishes them, it encourages them to cross the threshold and to contemplate with fascination and emotion the ultimate and definitive goal, the sun that does not set, the sun that illumines this present moment and makes it beautiful.

The outreach aimed to return a dialogue between the church and art, one that was formerly strong with the leading artists of the Byzantine through the Renaissance creating their best work under the church’s patronage, and to prod contemporary artists to perhaps focus a bit more on spirituality. Also in 2009, following the massive artist gathering, the Second Fota International Liturgy Conference had the theme of “Benedict XVI on Church Art and Architecture” to look at ways to involve the beauty of art in liturgy. Back in 2011, he reaffirmed in a general weekly address that “art is like an open doorway to the infinite, toward a beauty and truth that go beyond everyday reality.” The call to involve the arts by Pope Benedict XVI inspired leaders in the Catholic Church around the world to give it an extra focus, such as the Manila Archbishop Luis Antonio Cardinal Tagle who led a Patron of the Arts benefit concert last month, and Benedict was public in praising artists outside of the realm of the church, like Jewish artist Marc Chagall. The surreal-toned German realist and athiest Michael Triegel was named to paint the Pope’s portrait for the Institut Papst Benedikt XVI in Regensburg, with the Pope declaring him his “Raphael.” For his official portrait, though, the classically-trained, but quirky (she keeps a pet owl), Russian artist Natalia Tsarkova was selected for a rich hued work. For the 60th anniversary of his being ordained a priest, the exhibition The Splendor of Truth, the Beauty of Charity was organized in 2011 and including a work for each of his 60 years, and not the cleanly divine art you might expect, with contributions by Max Cole and El Anatsui. Although he will no longer be Pope when it opens this year, the Holy See also finally became part of the Venice Biennale under his watch, with contemporary artists expected to focus on the Book of Genesis. (They had originally planned to make their debut at the 2011 Biennale, but that was canceled due to slow bureaucracy that, according to the Vatican, “would have risked presenting something that wasn’t of a very high standard.”)

Usually the process of naming a new Pope disrupts the usual visits to the Vatican Museums, as the secretive meetings ordinarily convene beneath Michaelangelo’s murals in the Sistine Chapel, although it has not yet been confirmed if and when that will be the case. With the outgoing of Pope Benedict XVI, there’s certainly hope that someone more liberal might take his place to get the Catholic Church back on track for forward thinking that was slowed down by this Pope, although whether or not they can find someone equally enthusiastic about the beauty of art may be even harder.