Thank you for being a friend, Hannah Horvath

Why is TV so enamored of the "Golden Girls" archetypal quartet to explore female friendship? 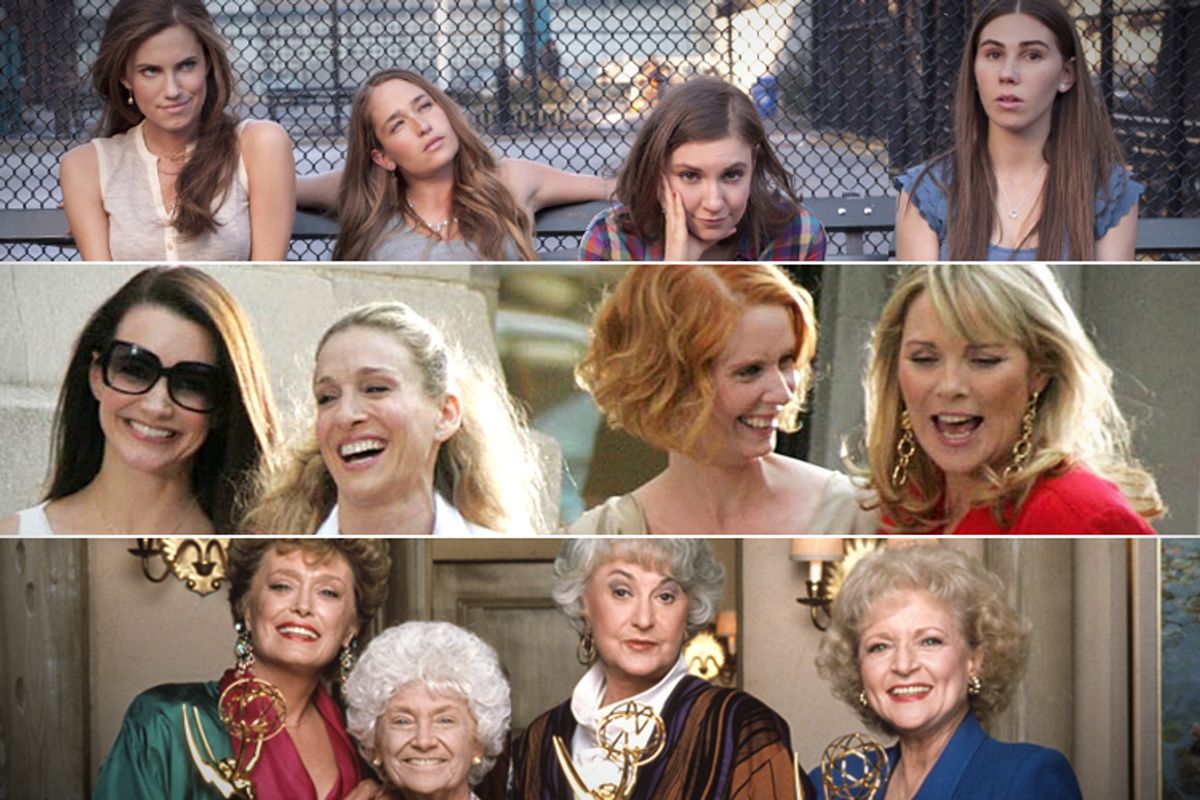 The volumes' worth of cultural criticism penned about “Girls” agree only that the show is polarizing, provocative and, above all, unconventional. But now midway through its sophomore season, “Girls” has settled into a dynamic with its four central characters that’s surprisingly traditional: There’s the sweet/ditzy girl, the free-spirited/sexual girl, the uptight/sarcastic girl, and the protagonist who acts as the linchpin, holding all these opposing personalities together.

Any show that’s set in New York City and follows the lives of four women will inevitably come up against “Sex and the City” — a comparison “Girls” blunted in its pilot episode by making its least savvy character (Shoshanna, totally a Charlotte) a gushing fan of "SATC." But “Sex and the City” didn’t set the archetypes so much as it cemented them. Before women selected their fictional counterpart in Carrie/Samantha/Charlotte or Miranda, they had already assigned themselves to a Golden Girl. I’d argue that all television foursomes are actually walking in the sensible shoes of Rose/Sophia/Blanche and Dorothy, although variations on the rule-of-four dynamic has played out in other shows and films like “Mean Girls,” “Pretty Little Liars,” “The Sisterhood of the Traveling Pants,” “Heathers,” “Bachelorette” and, on the other end of the gender spectrum, “Entourage” and the mixed-gender roommates on “New Girl.”

Presumably, foursomes are such a common grouping in popular culture for the same reasons the number works well in real life. Four is a nice round number, intimate enough for each member to play a distinctive and vital role. A foursome fit perfectly around a coffee shop table, or on a Greenpoint stoop (or a sun-drenched lanai, for that matter). They allow for a variety of interactions and shifting allegiances, and avoid the odd-man-out headaches endemic to threesomes.

I’ve always had an affinity for quartets in pop culture — probably because I’ve been a member of such a group since high school and we’ve spent a lot of time over the years matching ourselves to members of fictional foursomes. There’s a natural desire to assign specific labels to members of a group (she’s the basket case, she’s the together one, etc.); they become a kind of shorthand for understanding motivations and how a person will react to a given situation. The inherent conflicts in putting an innocent, a cynic, an uninhibited free spirit and a well-grounded protagonist together is a recipe for instant comedy — but of course real women don’t fit so neatly into these categories.

Both “The Golden Girls” and “Sex and the City” are based on the premise that female friendship is the closest, most vital bond in life. Boyfriends, adult children and grandchildren made fleeting appearances in Blanche, Rose, Dorothy and Sophia’s pastel-hued Miami home, but the roommate relationship was the central one in each of the women’s lives. As much as “Sex and the City” focused on sex and dating, the ethos of the show was summed up when Charlotte told the group: “Maybe we can be each other's soul mates, and then we can let men be just these great, nice guys to have fun with.” It’s not such a stretch to imagine that a couple of decades down the line, after everyone is divorced or widowed and traversing New York City streets in four-inch heels is getting burdensome, that Carrie, Samantha, Charlotte and Miranda might retire together, embrace shoulder pads, and become their Florida-dwelling emotional doppelgangers.

With “Girls,” Lena Dunham has given us the 20-something version of this dynamic in uptight Marnie, sexually liberated Jessa, bubbly Shoshanna and insecure Hannah. However, unlike its predecessors, the show addresses how this quartet of divergent personalities could become, and remain, friends. The central characters on “Girls” are less the close sisterhood of “The Golden Girls” or the women from "SATC," and more a loose affiliation. Hannah is the connector between her college chums Marnie and Jessa, and Shoshanna is related to Jessa — which is realistically the only way that these four young women would ever all hang out together. It’s also an authentic depiction of how women in their 20s approach friendships: a blend of ever-shifting loyalties, neediness and selfishness.

The most critical relationship on the show is the one between Hannah and Marnie. The first season tracked their evolution from best friends and roommates who share a bed and rock out to Robyn together to their current, fractured relationship. It’s entirely believable that practical Marnie would start to drift away from her more aimless friends after they’ve all left the college bubble and started finding their way in the real world. The fight between Hannah and Marnie at the end of Season 1, which culminates in the two of them flinging toothbrushes at each other and screaming, “You are the wound!” is a raw, beautifully executed exchange. Like most young women at their stage of life, Hannah and Marnie are in the process of finding themselves, and perhaps haven’t learned the value these friendships will hold as they move into later, less dramatic stages of their lives.

“Girls” also diverges from familiar tropes with its protagonist, Hannah Horvath. Dunham refuses to play the familiar role of the self-aware, wisecracking heroine à la Carrie Bradshaw or Dorothy Zbornak. Instead, in the second season she has become a full-blown monster of comic self-absorption. “I don’t need to play by the rules anymore,” she declares on a night when she has convinced her neighbor, an addict in recovery, to score her cocaine and marched around Brooklyn in a see-through mesh top. On the other hand, the other two members of the quartet are significantly less complex. Shoshanna has gotten some welcome character development this season thanks to her deepening relationship with Ray, but remains for the most part a sweet innocent. Jessa has always seemed to me the least dimensional of the girls — even in the midst of the brutal end of her short marriage she never loses her free-wheeling bohemian swagger.

An essential part of being in your 20s is the very real sense that every emotion, experience and struggle is happening for the very first time. (I remember reading Joan Didion’s gorgeous essay "Goodbye to All That" for the first time in my mid-20s and being genuinely surprised to learn that quarter-life crises existed in the 1960s.) It’s a hallmark of youth to believe that you’re breaking entirely new ground while, in actuality, walking a road forged by those who’ve come before. “Girls” displays a refreshing boldness and a willingness to explore the characters’ ugly sides and internal messiness. But despite the show’s experimental leanings (and the ongoing controversies over nudity and lack of diversity), the girls on “Girls” don’t stray too far from type.

Meghan Lewit is a writer and editor based in Brooklyn. She has contributed to The Atlantic.com, The Awl, Zocalo Public Square, L.A. Weekly and others. Follow her on Twitter @Meg_Lewit.