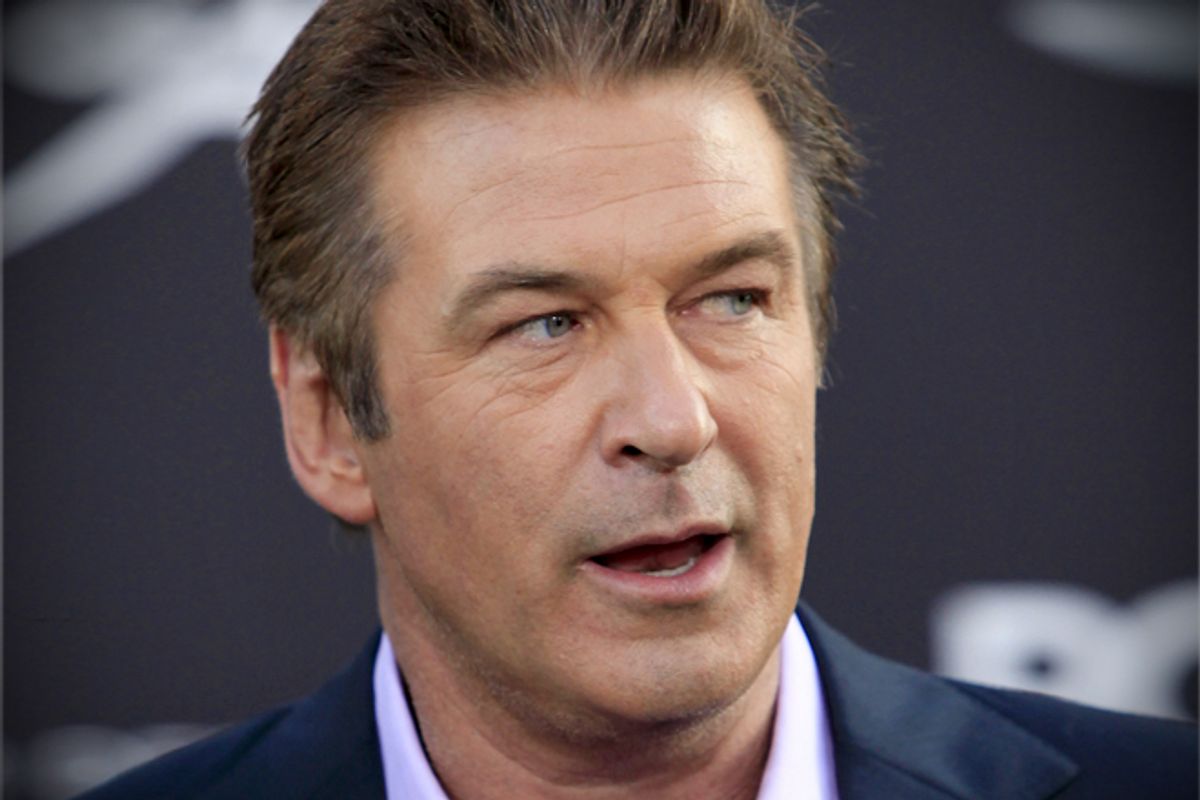 Another day, another face-off between Alec Baldwin and the New York Post, it seems.  Reports Ben Yakas of The Gothamist, the "30 Rock" star got into another altercation with the tabloid on Sunday. Baldwin told the New York City blog that a New York Post photographer assaulted him near his East Village apartment, and that he called the cops to file a formal complaint against him. But photographer G.N. Miller, who is black, went on counterattack, accusing Baldwin of calling him a "crackhead,"  a "drug dealer," and "a coon."

Baldwin told Yakas, "If you want to paint a picture of me that is a denigrating picture, I've seen that. If you want to put words in my mouth...I've certainly had my moments. But this is not one of them. I don't think I've ever uttered a racial epithet to someone in my lifetime."

The actor suspects the photographer — an ex-cop with the NYPD — was after him because of a recent lawsuit against his wife, Hilaria Thomas, a yoga instructor. "This guy was right up in my face as I crossed University Place," he told Yakas, claiming the photographer was being particularly aggressive. "I get to the other side of the street, and he bumped into me. He banged into me with his shoulder, because he was right on top of me with the camera. I've had that happen before. It happens sometimes, because they want to bait you, they want you to do something."

This is hardly the first altercation with local tabloid photographers. Baldwin said that around his wedding last summer to Hilaria, a photographer tripped and sat on a baby in a stroller attempting to snap his photo. "My wife is pregnant and I'm trying to make sure she has as much peace as possible," he said.

Baldwin said that the cops who took his complaint were kind and professional and quickly responsive. And, of course, the prolific tweeter took to Twitter to document the experience — and The Gothamist tweeted back to him, offering to report his side of the story.

The photographer says he told Baldwin he was a former cop and furnished his ID, which Baldwin believed was fake.  Baldwin tweeted, "My publicist has informed me that the "photographer" from the Post is claiming I called him a racial epithet, prior to me contacting NYPD."

The New York Post claims that Baldwin tweeted, "Moments after I tweet about the Post, Ralston [Baldwin inexplicably renamed Miller, "Ralston"], the ex-crackhead ‘photographer’ shows up at my door w 1 of Murdoch’s nieces in tow,” and "Ralston claims he’s ex NYPD!! That can’t be!!! Ex NYPD don’t become crackhead, ex jailhouse paparazzi!” — tweets he later removed, according to the tab.

But as the Gothamist reports, Baldwin said, "When they were there, no one made any mention of anything. While police were here, you'd figure that'd be an opportune time for this guy to really attempt to tar me in some way. But there was no mention of anything I said to him, no one said anything about me saying the N-word or taunting him or anything. So it was after the fact. He wants to say I used some racial slur against him."

In another tweet, Baldwin wrote, "Why did the photographer make no mention of this when the cops showed up? Cops make rather good witnesses." The Gothamist is awaiting a comment from the Post about the confrontation — the tab has yet to respond.

Baldwin told the Gothamist, "The Post will stop at nothing — that's what the Post is. Their function is to denigrate people, humiliate people, reduce people, make excuses for people who are their political partisans. It's a highly biased, highly politicized group of people. However, I'm stunned that they would resort to that. Even for the Post, this is a new low."