Coming out to my wife

When I told her I was bisexual, and fooling around with men, I knew our marriage was doomed. Instead, it opened up 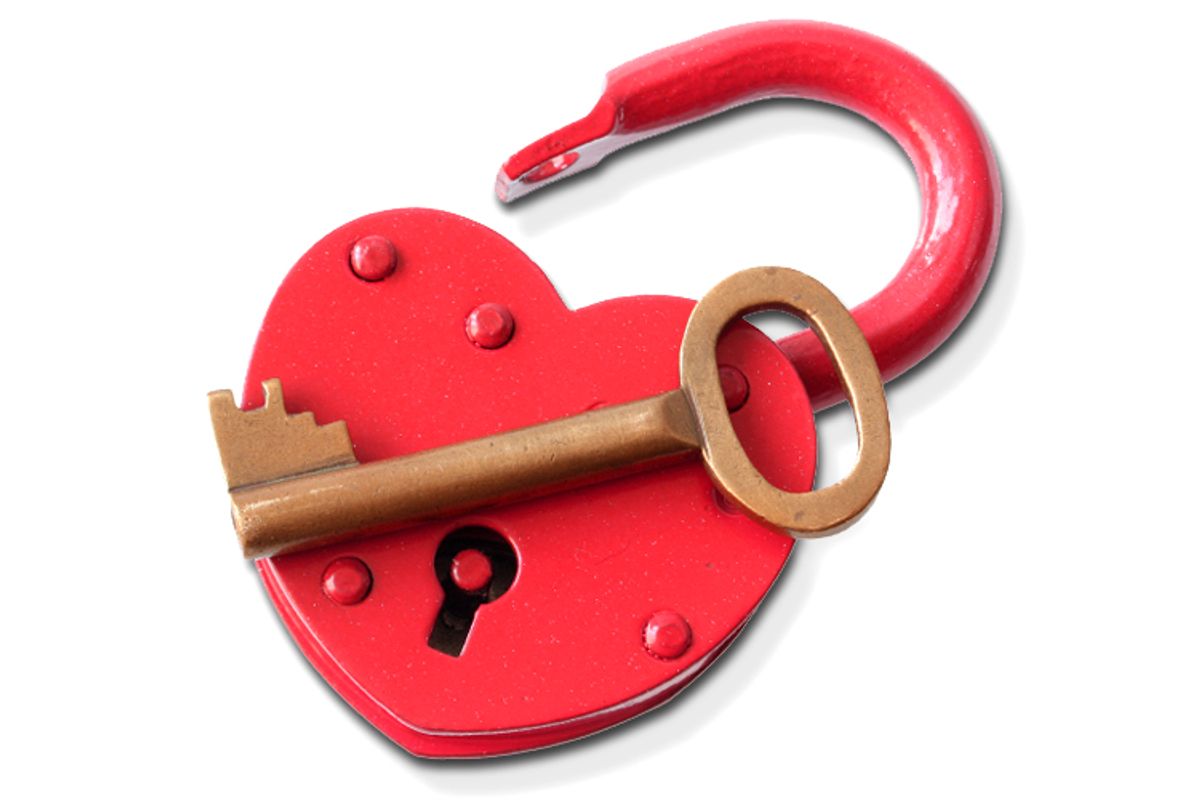 After 15 years of marriage, I drove my wife up to a local mountain, parked on the side of the road, and came clean: I'd been fooling around with men behind her back, and after a lifetime of grappling with my sexuality, had come to accept the fact that I am bisexual.

"Our marriage is over,” I told her. “At the very least it's over in the way it used to be – which is a good thing, because I'm not very happy, and I don't think you are either."

The experimentation had gone on for a couple of years. I’d had relations with half a dozen or so guys (always safe). I had quickly discovered the lively, burgeoning world of secretly bisexual married men – most of whom are in their 40s when they get enough courage to step out. My gay father had always told me how many married guys he'd meet at the bars – and now, I was one of them. When I made the decision to sleep with a guy behind my wife's back, I also decided I’d never tell a living soul about it. Ever. Of this I was certain.

But there I was, spilling everything to her. I thought it would be the end of us. Instead, it was a whole new beginning.

Like many bisexual men, mine has been a life-long process of self-acceptance. The first person to get me off, other than my own right hand, was my best guy friend at the age of 13. I would've given anything for that title to go to Leah Cole, but neither Leah nor any of the girls I knew were into sex. Stuart was, though. Did that make me bi, or just desperate?

My overwhelming preference has always been for women, but I've often sought out the company of men. I used to tell myself it was because I didn’t have a woman at the time. But that wasn't entirely true. But I chalked those adventures off to caprice.

I was 31 when I met my wife. I'd been living in a state of self-imposed celibacy for a year by the time we became intimate. I was fed up with dating and the emotional drain of meeting an endless stream of women, and we stayed work friends for six months until we realized we were attracted to each other. We got married a few months later. She was pregnant with our son by our first anniversary, and with our daughter for our second.

We were a good team, but years of diapers, weekends spent at kids' sporting events, and slave to the daily grind -- shopping, cooking, cleaning – can’t help but build debris between two people. Our time together was usually fraught with disagreement and bickering. I remember the first Friday night my wife and I had alone. Both kids had stormed out before dinner: They'd be sleeping at a friend's and would call us in the morning. The two of us stood in the clean, empty kitchen looking at each other as if for the first time in years. This was the future, and it looked bleak.

It was 13 years into our marriage, in my mid-40s, when I started hankering for some man-to-man contact. It surprised me. I hadn’t felt that way since my 20s. I plunged into the anxious self-questioning that used to accompany these desires: Why do I feel this way? Am I gay? Am I angry at my wife? Am I just frustrated with the lack of sex in our marriage? Do I think having a fling with a guy isn't adultery?

For two years I lived in denial, rationalizing away my actions. And then, one afternoon, after a brief encounter with a guy, it hit me: I'm living in a monogamous, heterosexual relationship, when in fact, I'm neither.

I was 47, and I was no longer able to deny the fact that I wanted – needed – to be with men as well as women. In the days leading up to telling my wife, I knew I had to prepare for the worst. She could leave me, become vindictive, try to take away the children. The fact that I went through with it despite these fears was a testament to my unhappiness.

In her book "Opening Up," Tristan Taormino writes that in relationships where bisexual men come out to their spouses, one-third split up immediately, one-third split up within two years of the admission, and of the other third who stay together longer than that, very little is known. Lucky for us, we were the latter group.

Yes, there was anger, hurt, disappointment and distrust after my confession. My wife was most upset by the broken trust. She could understand my desire to sleep with guys and had no problem with it. She did have a very hard time accepting that I had lied to her.

The fact that I had not slept with other women had made a big difference in the way she reacted. I'm not at all certain we would have made it through had I done that.

It took my wife four days to come to terms with what had happened. On the morning of the fifth day, she left her depression in bed and joined me for breakfast, telling me that she was ready to talk.

We went out for dinner that night. She brought a cheat sheet with her to be sure she didn't forget anything. She told me the following things: that our marriage was over. She’d never trust me in the same way again. She was disappointed that I had not confided in her about my desire. She too felt constrained by marriage. And she came to see that it was our spirit of adventure that had drawn us together in the first place, and wanted to continue on that adventure with me.
"You know, you're not the only one who wants to experiment sexually and sleep with other people," she said.

"I'm not?" I asked, both frightened and excited by the statement.

That night my wife and I unlocked the cage door and set each other free. From that point forward we both agreed to stay together only because we wanted to, and only for as long as we enjoyed each other's company.

What we learned over the next few years about sexuality and open relationships was counterintuitive, and flies smack in the face of conventional wisdom about marriage, monogamy and intimacy. We expect ourselves to evolve and expand emotionally, intellectually and professionally during a long-term marriage. So why do we feel that we must lock down our sexuality and force it to remain constant throughout the entire life cycle?

The standards of lifelong monogamy are so stifling -- and silly. You have kids together, 20+ years of experiences and history, family events, memories, but your wife goes away on a business trip and sleeps with a guy one night and that's it? Game over. You can no longer stand to look at her. Your years together are wiped out. Gone. Crushed forever.

It made no sense to me. Either couples can continue to lie about their behavior, creating rifts and distance between them, or they can grow up and realize that having sex with another is not the earth-shattering, life-altering, relationship-ending event we have made it out to be.

My wife was devastated that night as we drove back down the mountain, but we also felt a renewed feeling of intimacy and a new hope. It confounded us, but it made sense, too: Lying and deceit had added to our dissonance. Admitting the truth to my wife finally restored the bridge between us.

And eventually, a new attitude emerged. We both stopped blaming the other, and started to assume 50 percent of the responsibility for our relationship woes; we reminded ourselves what it was we liked about the other; we began to appreciate the connection we had together. I think we need a new ceremony in our society for when couples reach the end of the child-rearing years and it's time to reinvent the relationship, something like "The Liberation Ceremony," "The Letting Go" or "The Uncoupling."

Our open relationship looks different than I expected. When we first started, I was so excited by all the possibilities of potential new partners: I'd love to take her out; she'd be fun; maybe I'll ask her. But it struck me that I'd spent years playing that game, and I wasn’t all that interested. Knowing that you can have sexual experiences feels so good the actual sex is quite often not needed.

But this feeling of openness is something we can both carry with us throughout our day. We're able to interact with others freely, allowing ourselves to feel the charge of attraction, the thrill of flirtation, the daring dialogue of innuendo and intrigue. And having sex with other people makes us want each other more. Our sex life is the best it’s ever been for both of us. We can barely get enough of each other.

Most of our adventures happen together. We've experimented with swingers, polyamorous people, gay and straight couples, been to private sex parties, have had numerous mfm threesomes (our favorite), used online hookup sites – including Craigslist, where we've met some of the most intelligent, caring, exceptional people we know, but I'm no longer hungry for experiences. I feel sated.

I have found a new appreciation for my wife through this process. I began to see her through the eyes of the other men we met – and slept with. I was reminded of how beautiful she is, how fortunate I feel to be with her, and how much I love her. These days our passion toward each other is unbridled.

Will it last? Will we be together forever and ever until our dying day? Maybe. I'm not foolish enough to pretend that things don't change – that people don't change. But this summer, my wife and I will be celebrating our 19th wedding anniversary together. And we’re stronger than ever.

Mark Bentley Cohen is a writer specializing in sexual identity issues. He's currently working on "Bi, Hung, Fit... and Married", a book which details the story of his sexuality and relationship with his wife. Follow him on Twitter @vanbimarriedguy.