After Ben Affleck failed to get a best director nomination, all seemed lost. But things changed quickly 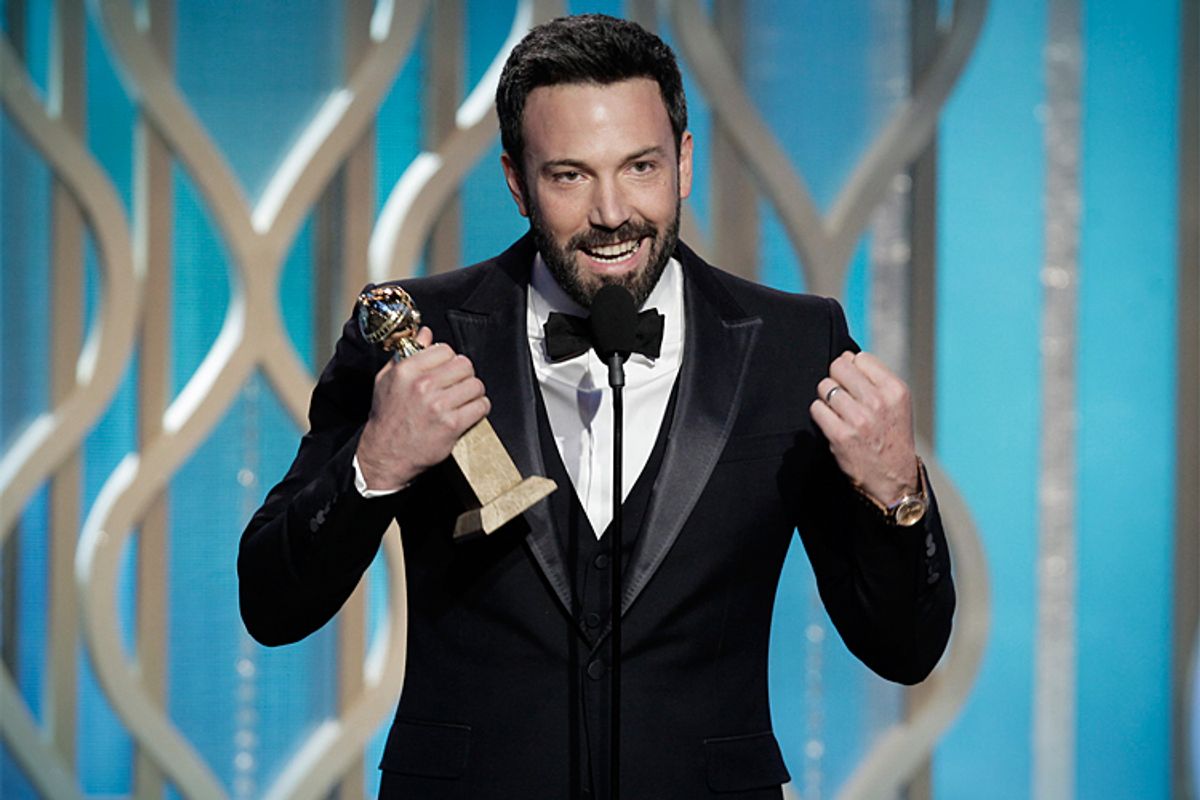 Ben Affleck with his award for best director for "Argo" during the 70th Annual Golden Globe Awards. (AP/Paul Drinkwater)
--

The biggest headline of Oscar nomination morning wasn't the 12 nominations garnered by "Lincoln." It was the one nomination that didn't happen: Ben Affleck's anticipated best director nomination for "Argo" didn't materialize, likely at the expense of two unexpected nominees (Benh Zeitlin for "Beasts of the Southern Wild" and Michael Haneke for "Amour"). This would seem to have doomed "Argo's" chances in the nine-film best picture race, where it was nominated; the last time a film won best picture without a nomination for its director was in 1989, when "Driving Miss Daisy" triumphed after surprising nominees Woody Allen and Kenneth Branagh crashed the best director party. Since then, a film without a best director nod has rarely even been taken seriously as a contender to win it all.

But everything is poised to change for "Argo." The precursor awards for Affleck and his film have been rolling in and building momentum for his Oscar campaign: The actor-turned-director picked up trophies for directing from the Critics' Choice Awards, the Golden Globes, the Directors Guild of America, and the UK's BAFTA Awards. As voting ends today, "Argo" is perceived to be in the lead: the aggregate Oscar prognosticators at Movie City News's authoritative Gurus O' Gold have overwhelmingly declared "Argo" the film to beat for best picture.

How did this happen? One theory may be that the other films simply fell away. "Zero Dark Thirty" got out of the gate strong, winning early best film awards from groups of critics in Boston, Chicago and New York, as well as the National Board of Review. But its chances with Oscar sunk as allegations regarding its depiction of torture swirled through Hollywood.

After all, "campaigning," as traditionally defined (parties and lunches for Academy members) is frowned upon by the Academy after the nominations come out. And, said Academy member Lynda Obst, campaigning "never worked anyway. In the same way that overcampaigning doesn't work for Karl Rove." But while buying ads and parties might not have gotten Mitt Romney the presidency or Affleck a best picture Oscar, a unified press strategy of bonhomie and emphasis of career difficulties might just do the job.

While "Argo" has some heft, it's hardly the controversial film "Zero Dark Thirty" is. "It doesn't have the torture baggage that 'Zero Dark Thirty' has, and it's a more entertaining story, benefiting greatly from its satirical Hollywood subplot. It's just more fun to watch than 'Zero Dark Thirty,'" said Peter Biskind, Hollywood journalist and the author of a book on the rise of independent films, via email.

And "Lincoln" has put itself forth in the press aggressively, with two discrete segments on the film on "60 Minutes," a plum spot for showcasing Oscar hopefuls, as well as an ad campaign in trade publications that frames the often light and fast-moving film as a grave story, deeply important to understanding history and America. One such ad features Lincoln and his son above a quote from New Yorker politics writer Hendrik Hertzberg saying the film has "no equal, no parallel that I know of." The film screened for Congress in December, the same month Affleck testified in front of Congress to discuss strife in Congo and two months before "Silver Linings Playbook"'s director and star got an audience with Joe Biden to discuss mental health issues. But "Lincoln" was calling for no action other than an airy sort of nostalgia.

While the "Lincoln" team had Bill Clinton present a clip their film at the Golden Globes — a move later reported to have been orchestrated by Steven Spielberg in what looked like a vote-for-me Hail Mary play — the "Argo" team brought on Tony Mendez, the real-life CIA agent Affleck plays in the film. He looked as cuddly as Uggie, the pooch that "The Artist" team brought to the Golden Globes and to individual press conferences last year before winning the Oscar for best picture. And Mendez sure has been busy: He also did a joint interview with Affleck for Entertainment Weekly, and he appeared at the Warner Bros. Christmas party.

"Argo" has a living, heroic and press-friendly spy. "Lincoln," on the other hand, has a dead president (and, in the form of Clinton, a living one). "Maybe it's too much of a history lesson," said Biskind.

In an un-"Lincoln" way, Ben Affleck has been light-hearted throughout the season: At the televised Critics' Choice awards, for instance, he made light of his "snub" at the Oscars, saying: "I would like to thank the Academy." He also ran through the career doldrums he'd endured after his tabloid fame in the early 2000s: "There was a time where the Ben Affleck Critics' Award was a 'Saturday Night Live' sketch."

Affleck's ability to direct himself out of career jail and into an Oscar-nominated film (even if he himself didn't get the nomination) has been at the center of the "Argo" team's press push. "I work with actors all the time -- it's so awesome that he did the damn thing and directed it!" said Academy member Penelope Spheeris. It helps that the personable director is, as his own lead actor, at the center of many of "Argo's" advertisements.

Make no mistake: "Argo" campaigned for nominations with parties, like a pre-nominations cocktail reception featuring Affleck and producer George Clooney. "I've been wined and dined sitting next to Martin Scorsese at the Bel-Air Hotel. You go to the lunches! They're awesome! It doesn't change the way I feel about a movie just because I had some Wolfgang Puck," said Spheeris.

But "Argo's" campaign heated up through advertising, including a big push, Spheeris noted, after the Golden Globe win. In the final campaign push, Warner Bros. bought a half-hour of prime-time television to promote "Argo," which included interviews with Affleck and Mendez.

But others are inclined to sympathize with Affleck. "Paradoxically, I think the snub was so outrageous it may have created the momentum this year," said Obst, the Academy member.

The financial incentive for minting a best picture winner is obvious: Affleck, whose previous film "The Town" was also produced by Warner Bros., clearly has a future with the studio (he's been reportedly in talks for various WB marquee parts). And a best picture win means a long future of making money through streaming and on-demand: Back when Netflix was primarily a disc-rental service, its top DVD was "Crash," a surprise best picture winner whose campaign was managed by the "Argo" team.

And careful management of that strategy has helped. When we placed a request to speak to "Argo" screenwriter Chris Terrio for a Q&A, we were asked by the PR firm Warner Bros. has contracted to provide our specific questions in advance. "I need to know exactly what you would want to talk about," said the flack. "I want to make the case that this will be a serious piece and not look to hurt 'Argo' at all." Terrio was interviewed by the Wall Street Journal and spoke about his relationship with Mendez and his rise from obscurity, which sounds a bit like Affleck's career doldrums.

Karl Rove couldn't do a better job getting a candidate on-message.