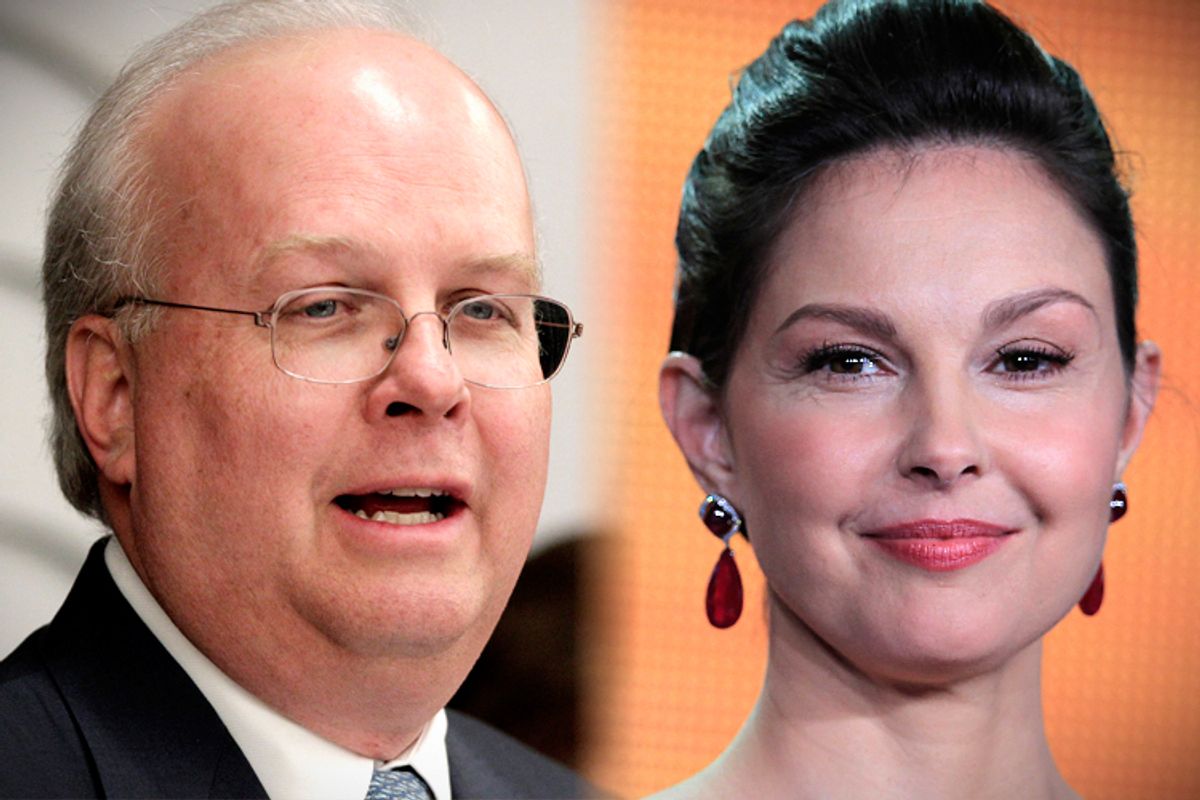 When activist and actress Ashley Judd recently announced she was mulling a run for Senate against Mitch McConnell in Kentucky, Karl Rove revealed a strategy to undermine her. It would be one he’d used before with women candidates. “We’re making fun of her,” he explained.

Give him points for honesty. The key concept behind his super PAC’s first attack ad of the new election cycle was indeed to belittle the high-profile, politically active Judd. Rove and American Crossroads GPS dropped $10,000 to “stick a pin in her balloon,” going up with a satiric Judd for Senate campaign spot that portrays her as an airhead, a “leader who knows how to follow,” and dismisses her as a silly Hollywood liberal.

Far from a unique personal shot at Judd, the attack is part of a long pattern of Rove attacking women in troubling ways rhetorically distinct from his campaigns against male candidates.

One can say that he is an equal opportunity smear artist, but there is a context and a history to Rove's anti-Judd salvo. He routinely resorts to anti-woman insults and insinuations that cut deeper than his usual attacks – characterizing women in politics as having stereotypically negative female traits (subject to hysteria, too emotional, weak and weepy, bleeding heart, flighty or frigid, and lesbian).

On mainstream women’s issues, in the last year alone Rove claimed that Democrats “worship at the altar of reproductive rights,” compared President Obama to a “third-world dictator” for requiring insurance companies to cover birth control, and sneered at the White House’s priority to ensure equal pay for equal work as evidence of “unapologetic liberalism.”

But to fully appreciate the war Rove and Crossroads GPS have waged on women candidates and leaders, consider the last election cycle.

One of his most infamous 30-second spots in 2012 featured an out-of-context snippet of a fired up Tammy Baldwin -- the seven-term Wisconsin Congresswoman and Senate hopeful -- declaring “You’re damn right” in an unidentified speech. As the Advocate newspaper aptly noted, this was a “none-too-subtle attempt to portray Baldwin as a stereotypical angry lesbian.”

Sen. Elizabeth Warren of Massachusetts faced Crossroads ads belittling her professional credentials – a tack Rove has not typically taken with male candidates -- while ridiculing them to suggest she was out of touch. One of the ads that tied her to bank bailouts derisively called her “Professor Warren" and mocked what it called a “charm offensive” she supposedly mounted with banks (even though Wall Street actually bet its campaign money against her).

To Rove, House Minority Leader Nancy Pelosi holds a special place for demonization. In June of 2012, he called the first woman speaker of the House “the Mad Red Queen.” Following the Democratic National Convention, he trained his harshest fire not at any of the men but at Caroline Kennedy, deriding her speech invoking women’s rights as “gratuitous” and a violation of religious values.

Given that Hillary Clinton has been a longtime threat to the right, one would expect that she would be a special Rove target. But virtually his entire arsenal has consisted of sexist broadsides. He once called her simply “the woman.” And according to Washington Times reporter Bill Sammons’ 2006 book about the Bush administration, "Strategery," Rove predicted Clinton’s “brittleness” would doom her presidential campaign. In a 2007 Newsweek column, he described Clinton as “hard” and “brittle,” judged her voice to be icy, and called her a phony “who calculates almost everything, including her accent and laugh.”

Rove’s salvos have not been limited to elected officials. When Sonia Sotomayor, a Princeton and Yale Law School graduate, was nominated to the Supreme Court in 2009, he told Charlie Rose, “I know lots of stupid people who went to Ivy League schools.”

Notably, his demeaning caricatures have not been limited to Democrats, either.

Of all the unelectable Tea Party Senate candidates in recent campaigns, most of them extremist men like Ken Buck and Richard Mourdock, Rove chose to pick a high-profile fight with just one: Christine O’Donnell, described by Rove as “nutty.” His tone was so angry and personal that Rush Limbaugh commented, “I’ve never heard Karl so animated against a Democrat as he was against ... O’Donnell.”

Similarly, in the lead-up to the 2012 Republican primary, Rove remained silent about implausible male Republican candidates for president like Newt Gingrich and Rick Santorum, instead singling out Sarah Palin for lacking the “gravitas” for high office. While that criticism was hardly unique, Rove went on television to lampoon her behavior in her television show ("Sarah Palin’s Alaska"). “Did you see that?” he asked, adopting a high-pitched accent to mimic Palin’s, “‘Holy crap! That fish hit my thigh! It hurts!’ How does that make us comfortable seeing her in the Oval office?” He then questioned whether Palin had thick enough skin for the rough and tumble of politics.

This pattern of attacks looks familiar to anyone who has followed Rove’s career over the years. Texas Gov. Ann Richards became the object of notorious tactics in 1994 as Rove cut his political teeth. Push polls in the governor’s race between Richards and George W. Bush asked whether people would be “more or less likely to vote for Governor Richards if [they] knew her staff is dominated by lesbians.” This gave Rove and his associates fodder to lambast Richards for appointing single women who were described as “avowed homosexual activists” to state jobs, and push the rumor that she was a lesbian herself.

So Rove’s attack on Ashley Judd is not the first time he has tried to beat down a woman in politics with well-worn sexist tropes. If Republicans want to close the 10-point gender gap they suffered last cycle, Karl Rove’s 2012 won-loss record isn’t the only factor that should give them pause.

David Brock's latest book is "The Republican Noise Machine: Right-Wing Media and How It Corrupts Democracy." He is also the author of "Blinded by the Right: The Conscience of an Ex-Conservative.