5 lessons from the horse meat scandal

As the list of food companies involved in Europe's meat crisis grows, it may be time to rethink what we eat 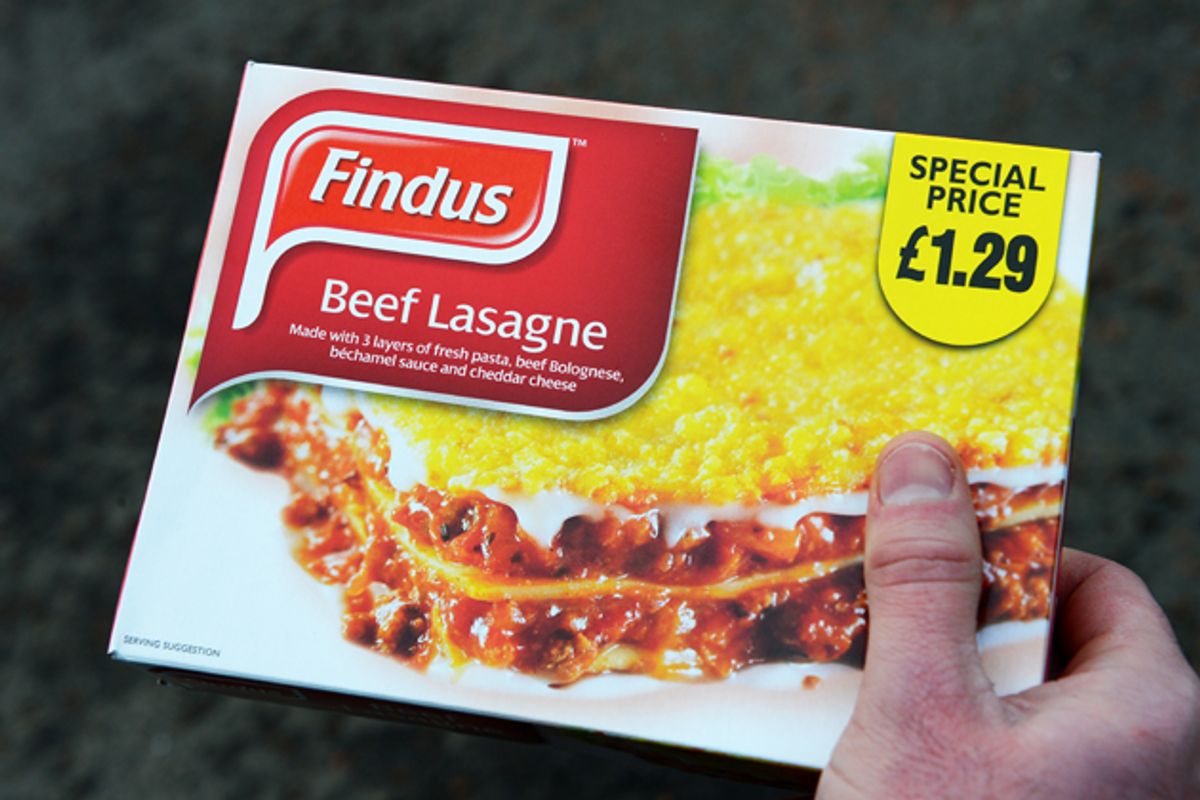 By now you’ve likely heard about the horse meat scandal that is rocking Europe. As far as food scandals go, this one is intriguing. Of course, this is not the first time we’ve learned that the meat we buy may not be everything we thought it was. Remember "pink slime"? The only good news here is that, so far, it doesn’t seem to be an imminent health threat, although it does raise some very alarming questions.

As Nestle explains, “Most Americans say they won’t eat horsemeat, are appalled by the very idea, and oppose raising horses for food, selling their meat, and slaughtering horses for any reason.” Horse meat, however, is eaten in numerous countries around the world like China, Japan and Indonesia, as well as countries in Europe, including France and Switzerland.

It’s one thing to knowingly eat horse meat; it’s quite another to have it slipped into your food. This opens a pandora’s box of questions about the food we're buying. For starters: What else is in there (donkey and pig, and the list may grow)? What does it reveal about food safety and our complex food chain? Who is responsible for duping consumers, and how did they get away with it?

It turns out there is a lot we can learn from Europe’s surplus of horse burgers.

The most recent news surfacing today is that Nestlé, one of the largest food companies in the world, has now been entangled in the scandal. The New York Timesreports that Nestlé is pulling two products sold in Italy and Spain: Buitoni Beef Ravioli and Beef Tortellini, as well as Lasagnes à la Bolognaise Gourmandes sold to catering companies in France.

Nestlé is just the latest in the list of Europe’s top food companies involved. The story first broke in the UK and Ireland when major supermarket chains Tesco and Aldi were found to be selling beef products that contained horse meat. It spun from there. AdAge reports, “Burger King binned thousands of Whoppers and Angus Burgers, which were sourced from the same Irish beef supplier, Silvercrest, and Findus ‘beef’ lasagna was found to contain 100% horse meat.”

Silvercrest has been fingered, as well as Liffey Meats in Ireland and Dalepak in Yorkshire, accordingto Felicity Lawrence of the Guardian:

Silvercrest and Dalepak are both subsidiaries of ABP Food Group, one of the largest beef processors in Europe.”

... Huge blocks of frozen meat at a cold store in Northern Ireland, Freeza Foods, which had been quarantined by officials suspicious of its labelling and state of packaging, were found to contain 80% horse.

Other top food companies were implicated when the scandal hit France (more on that soon), but the presence of large food companies at the heart of the issue is troubling. While bigger companies are often able to offer products cheaper than small and local stores, some may be questioning if the savings are really worth it if consumers are getting duped. A look at the complex supply chain raises even more fears.

Supermarket buyers and big brands have been driving down prices, seeking special offers on meat products as consumers cut back on their spending in the face of recession. The squeeze on prices has come at a time when manufacturers' costs have been soaring. Beef prices have been at record highs as has the price of grain needed to feed cattle. The cost of energy, heavily used in industrial processing and to fuel centralised distribution chains, has also soared. There has been a mistmatch between the cost of real beef and what companies are prepared to pay.

So, are we really shocked?

Getting to the bottom of how this came about has involved a lot of finger pointing. In Ireland, the ABP Food Group blamed supplies in Netherlands and Spain, and later Poland. “Five weeks into the scandal and the links in the Irish chain have still not been fully established,” writes the Guardian's Lawrence.” But this gets even more interesting in France, as she explains:

Comigel had subcontracted its ready meal production to a factory in Luxembourg, Tavola. It was supplied with meat by a company called Spanghero. Spanghero had bought meat from a Dutch fraudster already convicted of passing horse off as beef, Jan Fasen.

The Dutch trader ran a company called Draap, which spelled backwards is paard or Dutch for horse. It was registered in Cyprus in 2008, with an offshore vehicle in the British Virgin Islands. It emerged during Fasen's trial in Holland that he had supplied French companies with horsemeat imported from South America and Mexico fraudulently labelled as Dutch and German "beef" going back to 2007.

The horsemeat found in the recent tests on ready meals exported from France was said to have been sourced by Draap from Romania. The Romanian government has said its meat was legally exported correctly labeled as horse. The French government said Spanghero was the first agent to stamp the horse as beef; Spanghero has denied doing so deliberately. Fasen says Spanghero and French manufacturers were in on the deception from the beginning.

It turns out there may be a whole lot more criminal to this case.

It just so happens that Romania may have an excess of dead horses on its hands. John Lichfield of the Independent reports that a change in traffic rules is to blame:

Horse-drawn carts were a common form of transport for centuries in Romania, but hundreds of thousands of the animals are feared to have been sent to the abattoir after the change in road rules.

The law, which was passed six years ago but only enforced recently, also banned carts drawn by donkeys, leading to speculation among food-industry officials in France that some of the “horse meat” which has turned up on supermarket shelves in Britain, France and Sweden may, in fact, turn out to be donkey meat. “Horses have been banned from Romanian roads and millions of animals have been sent to the slaughterhouse,” said Jose Bove, a veteran campaigner for small farmers who is now vice-president of the European Parliament agriculture committee.

While the explanation of where some of the horse meat could have come from is straightforward, how it got to dinner plates is not. As Lichfield explains, “It came from abattoirs in Romania through a dealer in Cyprus working through another dealer in Holland to a meat plant in the south of France which sold it to a French-owned factory in Luxembourg which made it into frozen meals sold in supermarkets in 16 countries.”

From here, the story just gets weirder. Jamie Doward reports for the Observerthat organized international gangs are suspected of involvement in the scandal. Doward writes:

Experts within the horse slaughter industry have told the Observerthere is evidence that both Polish and Italian mafia gangs are running multimillion-pound scams to substitute horsemeat for beef during food production. There are claims that vets and other officials working within abattoirs and food production plants are intimidated into signing off meat as beef when it is in fact cheaper alternatives such as pork or horse. ...

"I'm concerned that this is an international criminal conspiracy here and we've really got to get to the bottom of it," [Britain’s environment secretary Owen Paterson] said.

So, we found out that beef products may contain horse, and also pig, and possibly donkey, as well. What to do with that information? For some people, it means buying less meat or from different sources. Reuters reported that 60 percent of people it surveyed in the UK said they were turning to local butchers for their meat and 25 percent said they would buy different cuts instead of processed meat.

AdAge reported that sales of frozen burgers dropped 40 percent in the beginning of February, while the meat-substitute Quorn saw a spike in sales of 10 percent. Emma Hall writes that, “More than two-thirds of British adults said they would be less likely to buy frozen meat products in the future.”

The biggest effect so far has been a drop in public trust. But after countless food safety scandals over the years, some of them deadly, why do we trust a system that’s needlessly complex?

“The food and retail industries have become highly concentrated and globalized in recent decades,” Lawrence writes for the Guardian:

“A handful of key players dominate the beef processing and supermarket sectors across Europe. They have developed very long supply chains, particularly for their economy lines, which enable them to buy the ingredients for processed foods from wherever they are cheapest at any point, depending on exchange rates and prices on the global commodity markets. Networks of brokers, cold stores operators and subcontracted meat cutting plants have emerged to supply rapidly fluctuating orders ‘just in time.’ Management consultants KPMG estimate there are around 450 points at which the integrity of the chain can break down."

That’s worth repeating — there are 450 places where something could go wrong before your food gets into your hands.

If there was ever a reason to eat more locally produced food and to know where your food comes from and who grows and processes it, this would be a damn good one because this extends far beyond just meat products, and far beyond Europe.