It’s not gutsy to come out for marriage equality now. Updated: Bush asks to have her name removed from the ad 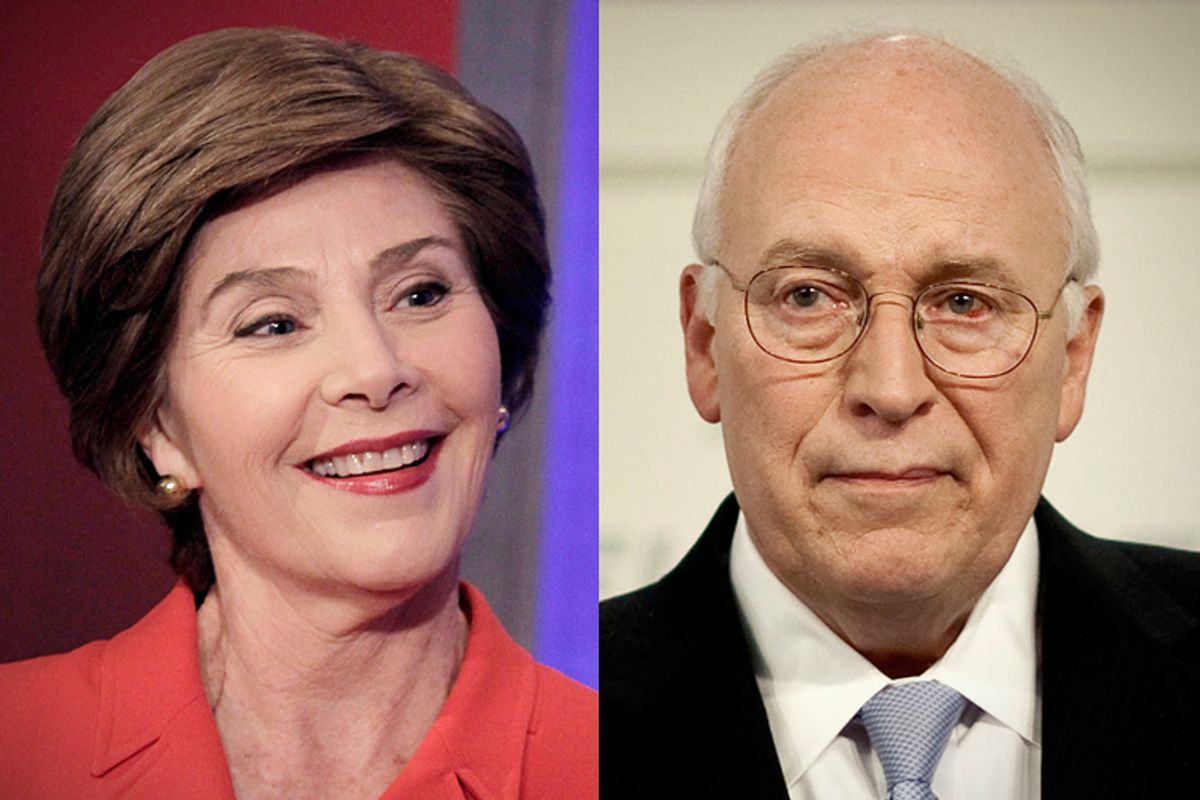 Update: Shortly after I published this piece, a spokesperson for Laura Bush confirmed that the former First Lady had requested to have her name and image removed from the ad in question.  In a statement, Bush spokeswoman Anne MacDonald said in a she "did not approve of her inclusion in this advertisement nor is she associated with the group that made the ad in any way. When she became aware of the advertisement last night, we requested that the group remove her from it.” I guess Bush showed I was right about her political courage.

As a gay rights supporter, I think the new ad from the Respect for Marriage coalition, promoting the pro-marriage equality stance of Republicans like Laura Bush and Dick Cheney, is great politics. As a Democrat, forgive me if I don’t rush to applaud them for their alleged “courage” in bucking what has been Republican dogma.

When the history of the modern GOP is written, there will be widely apportioned blame and shame over the way elite people who knew better used issues of race, gender and sexuality to scare people who were anxious about social change – mainly white people -- into blaming scapegoats: mainly African Americans, women exercising their reproductive rights, and gay people.

I say “mainly white people” because in 2004, Karl Rove was ingenious enough to try to scare black people, primarily conservative religious African Americans who were dubious about gay rights, into abandoning Democrats over the issue. Rove pushed gay marriage initiatives on state ballots, most notably in Ohio, hoping to rev up Bush’s white evangelical base while either depressing black turnout for Democrats or actively turning some black voters into Republicans (it didn’t work well.)

Rove has repeatedly denied the charge, but former Republican National Committee chair Ken Mehlman, who eventually came out himself, told The Atlantic in 2010 that Rove “had been working with Republicans to make sure that anti-gay initiatives and referenda would appear on November ballots in 2004 and 2006 to help Republicans.” Of course, Mehlman didn’t blow the whistle on Rove until after the election.

The only person featured in the ad who showed any courage in coming out for marriage equality is President Obama. He did it right after an anti-gay marriage initiative passed in the swing state of North Carolina, and some people predicted his stand might hurt him with black voters who are conservative on the issue. Instead it seemed to help nudge public opinion into the future: support for Maryland’s gay marriage initiative surged among African Americans after Obama’s declaration.

Dick Cheney’s cynicism is clear. Laura Bush is a tougher call. Everyone’s always known she’s more socially liberal than her husband. Hell, so are her in-laws: Barbara and George H. W. Bush once were such strong Planned Parenthood supporters that colleagues called Bush “Rubbers” when he was in Congress, for his stalwart sponsorship of family planning bills. While Bush switched to an anti-choice position to become Ronald Reagan’s running mate, his wife continued to say she believed abortion was a matter of "personal choice," and she publicly – and courageously – opposed the fierce anti-abortion language that went into the GOP party platform when her husband was up for re-election in 1992.

I don’t always think it’s fair to blame a spouse for a politician’s bad judgment. Still, Bush gave cover to her husband’s wedge politics. Imagine if she’d taken a page from her mother-in-law and opposed the demagoguery on gay marriage in 2004, when it was benefiting her husband’s campaign? Besides, Cindy McCain came out for gay marriage only months after her husband lost to Obama in 2008. It took Laura Bush until last year, when she was promoting her own book.

It’s also worth noting that Cheney and Bush didn’t participate in the ad campaign; it merely features pro-marriage equality remarks they’ve made in the past. (See my update, above.)

So I’m happy for my gay and lesbian friends that their basic humanity is no longer questioned by certain Republican opportunists. But I won’t join in celebrating the decency of Dick Cheney or Laura Bush right now. It takes zero courage to follow the crowd on a human rights issue, especially after your own political career is over. (Correction: I guess it takes a little political courage, since Bush removed her name.)

Partisan Washington Post columnist Jennifer Rubin wrote Wednesday that ‘it must pain the left” to see Bush and Cheney’s support for gay marriage. No, Jennifer, I’m happy to see it. It pains me that it took so long. (I'll await Rubin's reaction to Laura Bush's display of courage.)

I talked about the ad with Chad Griffin of the Respect for Marriage coalition on MSNBC's "Hardball" Wednesday: