Who opposes an anti-trafficking law? 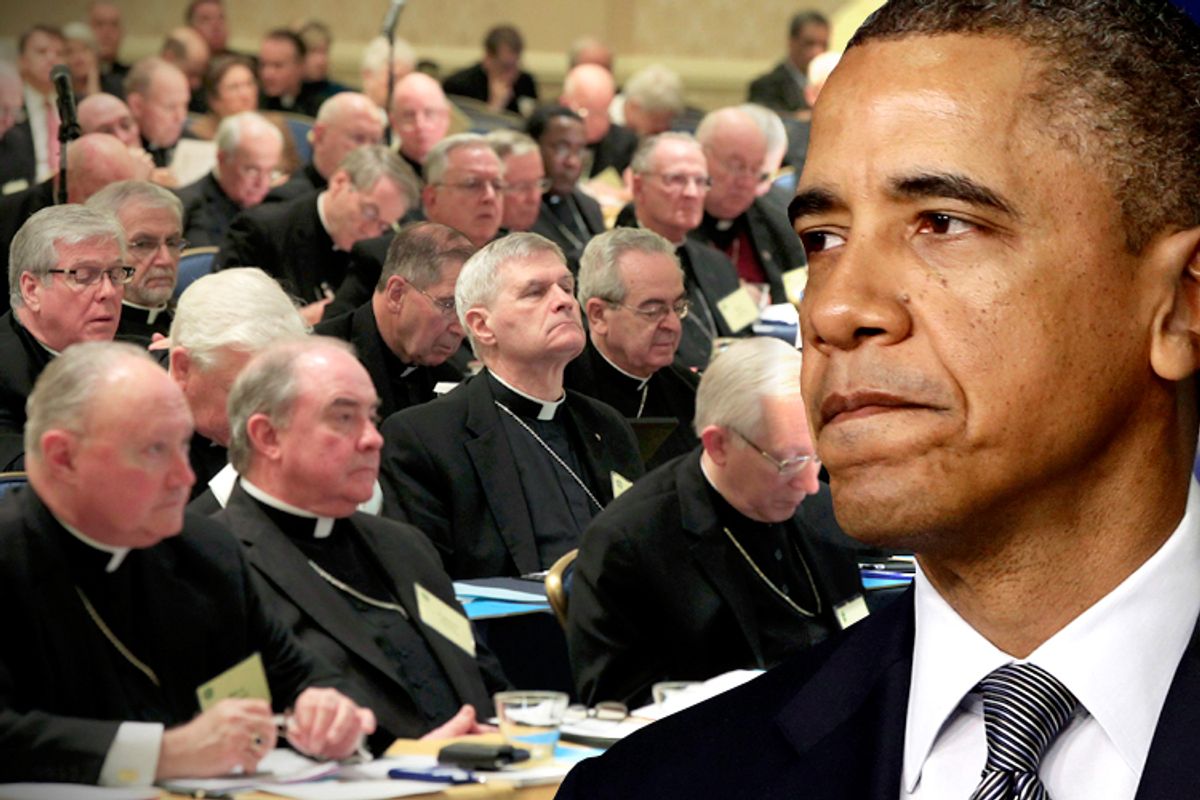 For the first time ever, the nation's signature law to combat sex and labor trafficking has fallen victim to the politics of abortion and contraception for trafficking survivors -- and an ongoing conflict between Catholic bishops and the Obama administration.

The Trafficking Victims and Protection Act, which provides both enforcement tools and services on behalf of trafficking victims, has been unanimously renewed by Congress three times since its passage in 2000 under Bill Clinton. But in September 2011, it expired for the first time over a standoff on reproductive politics. And now its fate is linked to the Violence Against Women Act, with the anti-trafficking legislation having passed the Senate as an amendment to VAWA.

The anti-domestic violence bill's stalled, politicized path has sucked up far more media oxygen than the trafficking provision, but both bills were relatively uncontroversial in the Senate, only to fall prey to culture war posturing in the House. For VAWA, the fault line has been whether Native American tribal courts could prosecute non-Indian abusers and over enhanced LGBT protections. For TVPA, it's whether the federal government should give preference for grants to organizations that provide or refer for "the full range of legally permissible gynecological and obstetric care" (read: not the Catholic Church, which has already been tussling with the Obama administration over insurance coverage of birth control).

At the center of the dispute is Rep. Chris Smith, the New Jersey congressman who was an original author of TVPA in 2000 -- an embodiment of the unusual bridges the anti-trafficking movement has built between conservative Christians, who view it as a sexual morality issue, and liberal supporters of human rights. In cases of rape, incest or life endangerment, TVPA funds can be used for abortion, and many victims of trafficking have had limited or no access to any form of healthcare, including contraception.

Around the time TVPA was scheduled to be renewed, Smith became outraged to learn the Obama administration had denied the United States Conference of Catholic Bishops a grant for services to sex trafficking victims. And he introduced a whole new anti-trafficking bill that included a "conscience clause" for the first time, allowing religious organizations to refuse services on religious grounds, and stripping the Department of Health and Human Services from any authority or funding for trafficking victims at all.

"Things got frozen in the House after the conscience clause issue came up," said Cory Smith, the legal and policy counsel for the Alliance to End Slavery and Trafficking, a coalition of groups that has taken the lead on this bill. "Things were moving along quickly with the original bill that Chris Smith had introduced. It had reported unanimously out of committee. Once [the conscience clause] happened, things ground to a halt. There was apprehension about getting involved in the politics for everyone else."

Under the Bush administration, the USCCB had been receiving funding since 2006 to subcontract out direct services for survivors, but with an extra restriction that "subcontractors could not provide or refer for abortion services or contraceptive materials for our clients pursuant to this contract," according to court documents for a lawsuit the ACLU of Massachusetts filed over the grant. The Obama administration did defend that decision in court, but changed its own policy.

The ACLU had argued that the federal funding, between $2.5 million and $3.5 million administered through HHS, violated the First Amendment by allowing the bishops to "impose religiously based restrictions on the expenditure in taxpayer funds." They won in a lower court, but last month the 1st Circuit dismissed the bishops' appeal on the grounds that it was moot, because the contract had expired and the new policy didn't violate the establishment clause. That's because HHS had begun explicitly giving preference to groups that would refer victims to the full range of women's health services.

They may have won the support of the courts, but they lost Chris Smith. In December 2011, Smith held hearings to excoriate the Obama administration for leaving out the USCCB in the latest grant process. "In what can only be described as an unconscionable abuse of power, the Obama administration has engaged in what amounts to bid rigging, denying taxpayer funds to a demonstrably superior organization," Smith said in one hearing, citing higher internal scores for the USCCB compared to two other groups that did get funding contracts.

By the end of the last Congress, the conscience clause-inclusive bill had only garnered what Cory Smith described as "a really anemic number of Republicans" as co-sponsors -- 16 -- and the session ended without a new TVPA. The anti-trafficking coalition doesn't take a position on the conscience clause, but it has a policy of not supporting legislation unless it's bipartisan, so it formally objects to the new Chris Smith bill.

"Trafficking enforcement and services did not come to an end on Sept. 30, 2011," Cory Smith explained, "but the more time goes by the more it puts into jeopardy the funding for trafficking survivors."

Last September, President Obama put some pressure on the issue in a speech at the Clinton Global Initiative, saying, "Congress should renew the Trafficking Victims Protection Act. Whether you are a conservative or a liberal, Democrat or Republican, this is a no-brainer. This is something we should all agree on. We need to get that done."

Marco Rubio, another Republican champion of the bill, told CQ before the Senate vote that “there are a few groups concerned about some of the language in there,” which he called “legitimate concerns," but that "we can work through it." He was right, at least as far as the Senate version, sans conscience clause, went: It passed 93-5. The question is, will the House follow suit, or will Rep. Smith and his allies successfully reignite another battle over abortion and contraception services for rape victims.