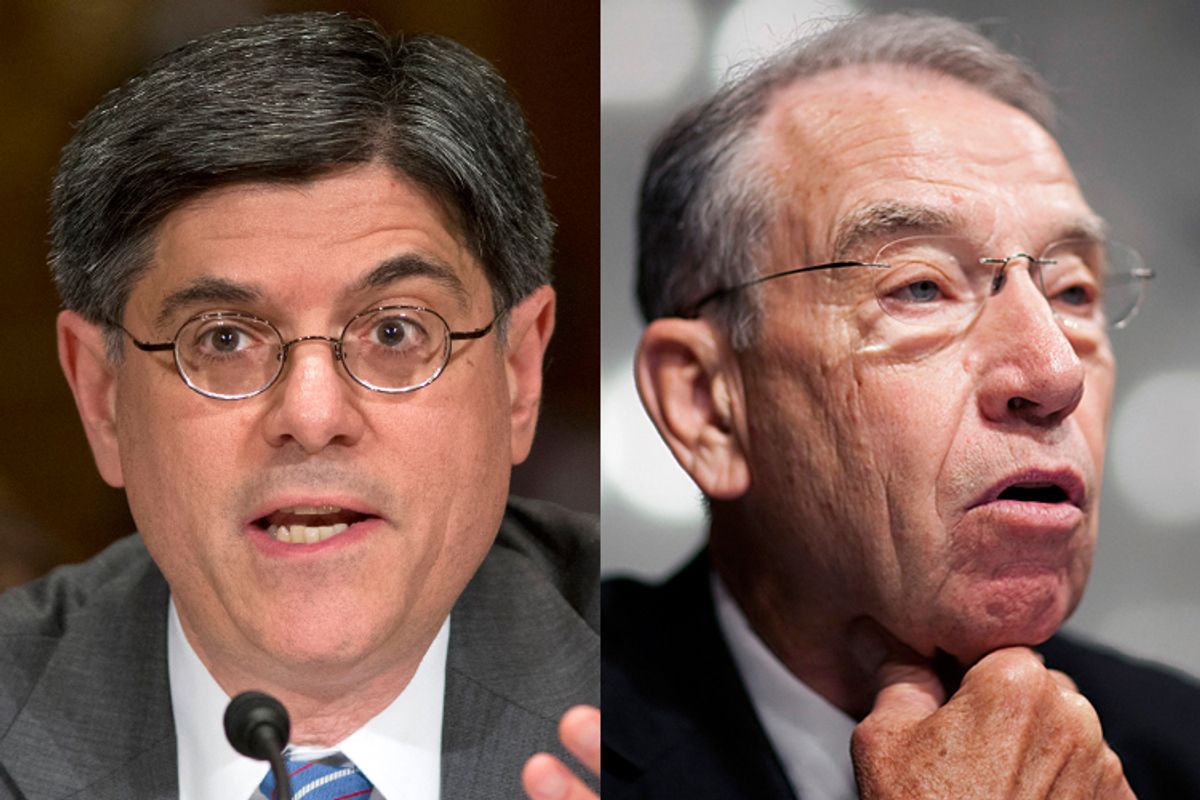 Chuck Hagel isn’t the only Obama nominee Senate Republicans are raking through the coals for dubious political reasons.The President's pick to head the Treasury, Jack Lew, is getting his own hazing.

Although it got less publicity than Hagel's hearing, Lew, too, faced a torrent of tough questions during his first round of confirmation hearings before the Senate Finance Committee earlier this month. Now, this week, Sen. Chuck Grassley, the number two Republican on the panel, is stepping up the pressure.

Yesterday, he asked Committee Chairman Max Baucus to postpone a vote on Lew’s confirmation until the he answers more of Grassley’s questions (a request Baucus denied).

At issue for Grassley is a series of loans provided to Lew in the early 2000s, especially one for $1.4 million in 2002 from New York University, where Lew served as executive vice president. Lew said the loan was to help pay for housing and was part of  his compensation package, but couldn’t recall some of the details Grassley demanded.

The Republican says he is not pleased, suggesting in a statement that Lew has not been forthcoming in answering his questions.

But, as a Democrat close to Finance Committee points out, Grassley hasn’t exactly availed himself of every opportunity he's been offered to question Lew.

Grassley was the only member of the Senate Finance Committee who refused to meet with Lew one-on-one ahead of the hearings, a common practice for presidential nominees. And Grassley left Lew’s hearing after the opening round of questions.

“If he had so many concerns and unanswered questions, why wouldn’t he stay and ask them?” the source, who asked to remain nameless, asked.

Lew has answered 444 questions submitted to him in writing, which is many more than any Treasury nominee in history. From Bob Rubin under Bill Clinton, to current outgoing Secretary Tim Geithner, the Senate has asked a combined total of 405 questions -- fewer than Lew alone.

For his part, Grassley asked 26 questions of Lew, but just 3 of Bush Treasury Secretary Hank Paulson, and none of his Bush predecessor, John Snowe.

A spokesperson for Grassley did not immediately return a request for comment, but he has previously denied any political motivations.

UPDATE: On missing the hearing and asking 26 questions, a Grassley spokesperson explains: “Between dealing with the death of a staff member and serving as Ranking Member of the Judiciary Committee's hearing on immigration, Senator Grassley had an especially demanding day... Finance Committee members asked an average of 18.5 questions each; 26 is hardly out of line."

The spokesperson continued: “Sen. Grassley declined to meet with Mr. Lew prior to the committee's hearing, as he's done with several other nominees. Nominees often can't talk about substantive issues in such meetings because they haven't formed views, they cite unfamiliarity with the specific issue, or they can't discuss pending issues because of the sensitivity of their unconfirmed positions. That's the case in many of Mr. Lew's answers to the written questions posed by senators, and that was the case with a wide variety of his verbal answers at the nomination hearing. Even if Sen. Grassley had met with Mr. Lew and discussed Mr. Lew's background, such as the loan from New York University and money in the Caymans, Sen. Grassley still would have wanted those questions answered in writing so there's a permanent record for other senators and the public to view.”