The New York Times touts the Internet's role in reviving interest in short fiction. Too bad it's not true 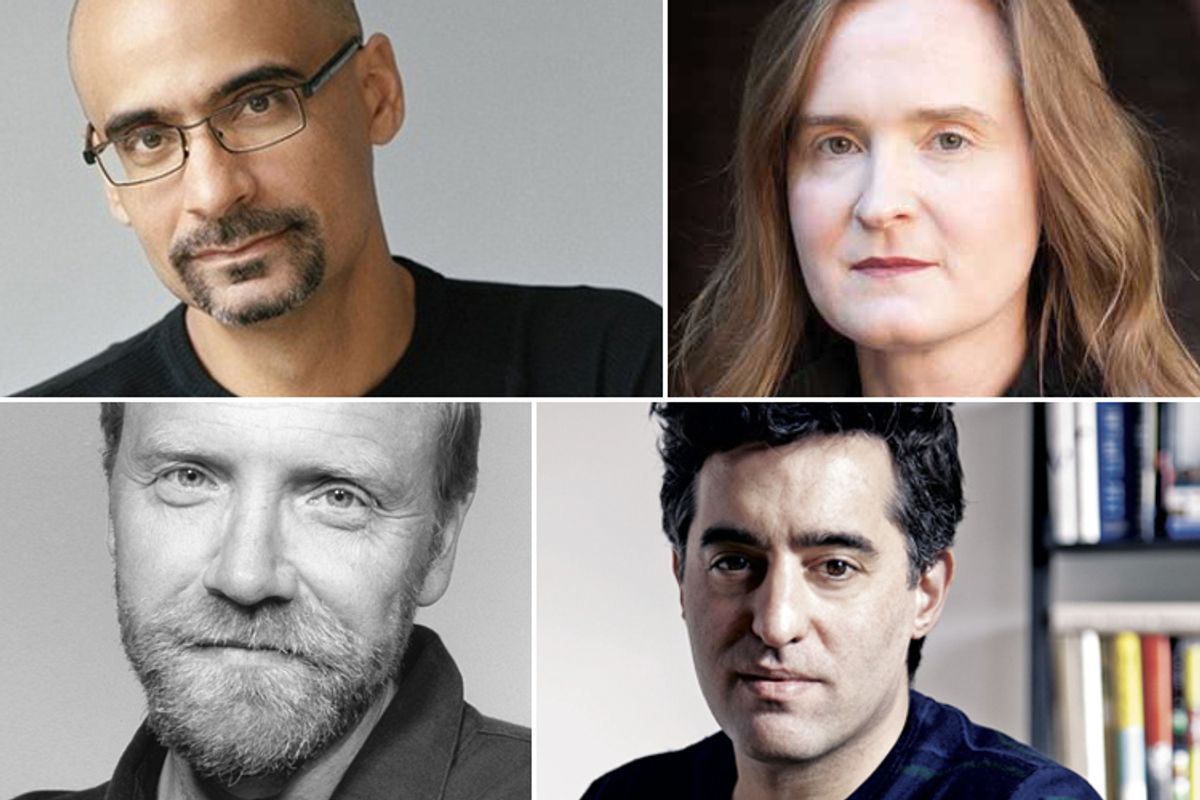 The short story, like the western, is periodically said to be on the brink of a comeback. The most recent example of this boosterism: an article by the New York Times' new(ish) publishing reporter, Leslie Kaufman, titled "Good Fit for Today’s Little Screens: Short Stories," in which "a proliferation of digital options" is said to offer short fiction "not only new creative opportunities but exposure and revenue as well."

This would be good news — if there were any reason at all to think it was true. Kaufman's only evidence for this imaginary renaissance is the success of George Saunders' story collection, "The Tenth of December," published earlier this year and currently hovering in the middle ranks of several prominent best-seller lists. Saunders' longtime fans (I count myself among them) have reason to celebrate this, but it really has nothing to do with "digital options." Saunders has built a devoted following over the past 17 years, hadn't published a book in a good while and -- most important of all -- was heralded in the headline of a long, radiant profile in the New York Times Magazine as producing "the best book you'll read this year." All of that could have happened 10, 20 or 30 years ago and produced the same result.

Kaufman goes on to marvel at the "unusually rich crop of short-story collections" published (or about to be published) this year. Some, "tellingly," are even written by "best-selling novelists"! This is all the more astonishing to her since "publishers and authors tend to be wary of short-story collections because of the risk of being critically overlooked and, worse, lower sales."

That last statement is true, except for the part about authors sharing publishers' uneasiness with collections. Many, many novelists also write short fiction, especially when they're starting out and not least because most writing workshops and MFA programs find stories easier to work with than novels. Naturally, they'd like to publish their work. So, there's nothing particularly remarkable or new about best-selling novelists writing stories or wanting to publish collections. In fact, best-selling novelists are frequently the only writers who are able get collections published because publishers can hope to capture some of the readership won by the authors' novels.

Furthermore, while 2013 does promise a fine crop of story collections, it is not any finer than last year's or the year before that or any other year for the past three decades. Yes, Junot Díaz and Nathan Englander published unusually successful collections last year, but they also published unusually successful collections in 1996 and 1999, respectively. Every so often, a short story collection achieves the sort of sales and acclaim usually accorded to novels. Jhumpa Lahiri's "The Interpreter of Maladies," for example, won the Pulitzer Prize and became a best-seller in 1999, the same year that Englander's "For the Relief of Unbearable Urges" came out, thereby prompting similar rumors of a short story revival. But as a rule collections are still regarded by publishers as a long shot.

In case you hadn't noticed, none of this has anything to do with a "proliferation of digital options." Saunders' collection is selling much better in its print form than it is in the Kindle store (No. 24 vs. No. 193), for example. Besides, any of the collections mentioned above are essentially the same book whether you buy them in print or digital form. So even if short story collections were enjoying a boom in sales at the moment, there's no reason -- or at least no reason the Times' piece presents -- to conclude that digital publishing has played any role in that (nonexistent) phenomenon.

It is true that many online outlets are now selling short fiction to readers on a per-story basis; Kaufman mentions Amazon's Kindle Singles program and Byliner, a company with which the Times launched an e-books publication program late last year. In the past, these outlets have been lauded as a new way to purvey long-form journalism: reported articles too long for many magazines but not quite as substantial as a traditional book. As a reviewer, I can attest that many nonfiction books read like padded magazine articles, and if writers can make a fair return on their investment of time, research expenses and expertise from these leaner, less expensive pieces (a big "if"), this is indeed a promising innovation. But at the moment, it's not clear that they can.

Similarly, digital publishing could theoretically help the novella -- a work of fiction somewhere between a short story and a novel in length -- out of an awkward, between-bar-stools market gap; novellas are usually too short to publish economically as stand-alone print books but an ungainly fit in a story collection. The notably creative small press Melville House publishes a novella series to which readers can subscribe, receiving two titles per month in either digital or print form. (These are, however, novellas by well-known, usually long-dead authors like Joseph Conrad and Willa Cather, and presumably most are in the public domain.)

Still, the idea that such programs have led to renewed general interest in reading short stories is, like much of the Times article, speculative and fueled by wishful thinking. "The single-serving quality of a short narrative is the perfect art form for the digital age," says one hopeful author, Amber Dermont, whose short story "A Splendid Wife" current ranks at No. 30,849 in the Kindle store. (Her novel, the recipient of a glowing front-page review in the New York Times Book Review last year, is at 14,880.)

The idea that today's time-strapped and mentally scattered readers will find short stories more congenial is far from new; I remember hearing variations on this plaintive theme from authors, editors and publishers since before the rise of the Internet. Yet there is little to suggest that it is any truer now than it was, say, when we started Salon in 1995. In fact, a survey of Amazon, New York Times and USA Today best-seller lists suggests that most readers crave ever longer and more complex fictional narratives, such as George R.R Martin's mammoth fantasy series (the basis for HBO's "Game of Thrones") or the "Fifty Shades" trilogy, in which one couple's kinky courtship is drawn out over a preposterous three volumes.

A short story can be anything from an exquisite specimen of the literary art to a diverting pastime. In its mid-20th-century heyday, when even magazines like Mademoiselle published short fiction by writers like William Faulkner, stories offered readers an hour or two of satisfying narrative entertainment at the end of the day. Television has largely replaced that function, and the literary short story itself became a more rarefied thing, a form in which writers exhibit the perfection of their technique, rather like lyric poetry. With the exception of certain communities of genre writer and readers -- most notable in science fiction -- these writers aren't reaching a wider audience because they aren't especially trying to. The question is: Has (or will) the ongoing revolution in communications changed that? Is there any reason why it should? The Internet has seen a flourishing of online literary journals like the Collagist and Narrative, but the suggestion that these sites are turning short fiction into promising new sources of "revenue" would probably make their editors laugh. Bitterly.

The advent of smartphones really is changing some Americans' reading habits. A recent Pew Research Center study indicated that, of those who read e-books, 41 percent read them on their phones (as opposed to 23 percent on a dedicated e-reader and 16 percent on a tablet). People carry their phones with them wherever they go and can snatch a page or two of reading at odd moments while waiting in line or riding the bus. (The newly coined term for this is "interstitial reading.") My own evidence is only anecdotal, but at least I can point to a few readers in my acquaintance who are reading more fiction thanks to new mobile technology. However, they're reading long novels -- public domain classics like "Middlemarch" and epics like "A Game of Thrones" -- because for the first time they can carry around a 900-page tome in their shirt pocket.

The thinking behind Kaufman's article, and in the vague and unsupported statements she quotes from assorted short story publishers and authors, seems to be that because the screens of smartphones are small, people are somehow more inclined to use them to read shorter fiction. It's an absurd notion, really, and Kaufman offers no evidence to support it. "The Tenth of December" is currently the only story collection on the national bestseller lists (print and e-book), and the bestseller lists of short-form e-publishers are dominated by nonfiction and the occasional Stephen King or Lee Child offering, reliable genre-fiction stalwarts whose works sell well no matter their length. As for how the sales of short literary texts compare to full-length e-books, it's hard to say, as the companies who sell them don't make this information readily available, and Kaufman seems to have made no effort to obtain it.

"Good Fit for Today’s Little Screens: Short Stories" was greeted with hurrahs in many quarters of the literary world. That's understandable, given that so many have striven to write and publish the best short fiction they can, only to have their work greeted with general indifference. But just because publishers are, in Kaufman's words, "sensing a market opportunity" does not mean that a new market -- let alone a booming one -- actually exists. That's not to say that it wouldn't be lovely if smartphones suddenly led to an expanded enthusiasm for literary short stories, but a newspaper's job is to describe the world as it is, not as the members of an industry wish it would be.