My best relationship is with my dog

Friends and therapists say I'm armoring myself with Tova to hide from true connection. I say she's the real deal 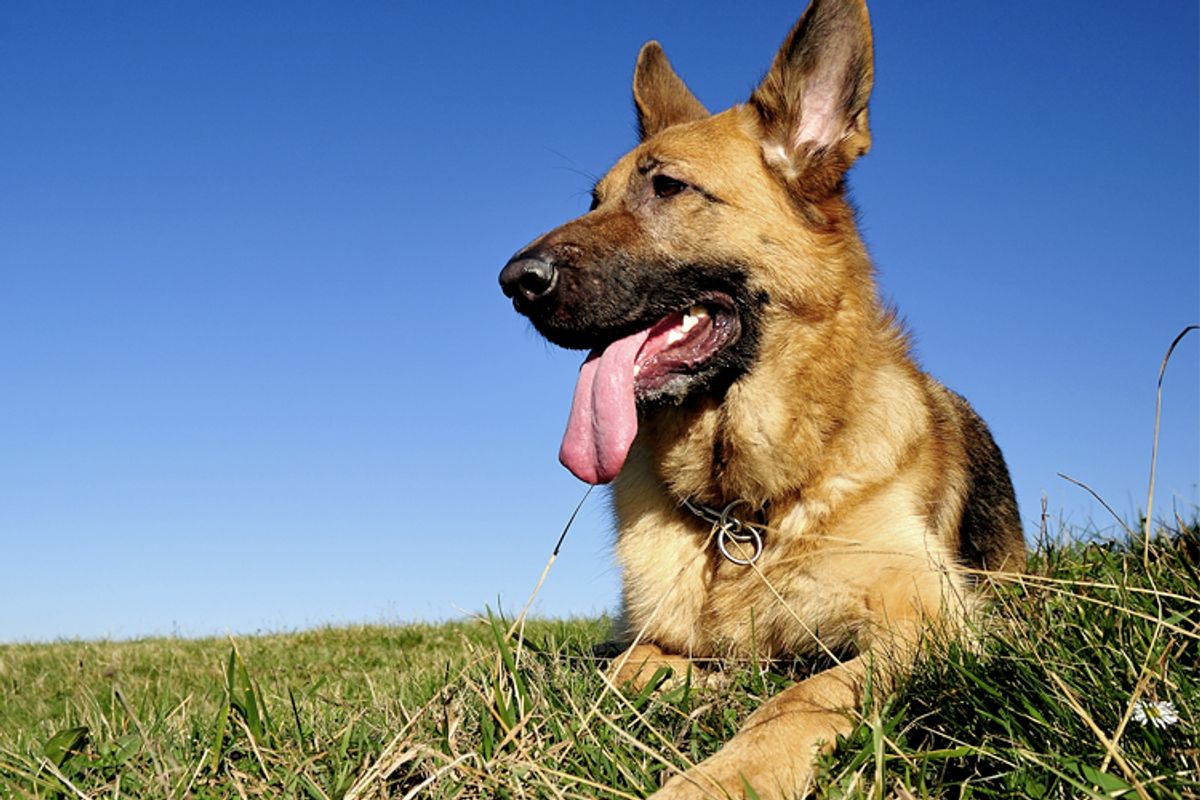 The bag of ashes is no bigger than a dimebag, but dense with the gray remains of what had been a beloved dog. The woman beside me murmurs his name—Poochie—when she takes the bag from a vet tech who can only say that he’s sorry. I instantly wish I hadn’t heard the name, as if the mere mention of poor doomed Poochie will jinx my Tova, my German shepherd. She’s flattened all 80 pounds of herself against my legs, smacking her mouth and whimpering.

We are here because Tova began pacing my apartment, her tongue shooting out of her snout; she worked her jaws and licked the air. The vet tech who answered the phone, the same one who hands Poochie’s owner a leash and collar with a heart-shaped tag, told me to bring her in right away: “It could be gastric torsion.” Gastric torsion: The belly, swollen with gas, crushes the diaphragm, pinches blood from the heart. It could kill my sweet girl—the one who finally wakes me with head-butts and nuzzling after the alarm has gone off; the one who dances when my key turns in the door—within an hour.

A nurse hustles us into a cell-gray exam area, asks me questions about Tova’s symptoms and when they started. She presses her gloved thumb against Tova’s gums; then the vet—a tall woman who swoops wordlessly into the room—kneads Tova’s belly. Suddenly, those paint-peeling fumes of dog fart fill the room.

“A bad case of colitis,” the vet says. “Irritable bowel.” The only thing the tech hands me is a pill bottle and a bill. Tova’s tail thwaps against the backs of my calves; the pressure relieved, she is back to herself. I should be overjoyed, or at least, at ease. Yet all I can think is that someday, like Poochie’s owner, I will walk out of a vet’s office with an empty collar, with my heart ground up inside a tiny plastic bag.

I’ve always known that I wouldn’t have a lifetime with Tova. She is nine years old now, and grocery store cashiers cluck sadly when they ring up her “senior blend” dog food. She’d just turned four (or so her intake papers said) days before I found her in a D.C. shelter. When I walked past her, she reared on her hind legs to paw the door of her plexiglass pen. Nobody had ever been so excited to see me.

I say that I brought her home because the man I loved wouldn’t build a home with me, but I’d wanted her—or everything she offered: a steady presence, an unspoken devotion—since I was a child pushing potatoes around on my dinner plate, wondering which Daddy would join us at the table, the happy drunk or the other one. My mother taught me the fine art of appeasement, how to save my life with a smile. My father showed me that fear and love aren’t crossed wires—they flow through a single current.

I’ve spent my life trying, desperately, to disprove that truth. I wanted to believe that people like me, angry and estranged, could find redemption—not just ache—in other people. As a teenager, I watched Will Hunting sob into his therapist’s arms until he was strong enough to go see about a girl; I cried every time James Dean laid his head in Natalie Wood’s lap and sighed like he’d never known a moment’s peace before she ran her fingers through his hair. As an adult, I joked with friends that I wanted my own Peeta Mellark, a man who could love me for my sharp edges even as he helped smooth them down.

Film and books promised redemptive love, a bond that could ease open a scarred heart. The characters suffered so that their happy endings were so much sweeter. I was no less broken than they were. I wanted someone to beg me to trust them (and be worthy of that trust), to insist that they’d never hurt me (and mean it). Instead, I found myself the grand marshal of a parade of beautiful losers, none more beautiful than the man who sang Tom Waits songs into my voicemail with a Jeff Buckley voice; the man who introduced me to everyone we met (even strangers) as “the world’s greatest living writer” and gave me seven pages of single-spaced comments on a five-page story; the man who fell off his bar stools and needed to be turned over in his sleep.

When he left me for someone who wouldn’t pour his wine down the sink, I dreamt of earthquakes. Aftershocks followed me into the waking world; I punched walls and slept with men whose names I didn’t (care to) know. Then, on the sunny Sunday before my 25th birthday, when he and I would’ve been at brunch—he’d be nursing a third, fourth, fifth mimosa, unable to stave off Saturday’s hangover but still talking about the kids we could have (he only wanted girls); I’d be watching the balletic sweep of his fingers and thinking how beautiful it’d be to grow up with memories of gentle hands—I stood in front of Tova’s pen, let her warm tongue lap my palms and said, “I’ll take her.”

I brought her home a week to the day after the shelter vet scooped out her womb; in the meantime, I read everything I could about her breed: grooming tricks and training tips, common health concerns and average life expectancy. I’d thought ten to twelve years seemed impossibly long.

Then her face bobbed up in the window as soon as I’d put my car into park, her whole being attuned to my movements with a neurotic exuberance. Then that summer storm frightened her into my bed, and she laid the length of her body over mine as if the heat of my skin could still the thunder. Then I realized that, at four, she’d already lived at least a quarter of her life (half her life, if we were unlucky), without me. With each birthday, I bargained—sure, she was five, six, seven years old, but the vet said she was in excellent health. Mostly, though, I walked her and I napped with her; I sang to her as I brushed the tangles from her coat.

Tova and I became a “we”: We’re moving in the spring; we sleep late on Sundays; we favor cafés with outdoor patios. I’d never been a “we” with anyone else: There had been me and there had been him, and there had always been more him than me. Love meant indulgence. But all those times I made Tova sit for her supper, all those tussles in the dog park that I broke up, all those moments I pulled her to my heel and let the squirrels go by—that was love.

I avoid happy hours. I nix set-ups. I decline offers to help draft a Match.com profile. I say I don’t want to leave Tova alone beyond the eight-hour workday, but I simply prefer her company. I’m tired of nodding in agreement with men who never give me a word edgewise. I’m sick of wondering if my back-fat cost me a call back. A night of humiliation is no longer worth a funny story. I’d rather be at home: reading, writing, watching classic movies and trashy TV; cuddling with my gal. It’s a quiet life (some would say it’s not much of a life at all), but it’s on my terms.

Certain friends (and at least one therapist) suggest that I’ve armored myself in my bond with her. They confuse condescension with kindness, and tell me that, since I’ve shown myself capable of motherly love, it’s time to “graduate” to “the real thing.”

Tova is not a training ground, or a means to an end. She has been my end all, be all; she’s shown me that silence isn’t always to be feared, that it’s more than the moment before a fist lands or a phone call shocks me out of sleep.

I’m no longer that kid who thinks her anger can be quelled with a kiss; the greatest thing I’ve done with my life is to become the person who deserves the implicit, unyielding trust of a dog whose name means “good.” My life divided into the years before and after a lost dog poster would haunt me for days. The gap between 25 and 30 feels like an ocean of time. It is a finger snap. I’ve loved Tova forever; our life together will never be long enough.

In the months after our trip to the ER, she will have more flare-ups. The vet puts her on antibiotics, pills and a paste I must shoot down her gullet with a syringe. She furrows her face as I part her jaws, and I notice how gray her muzzle has become.

I’m told that colitis is uncomfortable, but not fatal; still, it is an illness, an ill omen borne out in her aching, arthritic hip; in the way that she can’t take the stairs the way she used to; in the simple truth that soon, she will be ten years old, and soon, there will be no bargaining.

Loving her has turned me into a raw nerve. I recognize my love as that “strange admixture of terror, pain, and delight” that Zadie Smith defines as joy. She writes: “Isn’t it bad enough that the beloved, with whom you have experienced genuine joy, will eventually be lost to you? … An equally dangerous joy, for many people, is the dog or the cat, relationships with animals being in some sense intensified by guaranteed finitude. You hope to leave this world before your child. You are quite certain your dog will leave before you do.” Smith remembers something a writer friend said of mourning: “‘It hurts just as much as it is worth.’” I can’t imagine that first night I return to an empty apartment, that first morning I wake up alone. Yet I must.

“What an arrangement,” Smith writes. “Why would anyone accept such a crazy deal?”

The most joyful day of my life, the day I’d relive into infinity, is the day I stand in the shelter’s lobby, twisting my fingers around an empty collar. The heart-shaped tags jangle as a volunteer takes it from me. He retreats into the back, where Tova is waiting. I think “she must be as afraid as I am.” I think, “Her life is my hands.” I think, “It’s not too late to turn around and leave.” Then an intercom crackles; a woman’s voice proclaims that “Tova Bogart is going home.”

On cue, the volunteer leads her out; she doesn’t know where she’s going, but she sniffs the air and swings her tail as if this was just another stroll through the park. I have no idea what I’m in for, but I’ve never been more certain of anything. She licks my wrist when I take her leash.