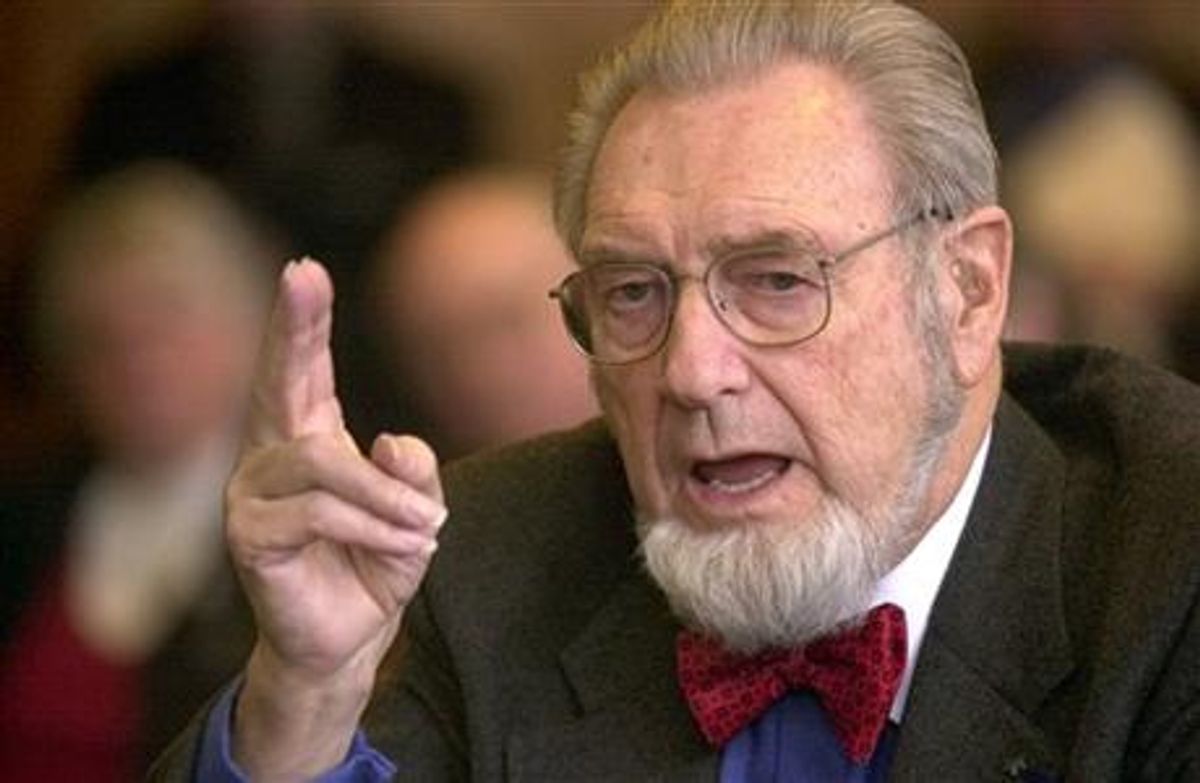 C. Everett Koop, who raised the profile of the surgeon general by riveting America's attention on the then-emerging disease known as AIDS and by railing against smoking, has died in New Hampshire at age 96.

An assistant at Koop's Dartmouth institute, Susan Wills, said he died Monday in Hanover, where he had a home. She didn't disclose his cause of death.

Koop wielded the previously low-profile post of surgeon general as a bully pulpit for seven years during the Ronald Reagan and George H.W. Bush administrations.

An evangelical Christian, he shocked his conservative supporters when he endorsed condoms and sex education to stop the spread of AIDS.

He carried out a crusade to end smoking in the United States — his goal had been to do so by 2000. A former pipe smoker, he said cigarettes were as addictive as heroin and cocaine.

Koop's impact was great, although the surgeon general has no real authority to set government policy. He described himself as "the health conscience of the country."

"My only influence was through moral suasion," Koop said just before leaving office in 1989.

By then, his Amish-style silver beard and white, braided uniform were instantly recognizable.

Out of office, he switched to business suits and bow ties but continued to promote public health causes, from preventing childhood accidents to better training for doctors.

"I will use the written word, the spoken word and whatever I can in the electronic media to deliver health messages to this country as long as people will listen," he promised.

In 1996, he rapped Republican presidential hopeful Bob Dole for suggesting that tobacco is not invariably addictive, saying Dole's comments "either exposed his abysmal lack of knowledge of nicotine addiction or his blind support of the tobacco industry."

Although Koop eventually won wide respect with his blend of old-fashioned values, pragmatism and empathy, his nomination in 1981 met a wall of opposition from women's groups and liberal politicians.

Critics said Reagan selected Koop, a pediatric surgeon from Philadelphia, only because of his conservative views, especially his staunch opposition to abortion.

Foes noted that Koop traveled the country in 1979 and 1980 giving speeches that predicted a progression "from liberalized abortion to infanticide to passive euthanasia to active euthanasia, indeed to the very beginnings of the political climate that led to Auschwitz, Dachau and Belsen."

But Koop, a devout Presbyterian, was confirmed after he told a Senate panel he would not use the surgeon general's post to promote his religious ideology. He kept his word.

In 1986, he issued a frank report on AIDS, urging the use of condoms for "safe sex" and advocating sex education as early as third grade.

He also maneuvered around uncooperative Reagan administration officials in 1988 to send an educational AIDS pamphlet to more than 100 million U.S. households, the largest public health mailing ever done.

Koop personally opposed homosexuality and believed sex should be saved for marriage. But he insisted that Americans, especially young people, must not die because they were deprived of explicit information about how the HIV virus was transmitted.

He became a hero to AIDS activists, who chanted "Koop, Koop" at his appearances but booed other officials.

Koop further angered conservatives by refusing to issue a report requested by the Reagan White House, saying he could not find enough scientific evidence to determine whether abortion has harmful psychological effects on women.

Koop maintained his personal opposition to abortion, however. After he left office, he told medical students it violated their Hippocratic oath. In 2009, he wrote Senate Majority Leader Harry Reid urging that health care legislation include a provision to ensure doctors and medical students would not be forced to perform abortions. The letter briefly set off a security scare because it was hand delivered.

Koop served as chairman of the National Safe Kids Campaign and as an adviser to President Bill Clinton's health care reform plan.

At a congressional hearing in 2007, Koop spoke about political pressure on the surgeon general post. He said Reagan was pressed to fire him every day, but Reagan would not interfere.

Koop, worried that medicine had lost old-fashioned caring and personal relationships between doctors and patients, opened an institute at Dartmouth to teach medical students basic values and ethics.

He also was a part-owner of a short-lived venture, drkoop.com, to provide consumer health care information via the Internet. It made its initial public offering of stock in 1999, but expenses outstripped revenue and it was out of business by the end of 2001.

In July 2001, the company agreed to pay $4.25 million in cash to settle lawsuits filed by investors who claimed drkoop.com made false promises. Company officials did not admit wrongdoing.

Koop was born in New York's borough of Brooklyn, the only son of a Manhattan banker and the nephew of a doctor. He said by age 5 he knew he wanted to be a surgeon and at age 13 he practiced his skills on neighborhood cats.

He attended Dartmouth College, where he received the nickname Chick, short for "chicken Koop." It stuck for life.

He received his medical degree at Cornell Medical College, choosing pediatric surgery because so few surgeons practiced it.

In 1938, Koop married Elizabeth Flanagan, the daughter of a Connecticut doctor. They had four children — Allen, Norman, David and Elizabeth. David, their youngest son, was killed in a mountain-climbing accident when he was 20.

Koop was appointed surgeon-in-chief at Children's Hospital in Philadelphia and he also served as a professor at the University of Pennsylvania School of Medicine.

He pioneered surgery on newborns and successfully separated three sets of conjoined twins. He won national acclaim by reconstructing the chest of a baby born with the heart outside the body.

Although raised as a Baptist, he was drawn to a Presbyterian church near the hospital, where he developed an abiding faith. He began praying at the bedside of his young patients — ignoring the snickers of some of his colleagues.

"It used to be said in World War II that there were no atheists in foxholes," he wrote in 1973. "I have found there are very few atheists among the parents of dying children.

"This is a time when religious faith can see a family through trying circumstances."