“The Oscars” hired a host to shower contempt on the nominees, the industry and the audience 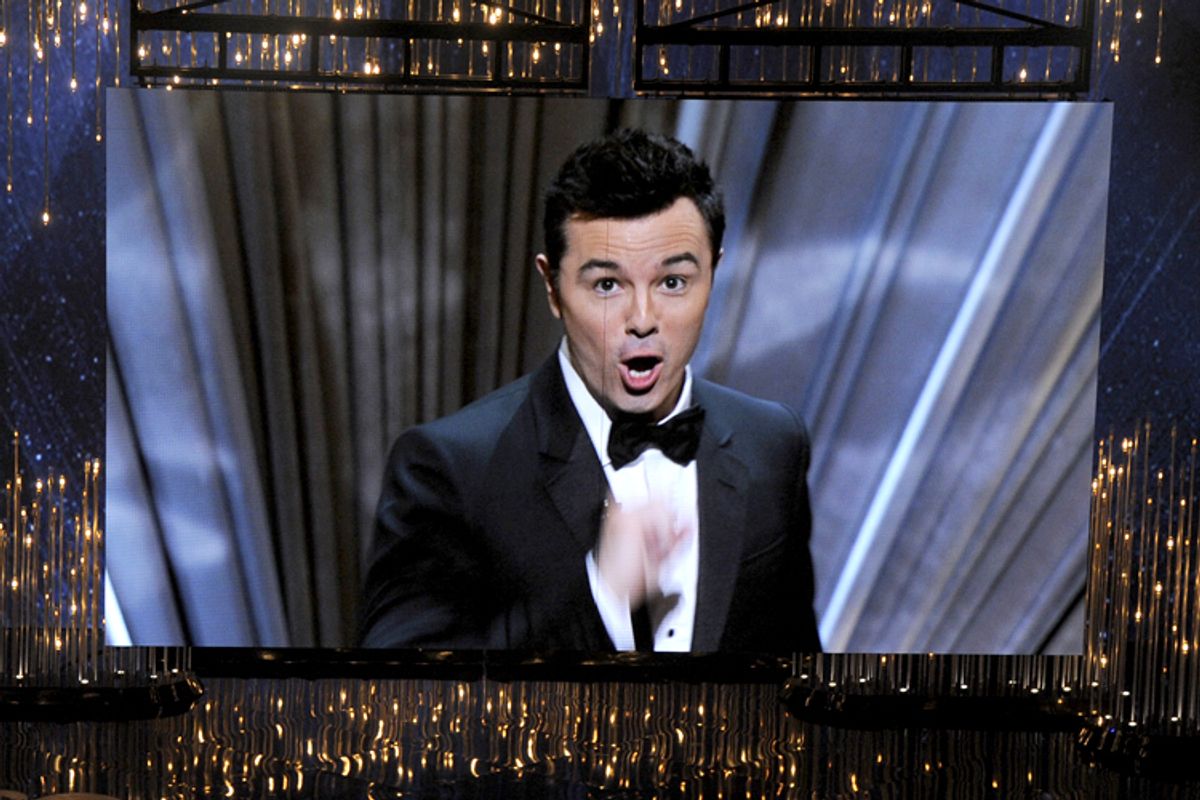 I was rooting for Seth MacFarlane, thinking his sexist jokes were a satiric send-up of sexism, until the “joke” about Jennifer Aniston’s “past’ as a stripper, or maybe the one about actresses throwing up to fit into their gowns. I thought “We Saw Your Boobs” was funny, since it came as part of an introduction where William Shatner tried to prevent MacFarlane from bombing as a host: I believed it was a parody of a kind of fratty humor the “Family Guy” creator would have to rise above (getting a few laughs while indulging it.) But it wasn’t a parody, it was the night’s theme song.

Still, I don’t entirely blame MacFarlane for his insulting, sexist shtick. It’s a symptom of the people who run the awards ceremony – they still call themselves “The Academy” though the awards now have the folksy name “The Oscars” -- utterly losing their way. The Shatner bit mocked the way the show, sadly, has become all about the host, and how badly he or she bombed. Or maybe didn’t bomb, but didn’t do well enough to come back the next year. And let’s face it: The main thing hosts are judged on is whether they skewer the winners, and the entire process, with exactly the right tone. But no one has decreed exactly how nasty that tone should be: How much are we supposed to hate these people, anyway?

There’s no denying the Oscars have become a kind of stand-up comedy audition for a good host. In the last 16 years, it’s had a different M.C. every year, a blur of Billy Crystal, Whoopi Goldberg, David Letterman, Whoopi, Billy, Whoopi, Billy, Steve Martin, Whoopi, Steve, Billy; Chris Rock, Jon Stewart, Ellen DeGeneres, Stewart again, and then the lost years: Hugh Jackman, Alec Baldwin and Steve Martin, Anne Hathaway and James Franco, poor Billy again, and now Seth. That’s right: no one has done it even twice in a row.

In the golden age for Oscar stability, 1939 to 1967, Bob Hope hosted or co-hosted 17 of 28 shows. In between, they’d go with ensemble casting that combined glamour and humor. Between 1955 and 1997, three dominant hosts – Hope, Johnny Carson and Billy Crystal  – combined to do 20 shows, and each of them had at least one stint of four consecutive years, a mini-era, if you will.  Since then, it’s been 16 consecutive auditions.

What are they looking for? Well, it’s obvious they want younger viewers, a quest that hit bottom when Anne Hathaway was teamed up with James Franco, who didn’t show up. But the job description also comes with a sadism quotient: They have to needle the nominees expertly, but without drawing (visible) blood. Of course the winners participate, as if to appease vengeful gods, who would take away their cheekbones and glossy hair and paychecks and overall great good fortune if they didn’t allow themselves to be mocked for one national night of all-in-good-fun.

When it works, it is good fun, with just enough admiration, affection and mockery. Mockery is essential to the formula; the host has always been a comedian except in those ensemble years. But because they’ve changed hosts so many times, the meta story – and to insiders, the only story that matters -- is how did the host do, or how badly did he bomb. To an extent, MacFarlane gave the academy exactly what it deserved. (And let’s remember, people, his script was pre-approved, probably by many layers of powerful vetters.)

We’ll be talking for a long time about what it meant that MacFarlane’s nastiest humor came at the expense of women, gays, blacks and Latinos, Jews, Quvenzhané Wallis and Abraham Lincoln. Maybe his appalling John Wilkes Booth joke was intended to get into our own heads and say: Yes, this is just as awful as you think it is. And it’s supposed to be.

In the end, it was unfair but almost irresistible to lump in the Onion’s unbelievably misogynist and possibly racist tweet calling the delightful 9-year-old Wallis the C-word with the whole night. Is satire becoming synonymous with insulting women and minorities because it’s not OK anywhere else, but the pressure to do it is just so strong? The Onion apologized, and it was always clear that it was more a joke gone horribly wrong, an attempt to lampoon the kind of abuse actresses endure (even from other actresses) than a deliberate attempt to insult a little black girl. But given all the bad humor, sometimes it was hard to tell.

I think that tweet made clear, as did Willa Paskin’s piece here, that both the Onion and MacFarlane were riding our own ambivalence and/or contempt for our biggest stars – and women always come in for the worst abuse. Why were the two biggest goats Anne Hathaway and Kristen Stewart? One we mock for caring too much and playing the game too perfectly; the other we mock for not caring enough. We still, all of us, hold women to a higher standard than men. Sure, male stars were mocked, often for things like womanizing (oh, that incorrigible George Clooney!) or starring in bad films with their then-girlfriends (Ben Affleck seemed furious).

Still, women got their revenge: Shirley Bassey and Adele's rendition of James Bond themes was probably the high point of the night, and since one is older and the other more zaftig than your usual female celebrity, it was a win for Team Woman. So was Michelle Obama's surprise appearance, announcing the best picture winner. It undermined the show’s entire nasty, cynical message: The wildly popular first lady, known for her ability to poke fun at herself (latest example, her “Evolution of Mom Dancing” routine with Jimmy Fallon), but also her passion and sincerity, gave us permission to just enjoy the party. A global celebrity, Obama is also the First Fan, a wide-eyed movie-lover, and she made it safe to love our stars, not merely mock them.

Of course, the show seemed to be saying it wasn’t safe to have her on the same stage with the freakishly talented notorious womanizer Jack Nicholson. Even the popular first lady, it seems, can be judged by her ability to attract a host’s lechery and/or fight it off (Nicholson said as much, muttering “no one’s gonna mess around with that, are they?” after Obama appeared.) Well, you did, Jack, a little.

The bottom line: This show is a mess. Don’t blame MacFarlane, entirely: He’s just the messenger.