Michelle is the next Hillary

She dazzled on Fallon and the Oscars, and a poll has her leading for Senate. Another first lady with major options 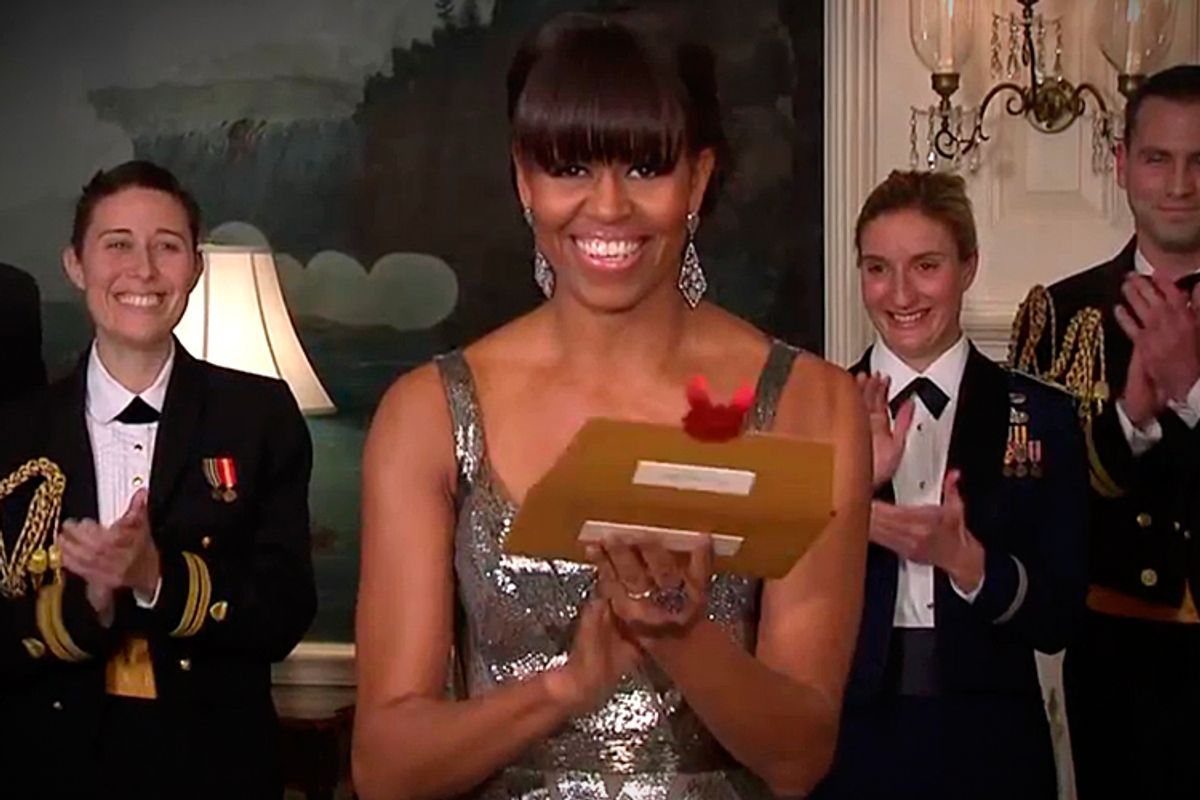 In the months after Bill Clinton's second election, few would have guessed that first lady Hillary Clinton would be just a few years away from a successful run for Senate, a stint as secretary of state, and the subject of front-running buzz to be the next president of the United States.

Of course, it turns out she was. And the current first lady, Michelle Obama, is more popular than Clinton was then. So, what does the future hold for her?

After a winning weekend on Jimmy Fallon's show and the Academy Awards, it's clear she will be in demand.

There’s a tradition at the Oscars of an elder statesman of Hollywood (and they are mostly statesmen) presenting the award for best picture at the end of the perennially overtime award show. Last year it was Tom Cruise, the year before that it was Steven Spielberg (his third appearance in 10 years), and before that people like Tom Hanks, Denzel Washington, Harrison Ford and Clint Eastwood.

So it was a surprise last night when Jack Nicholson strutted onstage and turned skyward to take in the countenance of the special guest being beamed in live from the White House on a giant screen overhead. On the screen, the first lady, standing and chatting with service members in formal wear, doing a classic, “Oh hi, I didn’t see you there” fourth wall greeting. But it wasn't really that big of a surprise.

Why Michelle Obama? Though the winner she announced, “Argo,” had some Washington drama in it, she made no mention of politics or patriotism or the troops, and only passing reference to children, which has been the focus of much of her work in the White House.

Why doesn’t matter. Obama was simply there to be Obama because she, Michelle Obama, would present the Oscar for best picture and because America can't seem to get enough of her. She’s competed in a pushup contest with Ellen DeGeneres, guest-hosted “Extreme Makeover: Home Edition” and other reality TV shows at the White House, sketched with Jimmy Fallon, and honed her award chops at the BET and Nickelodeon Kid’s Choice Awards. She has almost 100 IMDB credits to her name.

On Friday, she appeared on Jimmy Fallon’s show to perform in the “Evolution of Mom Dancing.” Wearing a cardigan and standing next to Fallon in his most matronly drag ensemble, the comical sketch was a world away from the formal Oscar presentation, but felt natural nonetheless and completely in keeping with the cultural persona Obama has built around herself.

Kristina Schake, Obama's communications director, told Salon, "The Academy Awards approached the first lady about being a part of the ceremony.  As a movie lover, she was honored to present the award and celebrate the artists who inspire us all -- especially our young people -- with their passion, skill and imagination." Hollywood magnate Harvey Weinstein helped make the connection.

And in case she hadn’t already earned the status, the double whammy of a weekend will help cement her position as an exceptional cultural icon.  And while every first lady is a public figure, not everyone could do what she does and get away with it. Obama often gets compared to Jackie Kennedy, but unlike Kennedy, who represented an aspirational elite lifestyle, Michelle Obama is aiming her product squarely at the attainable middle class, and gets only less formal and freer with time (the bangs, the Target shopping spree).

If she did have political ambitions, say, to retake the Illinois Senate seat currently occupied by Republican Mark Kirk until 2016, she would be well positioned to do it, and boosting her profile by announcing the winner of the Academy Awards can probably only help.

Barack Obama’s approval rating is as high as it’s been since shortly after the killing of Osama bin Laden’s, but Michelle’s is much higher. Fully two-thirds of Americans hold a favorable opinion of her, according to a recent Pew poll, while just 22 percent have an unfavorable view. And when her husband’s approval ratings have dropped, such as in the lead-up to the 2010 election or during the fiscal cliff negotiations in 2011, her numbers have consistently stayed above 60 percent, leaving only to occasionally climb into the 70s.

(Interestingly, it wasn’t always that way. In the summer of 2008, polls put her approval rating in the low 50s, while Gallup even had her down to 43 percent at one point in June. However, the numbers shot up after the election and haven’t looked back.)

Of course, some of that is expected, as first ladies are often naturally more popular than their husbands, whose job description includes making painful and unpopular decisions. But Obama has still managed to exceed.

In Illinois, Obama is already the front-runner, leading Kirk 51-40, according to a December PPP poll.

If she runs for the Senate, she’d obviously be following precedent established by Clinton, who successfully ran for a Senate seat from New York after leaving the White House in 2000.

But Hillary Clinton had, according to Pew, “a volatile relationship with the public over the past eight years, with job approval ratings ranging from 54% to 80% and favorability scores ranging from 43% to 67%.” During the first term, her numbers were often below those of Bill Clinton, dragged down by the Whitewater investigation. But beginning in the end of 1997, and thanks in part to the Monica Lewinsky scandal the next year, her ratings shot up and stayed high, letting her leave the White House with a 67 percent approval rating. She went on to handily win the Senate seat that same year.

Laura Bush was exceedingly popular, never dipping below the 60s and even reaching the 80s, but she did this in part by lying low, while Clinton took a leading role in policy formation, especially around healthcare.

The risk with this approach, of course, is that a woman who was more successful than her future-president husband for much of their marriage doesn’t showcase her full range.

Her appearances on Fallon and at the Oscars are what make Americans love Michelle Obama, and now the question is what she’s going to do with it.