What was Ben Affleck thinking?

In a moment of triumph, he thanks Jennifer Garner for "working" on their marriage. Oscar attracts spousal weirdness 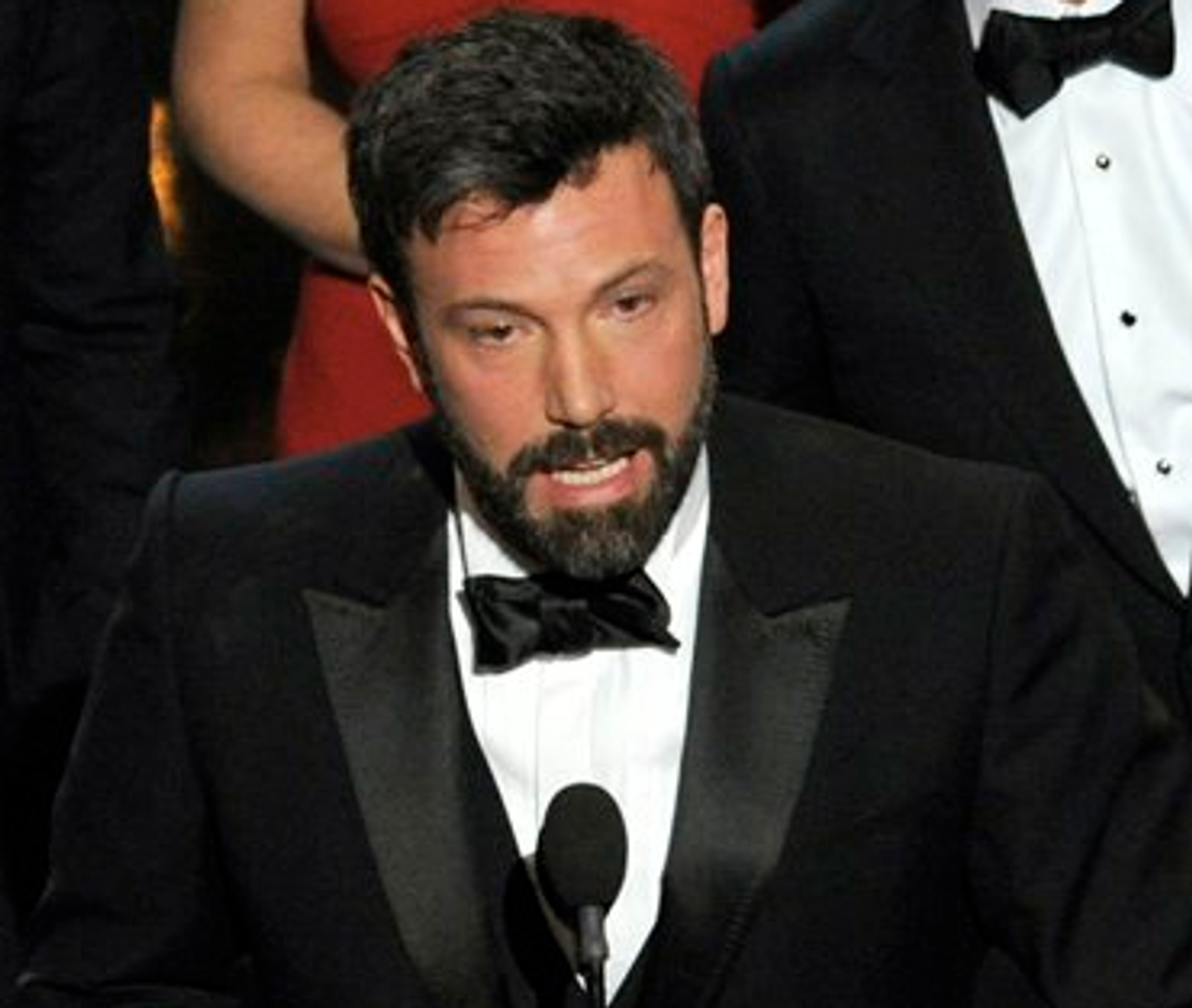 Ben Affleck is a very likable guy. And his marriage to Jennifer Garner seems genuinely down to earth in some ways. She wears mom jeans and very uncool white running sneakers on school pickups. He is outnumbered by females in his home and has to decorate the occasional tiny cake. Their kids pick their noses. Life, man!

So I think it's commendable that Affleck wanted to keep it real in his Oscar acceptance speech Sunday night. But his "marriage is work" shout-out to Garner was maybe a little too real.

I want to thank my wife -- who I don't normally associate with Iran, but. I want to thank you for working on our marriage. I don't ten -- it's it's it's good. It is work, but it the best kind of work -- and there's no one I'd rather work with!

Save it for the couch, Affleck!

But he's not alone in the annals of actors bizarrely (or, as is more often the case, not) acknowledging their spouses in Oscar acceptance speeches. In fact, he's keeping pretty good company.

At the 2000 Academy Awards, Hilary Swank famously forgot to thank her then husband, Chad Lowe, while accepting the Oscar for "Boys Don’t Cry." Do you know what made it even weirder? Producers kept cutting to a tearful Lowe while Swank thanked everyone but him.

But don't worry, Lowe got his moment in the sun when Lena Dunham thanked him in her 2013 Golden Globes acceptance speech, saying, "I also promised myself that if I ever got this chance, I would thank Chad Lowe. I’m sorry, I just promised."

In her 2010 win for "The Blind Side," Bullock omitted then husband Jesse James from her very long, very family-focused acceptance speech. Though she left out James, she did work in a nod to her "lover Meryl Streep."

But it was probably for the best: James' affair was splashed across the headlines only a few short months later. Now Bullock doesn't have to edit down the footage for her digital scrapbook. (Celebrities have those, right?)

Maybe it was a byproduct of the "no ladies allowed" vibe achieved by putting basically every other man in Hollywood onstage with Penn while he accepted the 2009 Oscar for "Milk," but he definitely failed to mention then wife Robin Wright, even though the camera, once again, kept cutting to her.

Perhaps also worth mentioning: They announced their split in April of that same year.

Hey, you don't have to be married to find your way onto this roundup! Hoffman left longtime partner and mother of his three children Mimi O'Donnell out of his 2006 win for "Capote." While he did manage to work in a shout-out to Irish crooner Van Morrison and his mother (Marilyn O'Connor -- so close to O'Donnell!), a visibly flustered Hoffman forgot to mention the woman he was sitting next to the whole night.

My theory? It was Swank who presented Hoffman with the award, and the odds are good that partner omission speech disorder is a contagious disease.

On the fence: Tom Hanks

Hanks gets points for thanking longtime love Rita Wilson right up top in his acceptance speech for "Philadelphia" in 2008. He loses points for saying "lover" more than once in his remarks. I know they don't serve food at the Oscars, but it's still not nice to make the audience queasy.

Jolie gets a place on the list for thanking her brother, James Haven, as if they were married. Jolie brought Haven along as her date to the 2000 Oscars, and let the world know just how much she loved him in her acceptance speech for "Girl, Interrupted":

"I'm so in love with my brother right now. He just held me and said he loved me and I know he's so happy for me. Thank you for that ... Jamie, I have nothing without you. You are the strongest most amazing man I've ever known. Thank you, I love you."

Now, I can hear some of you thinking, "That's nice and not that weird, actually." And you're kind of right. But do you know what's really weird? The passionate post-Oscar lip lock Jolie and Haven shared later that same night.

Related: How to do it right

Want a quick lesson in how to properly thank the person you love on Oscar night? Let's observe Adele, who through a moving and adorably tearful speech, managed to work in a quick, "And my man: I love you baby." Perfectly succinct, perfectly sweet.