Rich donors yell at Ken Cuccinelli for being too nutty 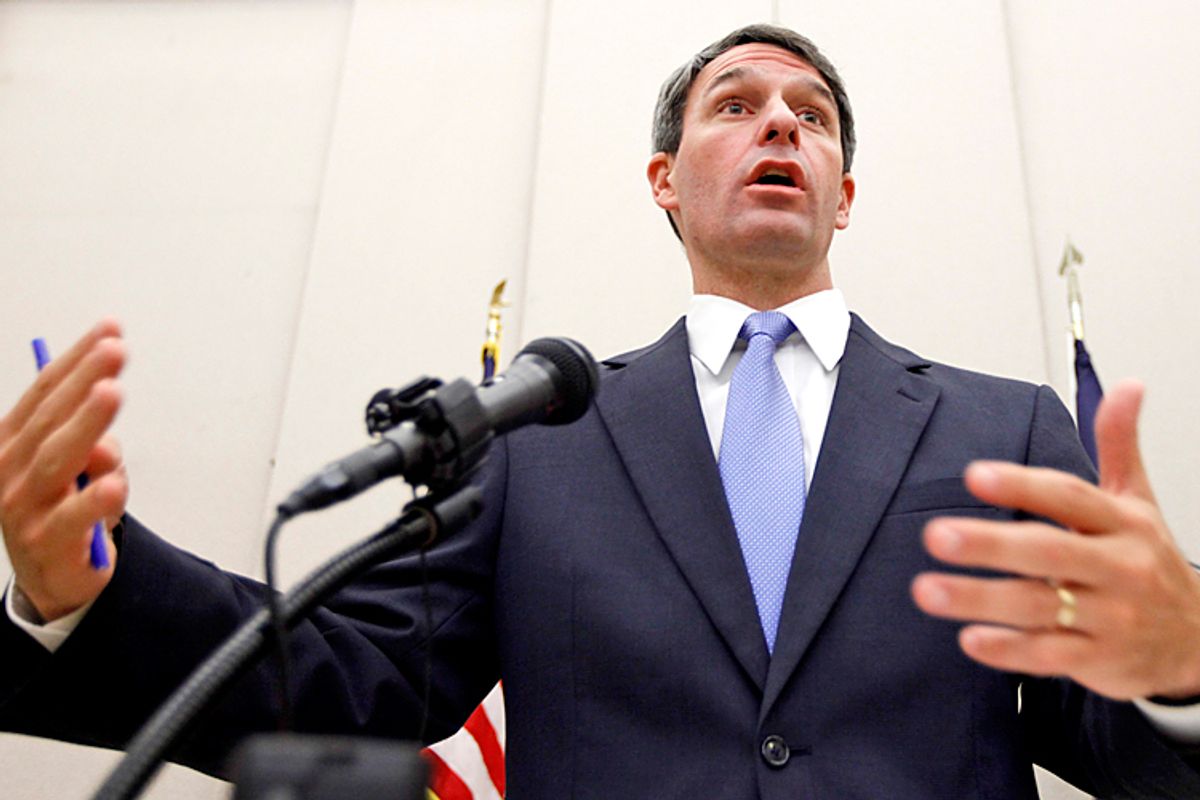 Attorney General of Virginia Ken Cuccinelli made himself a national political figure by following the Tea Party script: Get the attention of the liberal media and the affection of pissed-off old white conservatives by loudly opposing Barack Obama and embracing all sorts of far-right issues. He's a bomb-throwing undiluted right-winger who hits just about all of the modern conservative populist notes besides birtherism, though he's careful not to antagonize birthers. He filed suit against the Affordable Care Act. And the EPA. And a climate scientist. He's endorsed antiabortion and anti-contraception laws. He supported an Arizona-style immigrant-harassment policy. He opposes gay rights. He opposes fuel efficiency standards. He's the sort of post-Bush era ultra-conservative Republican who is supposedly making the party unable to compete outside the old Confederacy and parts of the Southwest. Now he's running for governor.

Virginia isn't the Virginia it used to be, though. It went for Barack Obama twice, and Democrats are regularly elected to state office. This puts the party in a bit of a bind: A "reasonable" Republican would have a good shot at being the next governor, but Cuccinelli scared the "reasonable" Republican out of the race. So according to Politico, a bunch of "business leaders" just yelled at Cuccinelli for being a far-right crank in a state that is increasingly full of David Brookses.

Kilberg, who is close with Virginia Gov. Bob McDonnell, spoke first and noted that the state has become "purple." She pointed out that McDonnell has sought to govern in the mainstream. But then she wondered aloud if Cuccinelli’s crusading brand fits Virginia’s present political and demographic reality.

Shapiro spoke up next and was even tougher on Cuccinelli. As a hushed room looked on, Shapiro, who sits on the board of the influential Northern Virginia Technology Council, said the state’s centrist-oriented business community won’t back the Republican standard-bearer because he’s out of the mainstream.

So Cuccinelli just met the Republican donor base, and learned that what they're looking for in a candidate has recently grown pretty far apart from what the Republican activist base wants. In Virginia, the rich people want another Bob McDonnell, who'll keep taxes as low as he can but who won't scare well-off exurban women who, say, would like to continue to have access to contraception. Someone like McDonnell is more at home on a Sunday show panel than Hannity, but Cuccinelli's been playing the Hannity game for so long it's hard to see how he could shift gears without destroying his brand and coming off as totally inconsistent and unconvincing.

This is, perhaps, a small preview of the 2014 Senate campaign, which will pit Karl Rove and his giant pile of money for electable Republicans against the enthusiasm (and, yes, other money) of the dead-ender ultra-conservatives. I'm sure Iowa's Steve King is watching closely.

There's good news for Cuccinelli, though. The Democrats are most likely going to select as their nominee lifelong Democratic Party hack Terry McAuliffe, a political operative with no electoral experience, meaning any Republican -- even one who acts like he's from a state or two further to the south -- has a decent shot at winning.