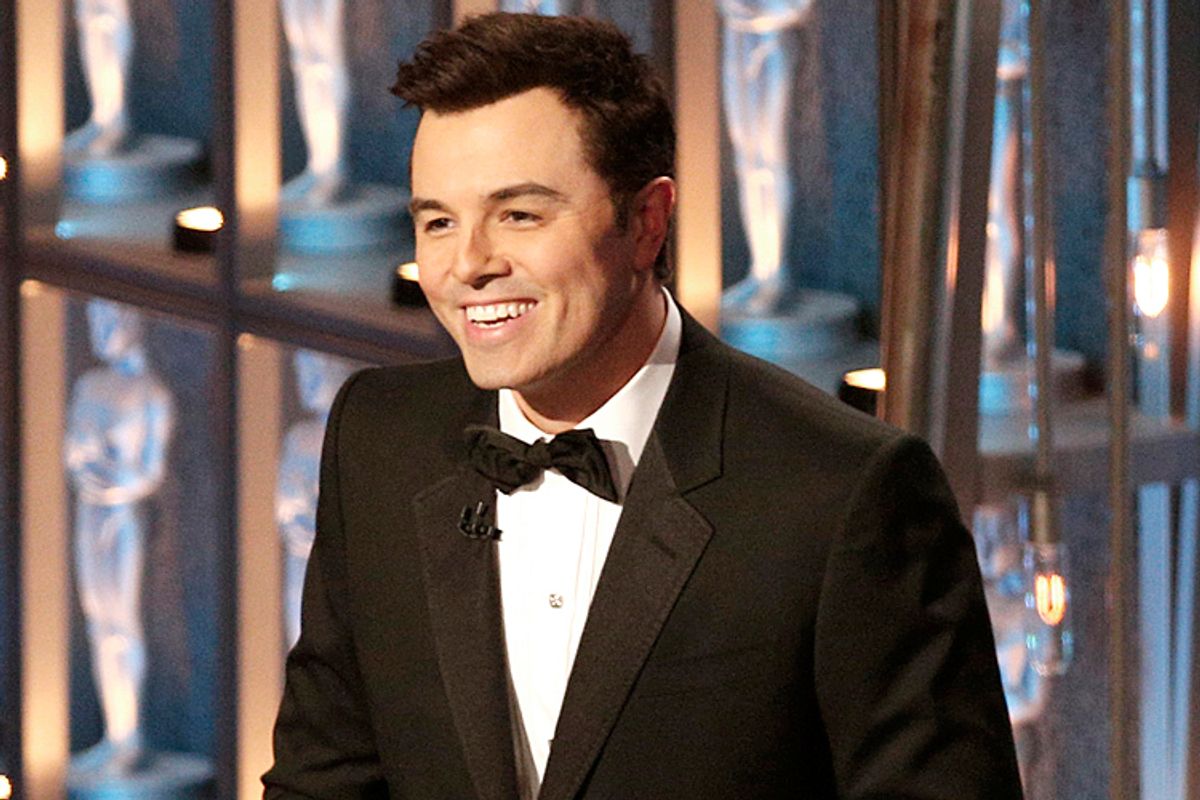 A great host is entertaining and generous, exuding charm and authority. A great comic is funny. Last evening, Seth MacFarlane host of the 85th annual Oscars, was none of those things.

It did not feel like MacFarlane was hosting the entertainment world’s most prestigious event with hundreds of millions of viewers in more than a hundred countries, but an Oscar party for his bros in his parents' basement.

No doubt MacFarlane’s lazy, gratingly unfunny playing-to-the-lowest-common denominator jokes — Jews in Hollywood! Gays in musicals! Women! — are a hit with his fans. But I expected more from the creator of "Family Guy," one of the most successful animated comedy shows on TV. Instead, his lame cracks, the smug grinning and self-congratulatory laughter had the entertainment appeal of watching a kid flicking boogers into the hair of the kid that sits in front of him in English.

The best humor surprises us with its perceptiveness. The best provocative humor — and MacFarlane fancies himself to be quite the provocateur — has the ability to reflect back to us some central truth about ourselves and our culture we’d rather not confront.

MacFarlane began the evening with a joke about the “flu” that swept the female population who planned to attend the Oscars. Get it? Women have been starving themselves, throwing up and suffering from self-inflicted diarrhea, in order to be ready for the Red Carpet! Were MacFarlane mocking himself as a part of that group, or critiquing the culture that insists women weigh less than their IQs, instead of making sport of women who sacrifice their health in a desperate quest to be thin, it might have been amusing.

From there he launched into “We Saw Your Boobs," a wincingly stupid ditty that will go down in the annals of truly atrocious Oscar openings alongside Rob Lowe getting down with Snow White to “Proud Mary.” It’s a simple song; no matter how wasted you are, you can sing along. You don’t have to use the names of the actresses who were in attendance last night at the Oscars -- just drop in the name of whatever actress you want at the end of each verse! “We saw your boobs in the movie, that's what we saw we saw your boobs.”

It was pretty staggering. On a night meant to honor and reward the best performances of the year, MacFarlane let the female Oscar nominees in on a secret: We don’t see the work you’re doing. We’re too busy staring at your tits. Giggle, giggle. Boobies. It wouldn't be funny if he sang, “We saw your dick” because men aren’t expected to strip down in order to sell a movie, and it would be super gay. Want to peek at Bradley Cooper’s grade A beef dart? Dream on. Long to ogle Samuel L. Jackson’s heat-seeking-moisture-missile? As if. Get a load of Hugh Jackman’s wee little Jackman? Not in this lifetime.

Despite MacFarlane’s fondness for rape jokes on "Family Guy," I am sure that it was pure stupidity that led him to name-check Halle Berry in “Monster's Ball,” Hilary Swank in “Boys Don’t Cry” and best actress nominee Jessica Chastain in “Lawless” — as the scenes in which we see their breasts are ones in which they’re being raped or gang-raped.

Shame is played for laughs, though. When actresses such as Charlize Theron’s names were called, they mugged humiliation, shrinking down in their seats in complete mortification. Slap a big Scarlet B on Charlize. B for Boobs. B for Bad Girl. Because what woman would choose to show her breasts unless she was forced to, right? Charlize, that slut, liked it.

When MacFarlane sang about seeing 2012 best supporting actress winner Anne Hathaway’s boobs in "Brokeback Mountain" it felt like the gleeful taunting of the snotty little brother who proudly announces at his sibling’s graduation party, “My sister’s got pubes!” Most creepy, perhaps, was that the focus on the actresses’ boobs wasn’t just on the silver screen, but little screens too. He reminded Scarlett Johansson that “We saw them on our phones,” because hacking someone's cellphone and putting the pictures on the Web is just so funny.

I’ll bet money that there’s a "Tell Your Boobs to Stop Staring at My Eyes" T-shirt on the floor of his closet. His joke that super-hot Jennifer Aniston must have secretly been a stripper at some time in her life suggests it’s balled up next to one with the image of a woman pole dancing that says, "I Support Single Working Mothers, One Dollar Bill at a Time."

But MacFarlane loves women! As he said about Salma Hayek, it doesn’t matter if we can’t understand a word the native Spanish-speaking actress is saying -- we're just staring at her sweater puppies anyway. However, not all dark-haired women are beauties, as he makes clear in a joke ostensibly about Ben Affleck’s beard, but actually a dig at the Kardashian women for having dark facial hair.

To his credit, MacFarlane did move past the subject of female attractiveness. That was when he knocked Rhianna for returning to her ex-abuser boyfriend Chris Brown. Also! Oscar-nominated actress Jessica Chastain’s performance in "Zero Dark Thirty" was “a celebration of every woman's innate ability to never ever let anything go.”

It’s true. Whether we’re hunting down terrorists or still talking about how lousy and unfunny Seth MacFarlane’s turn at hosting the Oscar was, we just can’t let anything go.