Shedding a tear for the International Herald Tribune

The New York Times kills off a 125-year-old brand. Expats of a certain age raise a sad toast 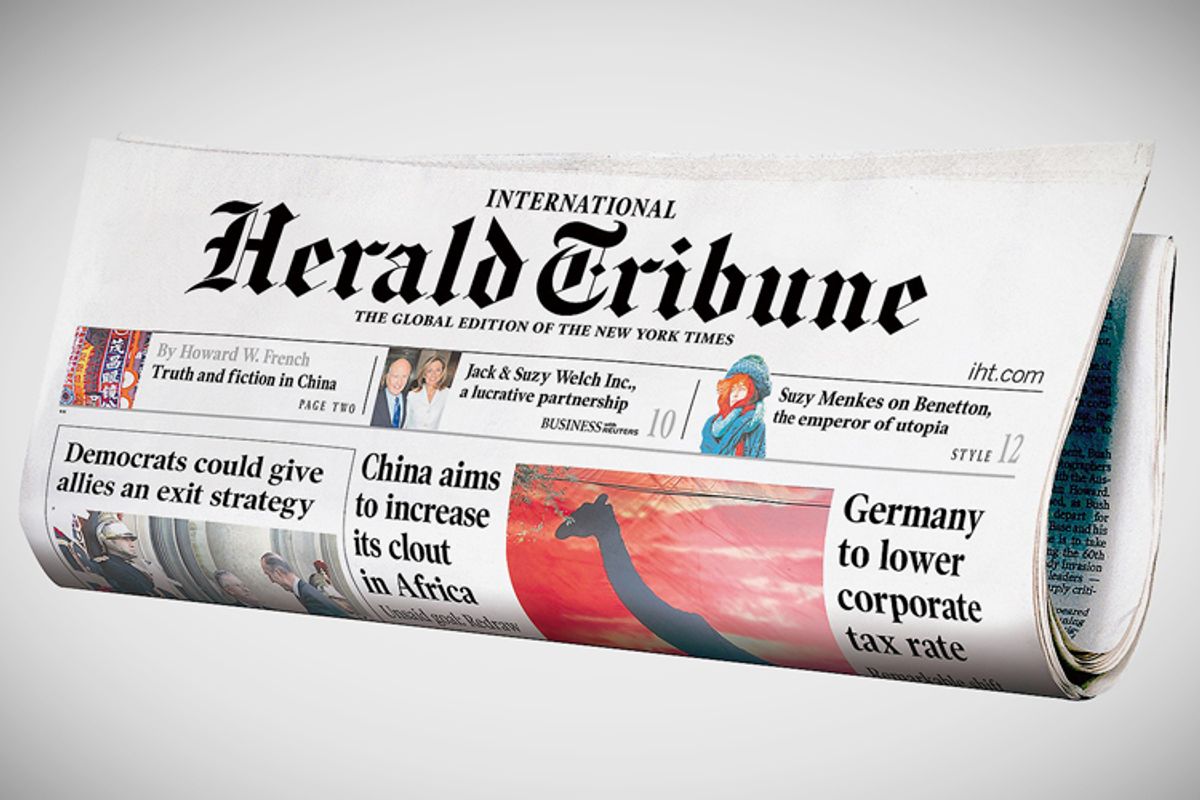 "The announcement is part of the company’s larger plan to focus on its core brand and build its international presence, the Times spokeswoman said," reports the New York Times.

One might wonder how something can simultaneously be called "International" and "New York" but the ugliness of the new title shouldn't distract from the logic of the rebranding. The Times has recently been jettisoning anything and everything that doesn't have the flagship brand name attached (the Boston Globe, About.com, et cetera).  The bean counters are probably right, this time. We're not talking Maker's Mark announcing it is about to start watering down its bourbon. There will be no social media outrage that reverses this slap at history. When all media are available everywhere all the time, your brand is what sets you apart. Double down, New York Times, double down.

Back when our access to the infosphere was more limited, such branding consolidation was not essential. The International Herald Tribune lured us into its net by being one of the very few quality newspapers available in the English language that one could find in Bangkok or Katmandu after emerging from a week trekking or hanging out on some semi-tropical beach. Daniel Drezner is correct to note, in Foreign Policy, that the IHT was overpriced and a little slender on the content side, but even though it was "a small luxury to buy," it was always worth it. Where else would you find your Boston Red Sox box scores?

And how else could you confirm that you'd really gone away? It seems strange to say, but I never felt more thoroughly ensconced in a foreign land than in those moments when I splurged on the Herald Tribune and gobbled up every word printed on its broad pages while sipping my coffee or beer at some cafe. The fact that I couldn't get the New York Times confirmed my expat-ness. Seeing the paper on the newspaper rack at a foreign airport just after deboarding was a welcome sight: Yay! I've really gotten the hell out of Dodge.

Those days are gone. Today, all you need is Internet access and you've got unlimited connection to the entire world of English-language media, no matter where you are. You've got to work a lot harder to feel far away. With the world having shrunk to the size of a smartphone screen, there's no point to being the International Herald Tribune.

As tragedies go, not the greatest in the world. Still, I know that the next time I'm lucky enough to cross a border, and I don't see the Herald Tribune, I'll feel sad. You really can't go home again.