Anne Hathaway has so much trouble winning over the public. Is it a gender double-standard — or is it her face? 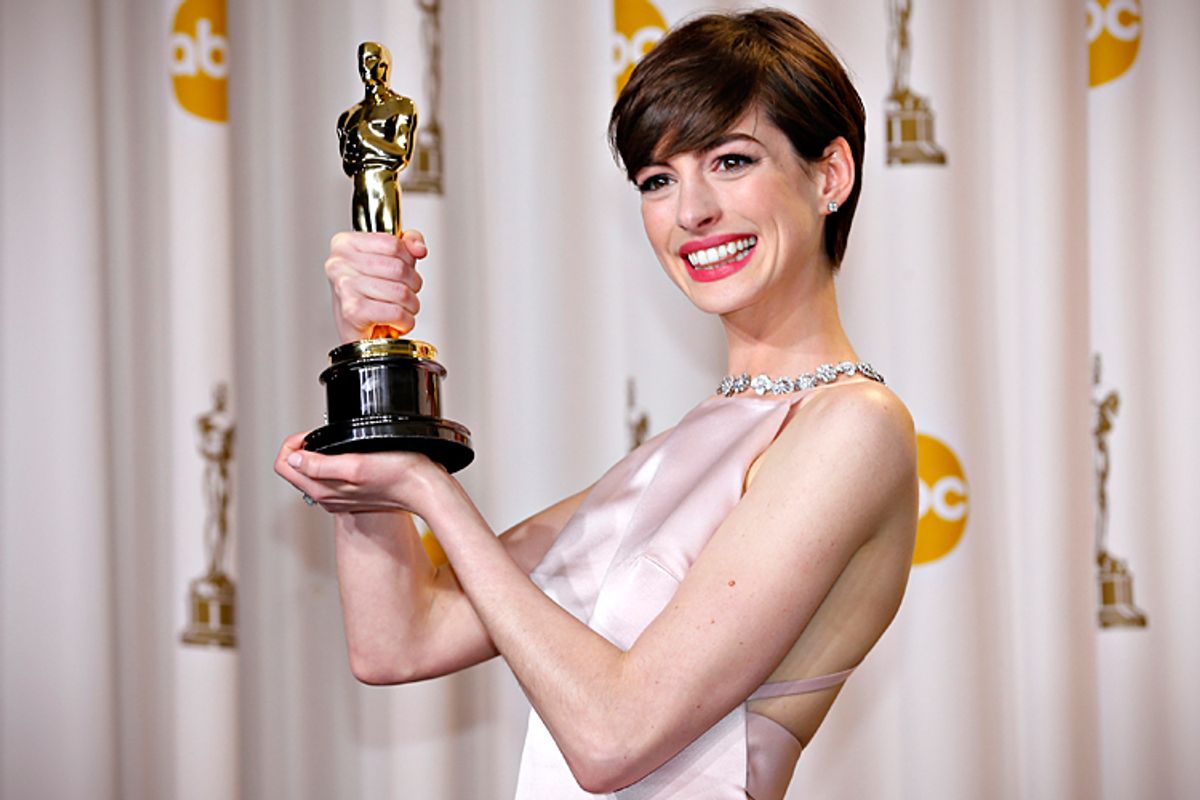 Anne Hathaway has it all: The movie star jumps between lucrative studio pictures like "The Dark Knight Rises" and and passion projects like "Rachel Getting Married." She recently wed boyfriend Adam Shulman in a Valentino gown. And her occasional missteps haven't hurt her one bit -- potential career-enders like "One Day" and "Get Smart" give way to bigger and better movies. Her former boyfriend's imprisonment for running a Ponzi scheme was brushed aside. She flopped as an Oscar host in 2011, but came back to win the best supporting actress trophy for "Les Misérables" at this year's ceremony.

And her public finds it all so infuriating.

Hathaway is the subject of more vituperative, angry scrutiny than perhaps any actress working today. "Shut up. Shut up, Anne Hathaway. I honestly don’t know what it is. Maybe I’m jealous, but I don’t feel jealousy. I watch her in outtakes, and I feel like she’s not a real person," wrote a blogger for women's-interest site Crushable. "I don’t find her perfection charming. I find it annoying."

"She always seems like she's performing, and her favorite act is this overstated humility and graciousness," said a blogger quoted by Brian Moylan in a piece for Hollywood.com.

The Oscars this year, far from an opportunity for Hathaway to overcome her deficit with the audience, just gave the so-called Hathahaters more ammunition -- from her apparently revealing dress to her awed acceptance speech, which Hathaway began by whispering, "It came true."

"Deep down, we loathe celebrities," says David Thomson, film critic and author, most recently, of "The Big Screen: The Story of the Movies."

"We envy them," says Thomson. "We think they don't deserve it. We hate the influence they have over us. And there have to be sacrificial lambs." Hathaway's role is not unlike Lindsay Lohan's, that of punching bag on which we project our resentment of celebrities, generally speaking.

But Hathaway is not an accidental target, Thomson says. "She's just a little too wide-eyed, too good to be true. There is an abiding youthfulness to her," he says. "That princess image has not gone away. She does not yet quite seem a grown woman."

Perhaps there's a double standard at work here. Bradley Cooper comes in for criticism, too, but it has little to do with the degree to which he is or is not a grown man. "People are rougher on young female stars than they are on young male stars," says veteran Hollywood reporter Howard Karren, who served as an editor at Premiere in the 1990s. He notes that the wealth of young actresses able to jump between popcorn and prestige films today is a very new development. When he was at Premiere, the Oscars consistently nominated older, experienced actresses like Susan Sarandon, Jessica Lange and Meryl Streep.

"The closest physical parallel you could make [to Hathaway] is Audrey Hepburn, who is all about grace and poise. In many ways, she's sort of Anne's opposite," says Karren. "And she's tried to break out of that mold to be taken seriously as an actor." To overcome her "Princess Diaries" juvenilia has taken a steely sort of ambition that bleeds through Hathaway's teeth-gritted performances and her exuberant interviews.

Hollinger cites the current über-star: the much-loved Jennifer Lawrence, who now has a best actress Oscar, and two film franchises — the "Hunger Games" and "X-Men." Lawrence tripped on her way to the podium, and laughed it off at the beginning of her speech. Hathaway, though, got through her speech as smoothly as she had in past years, just as she had when she dismissed criticisms of her Oscar-hosting gig or booked a dishy, weepy cover interview in W just after her boyfriend got locked up.

It's hard for Hathaway to win: She's practically taken the "love her/hate her" mantle away from its previous owner, Gwyneth Paltrow. But all actresses face this sort of scrutiny to some degree. Hilary Hallett, a cultural historian and most recently the author of "Go West, Young Women!," says: "Women like the first movie stars were some of the most, if not the most, visible females our society had to talk about. Historically, being visible in public associated women quite literally with the sex trade. As we have not achieved parity, it's not surprising public women play out for many broader anxieties and concerns over changes in sex roles." Thus, the fear of Hathaway's raw ambition; the rather gross frisson of Schadenfreude when cameras caught her in a vulnerable position exiting a car. (The preceding link, though not graphic, may not be safe for work or readers' sensibilities.)

And women online often face a flattening effect -- just as Lawrence's trip on the Dolby Theatre stairs fed into the ongoing perception that she is the "It" girl of the moment, Hathaway's entire mien just builds and builds upon itself. Moylan, who spoke to several Hathahaters, notes that he didn't find her speech particularly annoying, but adds: "We latch on to one specific attribute of people and everything feeds into that theory. It's like the 'Michelle Williams from Destiny's Child is a failure' meme. People take one instance of her falling down in a dance routine. It's probably not really like that. You're looking for ammunition to hate Anne Hathaway -- you're going to find it in everything from what she chooses to wear, whom she dates, when she cuts her hair, everything."

But it may, indeed, be Hathaway's face that fuels her haters, if only subconsciously: "When times are good we prefer actresses with  rounder faces," says psychology professor Terry Pettijohn, who has conducted academic studies on actress preference. "They convey these ideas of fun and youth." Hathaway, on the other hand, has a "mature face" made distinctive by its slender shape and bone structure: "It suggests she would be popular when times are more challenging." As the economy improves, Hathaway -- whose peak of fame, post-boyfriend, pre-Oscar-hosting, came amid the 2008 economic crash —may just be a reminder of bad times.

"She wasn’t afraid to be hated, and audiences respected her for that."

Perhaps Hathaway can embrace her haters, rather than trying to win them over with glossily amiable acceptance speeches and creamily competent vocal performances. She could play a villain, making light of her persona. Or she could just wait for the attentions of the public to move to another target. Karren says: "I have started to hear about Jennifer Lawrence the same things they used to say about Renée Zellweger. Is she that pretty? Is she that great an actress?"

The evil, plotting, faux-perfect version of Hathaway her detractors imagine couldn't have planned it better herself.