We have a long tradition of red-baiting in the Lone Star State, from Martin Dies to Joe McCarthy to our new senator 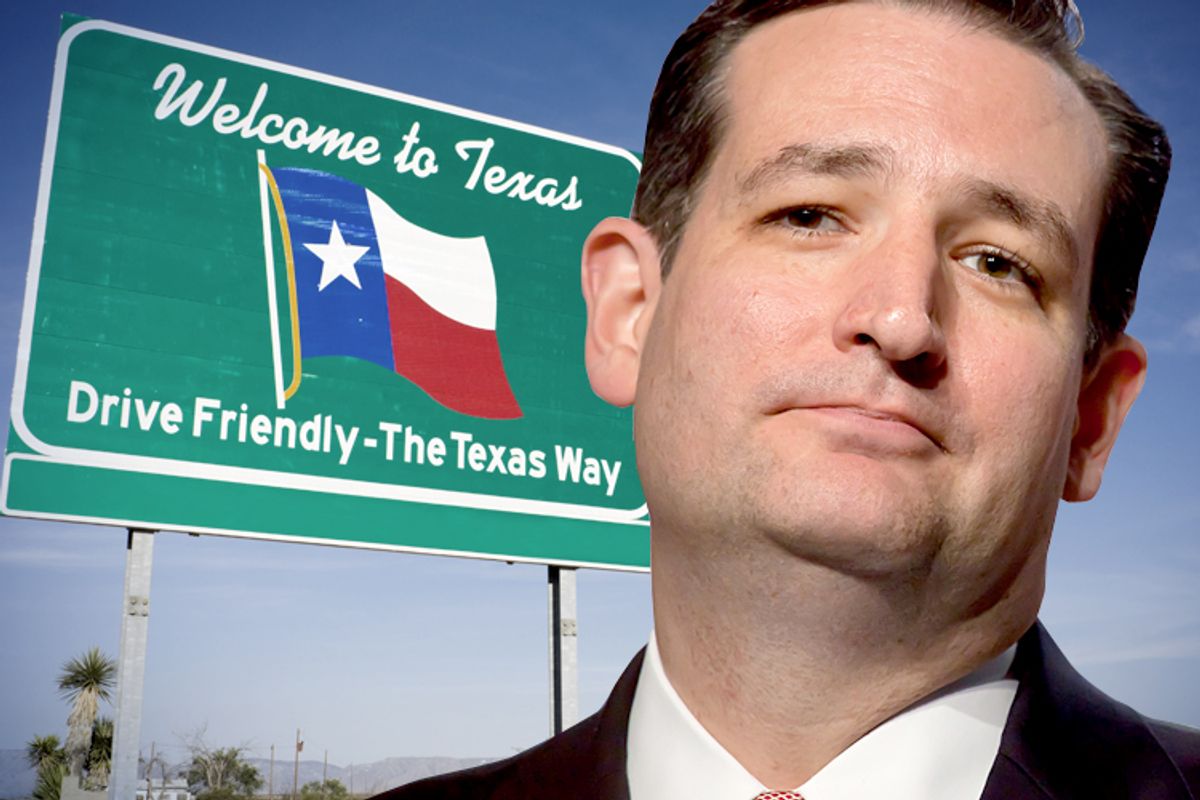 Periodically we patriotic Texans are reminded why the late Molly Ivins said: “I dearly love the state of Texas, but I consider that a harmless perversion on my part, and discuss it only with consenting adults.” In the recent Republican presidential primary campaign, the entire nation, to our embarrassment, learned what we already knew about the Lone Star State’s longest-serving governor. As if that weren’t mortifying enough, the first Latino Senator sent by Texas to the U.S. Senate, where Sam Houston and Lyndon Johnson once served, has turned out to be not only a Tea Party crank but also an old-fashioned red-baiter.

According to Jane Mayer in the New Yorker, Senator Ted Cruz claims that when he studied at Harvard Law in the early 1990s, there were “twelve” communists on the faculty who “believed in the overthrow of the U.S. Government.” Cruz has justly been compared to Wisconsin Senator Joe McCarthy, who exploited the red scare of the early Cold War to go after liberals, until he finally went too far and accused the U.S. army of being a hotbed of pro-Soviet subversion.

But let’s not give Wisconsin all the credit for irresponsible, demagogic red-baiting. Before there was McCarthy, there was Dies (rhymes with “lies”).

Martin Dies (1900-1972) was a conservative Democratic representative from Texas who chaired the House Committee on Un-American Activities (HUAC), originally named “the Dies Committee,” in the late 1930s and early 1940s. (Senator Joseph McCarthy later served as Chairman of the Senate’s Permanent Subcommittee on Investigations, not HUAC). While there were a small number of real communists and Soviet spies in the U.S. government, including high-ranking Roosevelt aides Alger Hiss and Dexter White, Dies, like McCarthy and Cruz, was less interested in catching Soviet agents than in smearing the reputations of liberals and civil rights activists. The same tactic is used today, quite lucratively, by the likes of Dinesh D’Souza and Jonah Goldberg, author of “Liberal Fascism,” and their cynical publishers. (Liberal fascism, liberal communism, whatever).

In 1946, after HUAC decided not to investigate the Ku Klux Klan, one of its members, the Mississippi segregationist John E. Rankin, explained: “After all, the KKK is an old American institution.” Among the targets that HUAC did go after were the Federal Theater Project and Hollywood. In 1938, Dies and his committee listed a number of actors who had expressed support for a communist-owned French newspaper, including a ten-year-old child star—Shirley Temple.

Of Dies the historian Sean P. Cunningham writes in Cowboy Conservatism: Texas and the Rise of the Modern Right: “He pioneered many of the red-baiting techniques later perfected by Joseph McCarthy [and now Ted Cruz—ML], including the practice of making public accusations without evidentiary support…”

(Full disclosure: this particular kerfuffle hits close to home. Not only did I co-teach a course at Harvard Law School once with Roberto Unger, a brilliant, and non-Marxist, thinker who was one of the principals of the Critical Legal Studies movement at the law school, a few years after Ted Cruz graduated, but I also counted among my childhood friends and neighbors in Austin, Texas, grand-children of Martin Dies, with whom I spent many pleasant summer hours in the swimming pool and on the trampoline, without being red-baited once.)

While Martin Dies in Washington was saving capitalism from Shirley Temple, back in Texas claims that the University of Texas was full of Marxists led to the expulsion of its liberal president, Homer Rainey. In 1944, after the Supreme Court ruled that a white-only Texas primary law was unconstitutional, the right wing of the Texas Democratic Party, the Texas Regulars, called in their platform for the “restoration of the supremacy of the white race” and “state rights which have been destroyed by the Communist-controlled New Deal.” When Joe McCarthy succeeded Martin Dies as the leading red-baiter on Capitol Hill, he got so much love from Lone Star conservatives that he was called “the third Senator from Texas.” Now, in Ted Cruz, Texas, which sent the first great red-baiting demagogue to the U.S. House of Representatives, finally has a Tailgunner Joe of its own in the U.S. Senate.

False charges of communism in American politics have always been motivated by more than a desire to smear progressive economic reforms, avant-garde art and campaigns for equal rights for nonwhite Americans. There was (and is) a psychological factor at work. Scholarship has not been kind to the once-fashionable thesis of the liberal historian Richard Hofstadter and others that the radical right that crystallized in the 1950s was a response to working-class “status anxiety.”

What might be called the ethnoregional theory is more compelling. The poet and historian Peter Viereck, who was driven out of the nascent postwar conservative movement early in the 1950s, observed how many of the most ardent anticommunists came from groups outside of America’s Protestant Northeastern/Midwestern mainstream. Northern Catholics (including McCarthy) and white Southerners (including Dies), the two “out” groups that had traditionally made up the Jacksonian alliance against Northern Protestants, were over-represented on the anticommunist right.  Back during the Red Scare, Viereck joked that before long there would be black and Jewish McCarthyites—what better way to prove that you were a “true American” than to denounce as “un-American” the very old-stock, Eastern establishment figures who often looked down on Irish-Americans or Southerners? Viereck, who died a few years ago, would not have been surprised by the appearance of a Latino McCarthyite in the U.S. Senate. He would have seen it as a natural corollary of ethnic assimilation.

The best response to the right’s red-baiting and “liberal fascist” brown-baiting is laughter. Which brings to mind a joke an old stalwart of the anti-communist left once told me (in a secret cell at Harvard Law School….just kidding!)

Back in the 1920s, a group of communists in New York organized a demonstration. Immediately members of the anti-communist left showed up to put on a counter-demonstration. The police showed up and began beating up and arresting everybody on both sides. One protestor exclaimed, “Why are you arresting me? I’m an anticommunist!” The cop replied: “I don’t care what kind of communist you are!”