"Makers": How the feminist revolution was (partly) won

The new PBS documentary about the women's movement doesn't try to tell every story, but it has a lot to say 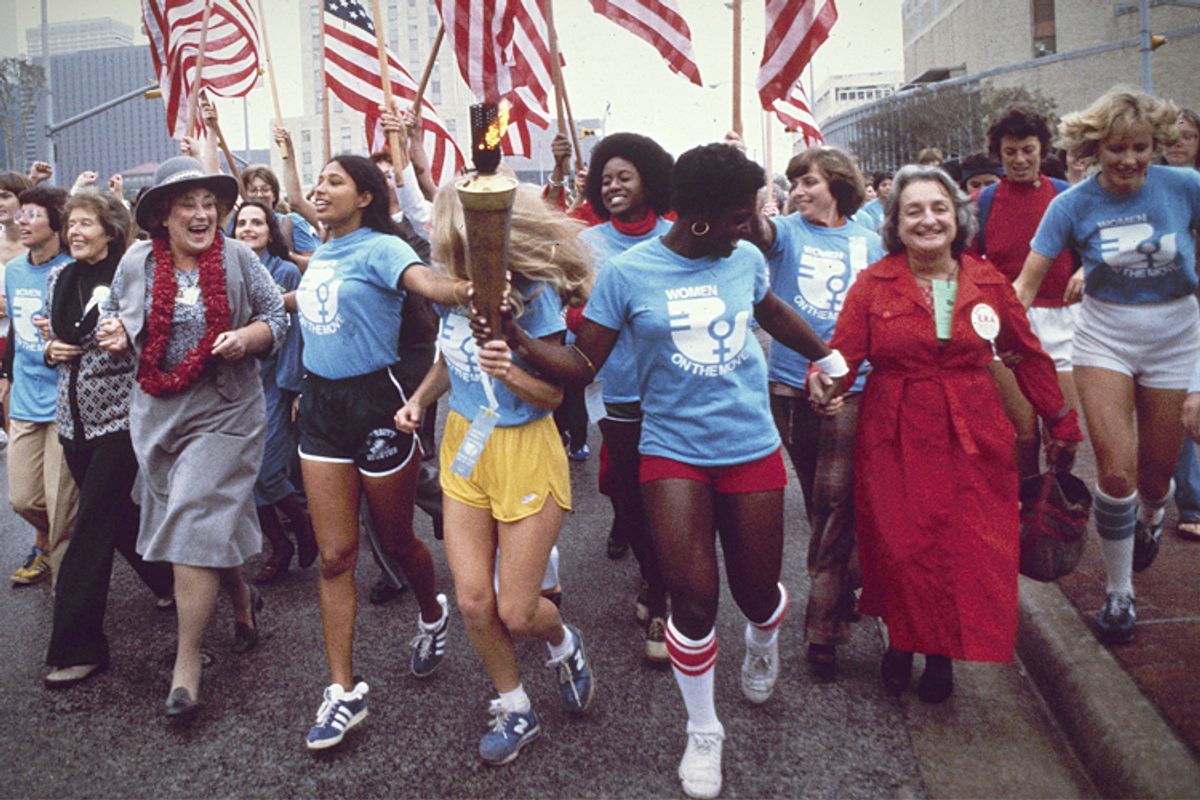 From PBS's "Makers": Some leaders of the women's movement pass a torch that was carried by foot from New York to Houston, Tex., for the November 1977 National Women's Convention. (PBS/AP/Greg Smith)
--

Social movements are the stories of many, often only temporarily aligned, if that. And to tell one story means leaving things out. "Makers," the new documentary about the women's movement airing tonight on PBS, is noticeably aware of that, assiduously covering the bases of nearly every fissure that tore women apart in the last half-century: race, class, gender, sexuality, core political ideology, generational change.

But to tell it all would take more than a lifetime, so here are three hours that are an excellent place to start, especially for those not particularly inclined to start anywhere. (The next place to go is the documentary's website, an enormous archive of interviews, some of them with rare candor, from coal miner Barbara Burns to Hillary Clinton.)

The story begins where most everyone would expect it to, with "The Feminine Mystique," the ennui of white, educated suburban women, Betty Friedan launching it all. (Even as her homophobia and other severe limitations are called out, you have to feel for the deceased Friedan when the camera slowly pans from her, sitting exhaustedly at the edge of the table, to introduce a cigarette-laced, effortlessly charismatic Gloria Steinem at the other end of the table.) But it doesn't stop there: Black women -- particularly Rep. Eleanor Holmes Norton -- give voice to the general inapplicability of the problems of the suburban, single-earner households to the longtime realities of their lives. Lesbians talk of being openly shut out of the movement for fear they would hurt its image. Phyllis Schlafly, a woman identified as a "homemaker/writer," and Fox News commentator Monica Crowley rep for right-wing women and their hostility to the f-word.

To "Makers'" credit, there are famous women here -- famous in the world at large, famous in the retellings of the women's movement -- but there are also women whose names we never heard or forgot, like Kathrine Switzer, the first woman who ran the Boston marathon (and was physically blocked by an official for her audacity), and Dusty Roads, a flight attendant who sued over discrimination. There is attention to cultural barriers and to legal and political ones, to violence and to resistance.

Watching the documentary, it suddenly seems starkly clear that the most profound unresolved conflict of women's progress is not all of the competing struggles of identity, although they obviously matter, but an ambivalence about traditional female roles and activities. That ambivalence lies at the heart of unresolved questions about motherhood, the pleasures or pains of domesticity and fashion, sexuality and "objectification," the persistence of "pink ghetto" jobs held by women -- whether they're being rejected, embraced or reclaimed. (Interestingly, the often-bitter battles over pornography and other forms of paid sex work, for example, are hardly mentioned, unless you count Madonna and the picketing of the Miss America pageant.) And too often, this ambivalence is dispatched with a pat assertion that feminism is about women making choices, so all choices are good. It's beyond the documentary's provenance to solve these disputes, but it provides plenty of fodder to examine them.

Madonna didn't sit for an interview, but there's an archival clip of her saying, "To the feminists, I would like to point out that they're missing a couple of things. Because I may be dressing like the typical bimbo or whatever, but I'm in charge, and isn't that what feminism is all about?" It functions as a book-end to the end of the documentary, which deals (with far less deftness, from this biased, 29-year-old observer's perspective) with whether young women are properly carrying on the mantle of the movement. Ms. co-founder Letty Cottin Pogrebin and her daughter Robin are presented as the archetype of semi-ungrateful younger women finding their mother's feminism to be incomplete. Of the younger Pogrebin's work-life conflict, narrator Meryl Streep intones, "Pogrebin quit her all-consuming television job. Instead, she worked shorter hours from home as a writer, relying more on her husband to support the family." Somehow, this problem, which is given a lot of airtime considering that just critique of the limits of Friedan, is posited as the problem of too much feminism, as opposed to not enough of it informing policies and norms.

Shortly afterward, Michelle Rhee and Marissa Mayer -- controversial figures in their own rights -- come out to essentially shrug off feminism, followed by Monica Crowley saying, "I think modern feminism has sort of come full circle, women are saying, I don't need a movement, I don't need female leaders to tell me what I want to get out of my life. I know what I like. To me that's the great victory of so-called feminism is we are now here to say I can reject the feminist movement or I can go out on TV and have a different opinion from the so-called feminist leaders, and that's OK." It is certainly "OK," in the sense that women have a range of experiences and ideas, and that is both good and not going anywhere. But the documentary itself makes crystal clear that women have never all agreed on what their lives should look like and what would constitute progress. Backlash was happening all around the pioneers; certainly, not every woman embraced feminism even in the 1970s. The only thing that's changed is that some of them are now getting paid more to say so.