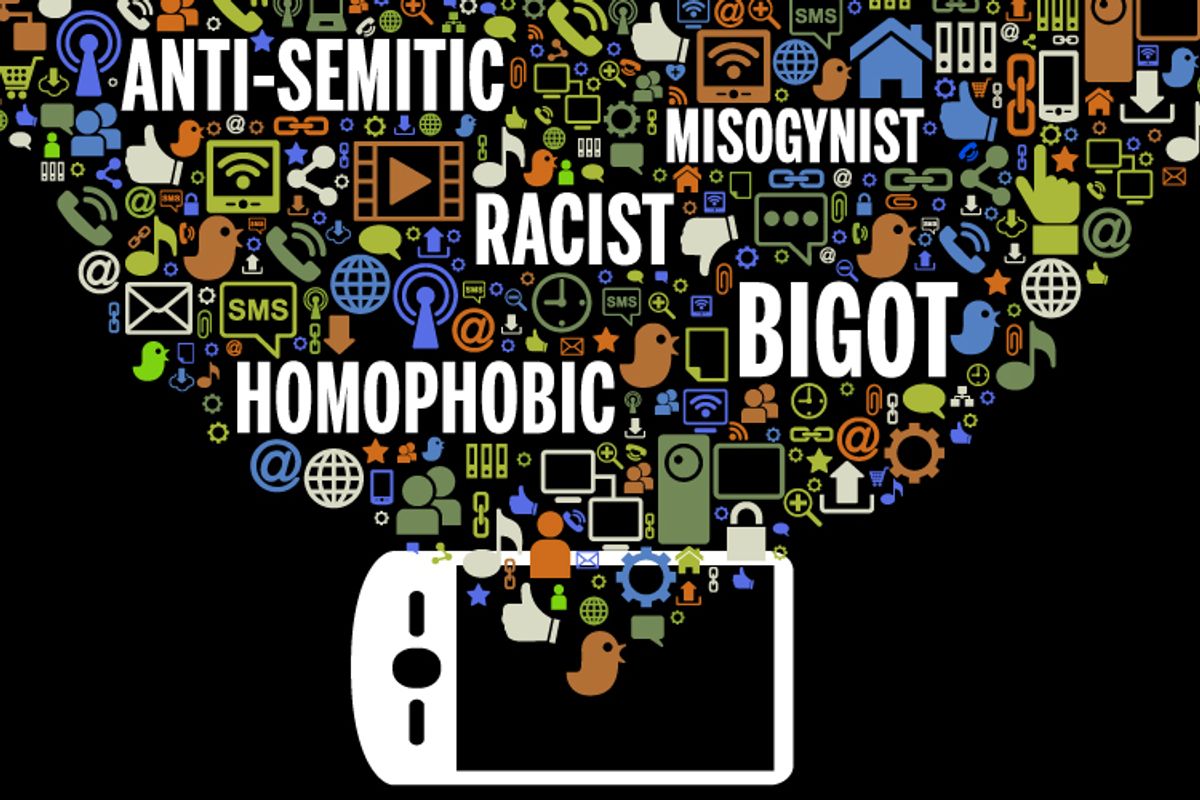 Put aside, for a second, whether Oscars host Seth MacFarlane's comedy routine Sunday night revealed him as a sexist boor or just really, really unfunny. (Or both!) A more interesting question might be whether Twitter has evolved into a button-pushing comic's worst nightmare. Funny or not, you will get called out on Twitter whenever you step over what anybody considers a politically incorrect line. That's what we call a tough crowd. Maybe too tough.

A case in point: With the Twitter masses already on edge after several hours of jokes about eating disorders, domestic abuse and boobs, MacFarlane pissed off an entirely new swath of Oscar-watchers when he said, "Well, we have finally reached the point in the ceremony where either Javier Bardem, Penelope Cruz or Salma Hayek comes onstage and we have no idea what they're saying -- but we don't care because they're so attractive."

My primary objection to this joke was that it was lame. If you're going to play the meta-commentary game you need to do better than that. If I made my own personal list of most offensive MacFarlane Oscar moments, I'm not sure it would crack the top 10. But a cross-section of Hispanics I follow on Twitter immediately labeled the "joke" borderline racist, and an angry mob well-primed to seize upon further outrages speedily retweeted their comments. For the rest of the night, "Latina accent joke" joined the litany of MacFarlane's assaults against his audience.

While the Hayek comments were still reverberating, Salon alumnus Damien Cave, now a reporter based in Mexico for the New York Times, observed in a tweet that "every joke that's not PC causes an uproar. Funny or not, the humor policing is pretty intense tonight."

My hackles rise whenever the words "political correctness" enter the discourse, because it usually happens in a context where legitimate complaints are being downplayed by whomever is getting critiqued for being racist or sexist or anti-Semitic or homophobic or whatever.

But Cave is on to something. The humor police were intense on Twitter Sunday night. In fact, they're intense every night.

There are no free passes on Twitter. Every stumble, every perceived outrage, every moment of weakness or arrogance gets instant crowd-mob treatment. There's always been something exhilarating about this new medium for instant fact-checking and collective calling-to-account, but at the same time, there's never been a better megaphone invented for broadcasting mass sanctimony. Lashing out is just so easy. The first tweet to crack the whip gets retweeted around the world before you can say the words "echo chamber."

At times during Sunday night's broadcast, I got the feeling that all over the world, people were sitting at the edge of their couches, smartphones in hand, just waiting for MacFarlane to feed their rage so they could tweet about it. And as the evening went on, that dynamic fed on and magnified itself. I'm not saying MacFarlane didn't deserve it: quite the opposite, he did everything but get down on his knees and beg for it. But there was also a madness-of-crowds aspect to the whole experience that made me glad I wasn't in a place where I could get physically trampled.

There's a paradox at work here. By democratizing commentary on events that we are all sharing collectively, Twitter gives equal access to every previously marginalized voice. That's not a bad thing, of course. And it's a heck of a lot of fun when we see things we like. But the very nature of Twitter rewards shoot-first-ask-questions-later instant reactions that often fail to take account of, or purposefully ignore, any ameliorating context or nuance. Twitter opens up the floodgates to release our collective, unfiltered id. Again, that's a real tough crowd.

I'm not saying there was a whole lot of context or nuance worth contemplating in MacFarlane's performance. He could have done himself a big favor by simply delivering better jokes. A comic's job description includes crossing the line, and some level of blistering flak in response is just part of the price of doing business. MacFarlane's worst sin wasn't being politically incorrect; it was his insult to our collective intelligence, which grew with compound interest multiplied by each succeeding howler. He did not deserve a free pass. (Although, considering the news that the number of Oscars viewers in the key 18-49 demographic jumped 11 percent over last year, maybe he ended up getting one, anyway.)

But this thing where we watch an event in real time and share a conversation about it via social media is is still new enough that we might not have realized some of its negative consequences. In our pre-Twitter past, we might have simply turned off the TV or switched channels once MacFarlane started singing his dumb song about boobs. But now we stay watching to share our hate! We seem to be more willing to rubberneck at car crashes when we are all doing it together. And it's not just comics who are having a bad day who get the social media pillorying pile-on. We do it during presidential debates and while watching Super Bowl commercials and "Downton Abbey."

Remember what your grandmother told you: "If you don't have anything nice to say, don't say anything at all"? Those rules don't apply to Twitter.