"We Saw Your Boobs" celebrates rape on film

Hey, Seth MacFarlane, did you know many of those "boob" scenes you sang about were depictions of sexual assault? 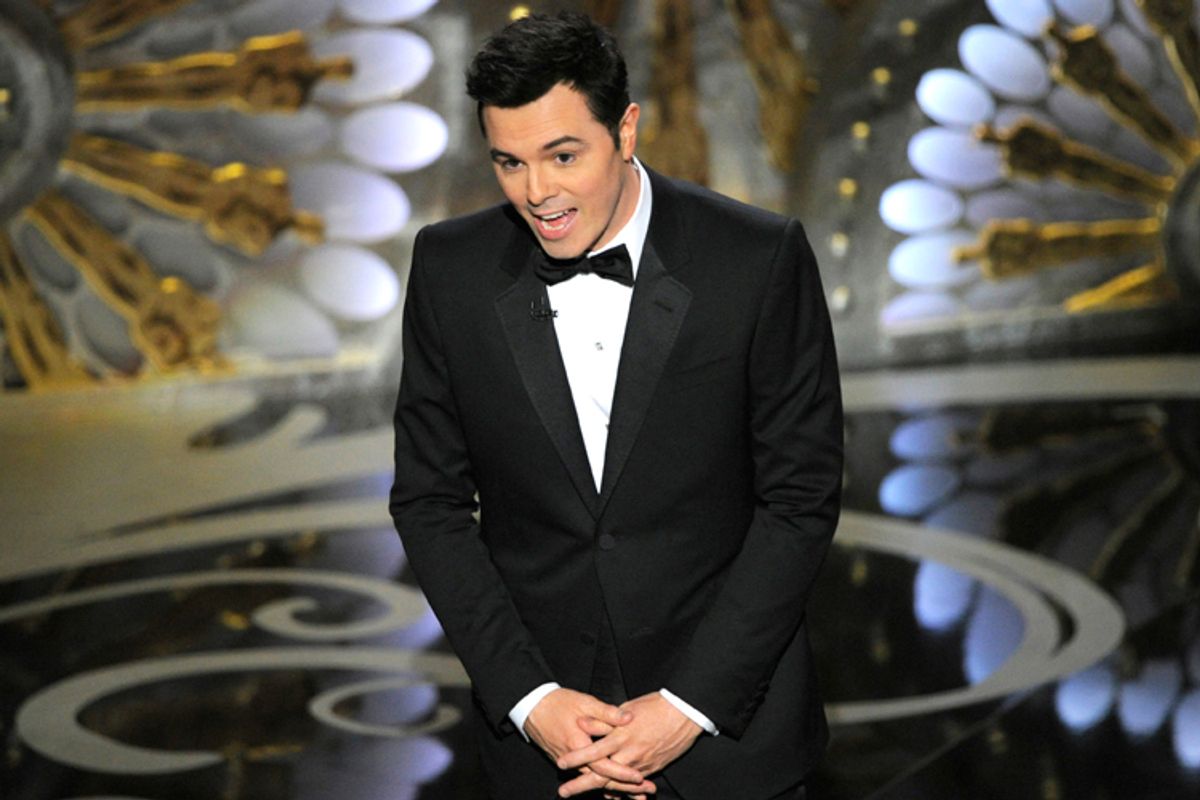 Seth MacFarlane has made millions off being an immature man-child. In fact, it was the success of his particular brand of gross-out offensive humor (served with a smile, of course) that got him the Oscar gig in the first place.

So it came as little surprise, then, when base misogyny and racism dominated MacFarlane's performance on Sunday. And while the musical opener "We Saw Your Boobs" has been called immature (true) and sexist (also true) -- it wasn't just a harmless roundup of spicy movie scenes. Four of the films MacFarlane crooned about featured nudity during or immediately following violent depictions of rape and sexual assault, stripped of their context and played for laughs. Scarlett Johansson found herself on the list because of a real-life violation: Her nude photos were stolen from her phone and leaked online.

Oh, your privacy was invaded and your breasts were splashed across the Internet against your will? That is hilarious!

So let's talk about those "boob" scenes and see how "funny" they play in context.

Strange that one of the earliest films to look at a pervasive culture of violence against women -- from barroom rape to verbal harassment, victim blaming to police harassment -- should be used by MacFarlane to get a snicker from the audience. The film is also loosely based on the real-life gang rape of Cheryl Araujo, who was brutally assaulted by four men in a Massachusetts bar while other patrons passively watched it happen. Apparently they didn't think violence against women was that big of a deal, either.

It's during flashbacks to this bar rape scene that we see Jodie Foster's breasts -- as they are ripped from inside her shirt and violently exposed to her assailants.

Here is what film critic Roger Ebert had to say about the film in his 1988 review:

"Verbal sexual harassment, whether crudely in a saloon back room or subtly in an everyday situation, is a form of violence -- one that leaves no visible marks but can make its victims feel unable to move freely and casually in society. It is a form of imprisonment."

Yet another film based on a tragic true story that made its way into MacFarlane's tune. This time, the target of the sexual assault was transman Brandon Teena, who was later fatally shot and stabbed by his assailants, Tom Nissen and John Lotter.

Do you know when we saw Hilary Swank's "boobs" in "Boys Don't Cry"? During a medical examination after Swank's Teena had been brutally raped on the trunk of a car. It's not sexy. A doctor examine's Teena's breasts -- which are swollen and dark with bruising -- while the character flinches in pain.

Swank's portrayal of Teena brought the experiences -- and the shocking violence committed against -- transmen and women to mainstream audiences for the first time. But who cares about context? Certainly not MacFarlane, and certainly not his producers at the Oscars.

Another critically acclaimed and deeply controversial film that audiences had a giggle at on Sunday. Halle Berry won an Oscar for her performance in "Monster's Ball," depicting a young black widow in a relationship with Billy Bob Thornton, an abusive, racist prison guard who also participated in the execution of her husband. The movie explores -- uncomfortably and clumsily -- race, poverty, codependence and human loneliness.

And yes, we also see Berry's breasts in the film. Tim Wise of Racialicious wrote about the subtext of Berry and Thornton's relationship -- and their explicit sex scenes -- back in 2010:

"Not only was it an aggressive scene in which the line between consent and resistance wasn’t clear at all, but it was, in the eyes of many people, a scene that triggered any number of real emotional memories of a whole history of white male aggression towards black women, and the sexualization of black women."

"Monster" has long been a punch line for "getting ugly to win an Oscar" jokes, but MacFarlane broke with type to use the film -- based on the true story of Aileen Wuornos, a former prostitute who was executed in Florida in 2002 for murdering six men -- to talk about Charlize Theron's breasts.

Other than a sex scene with Wuornos's fictionalized partner (played by Christina Ricci), the only time we see Theron's breasts is in a quick shot in the bathroom, following a brutal rape at the hands of a john, in which she examines her badly beaten body. The "boobs" that MacFarlane sang an ode to are made up to appear badly swollen and red from the multiple times she was kicked in the stomach by her abuser. The nudity isn't there for cheap thrills, it's a snapshot of a terribly beaten body that should evoke horror -- not giggles -- from the viewer.

Johansson isn't even on MacFarlane's list for a film she made. Instead, she made her way into the song because of a real-life invasion of privacy, where her nude photos were stolen from her phone and leaked to the Internet. That is an actual, not fictional violation, and MacFarlane played it for laughs.

In an interview with Vogue magazine, Johansson made clear that there was nothing funny about it:

“It was others. I don’t want to be a victim and say, ‘Oh, well’ and just hide my head in shame. Somebody stole something from me... It’s sick. I don’t want people like that to slide."

It is sick, and people shouldn't let it slide. Much less resurrect it two years later before an audience of millions.

It's not humorless to call MacFarlane and his producers out for what was a crass celebration of violence against women -- both real and fictitious. It's low, it's violent and there is nothing funny about it. Even coming from the creator of "Family Guy" and "Ted."