What about foreign nationals killed by drones? 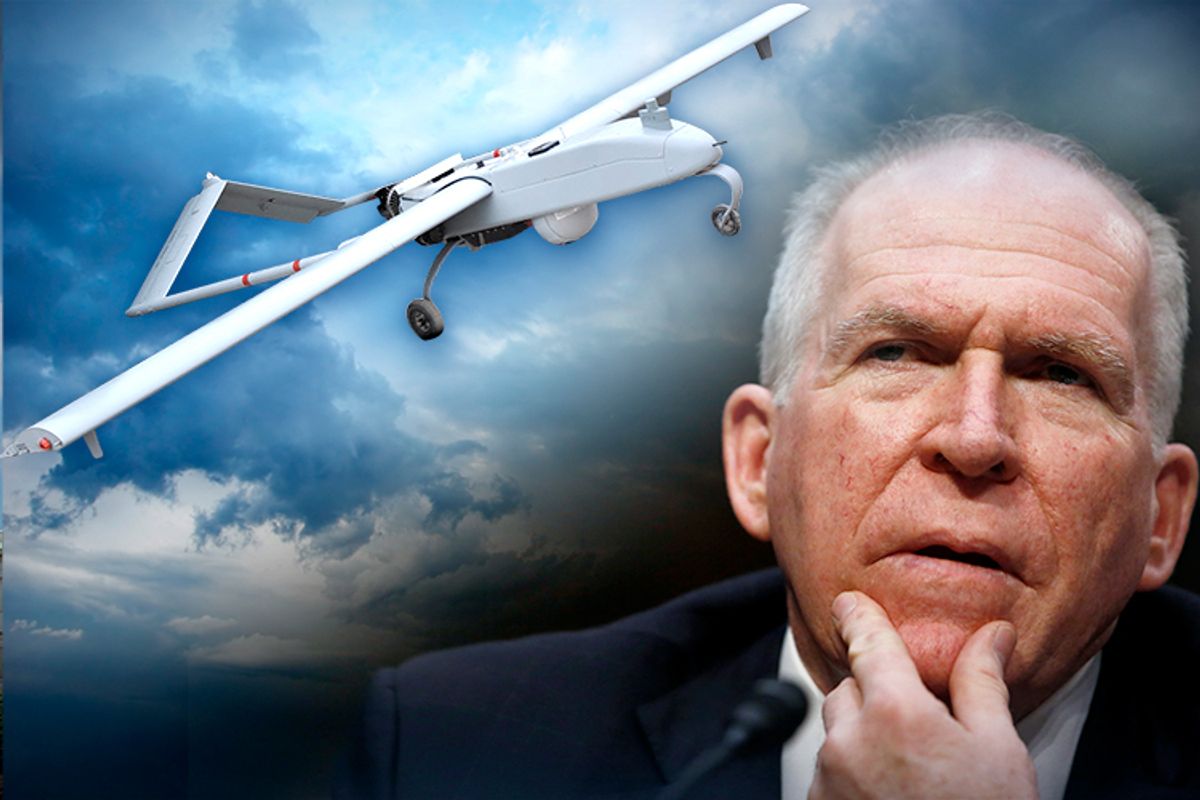 The nomination of John Brennan to be CIA director has prompted intense debate on Capitol Hill and in the media about U.S. drone killings abroad. But the focus has been on the targeting of American citizens – a narrow issue that accounts for a miniscule proportion of the hundreds of drone strikes in Pakistan and Yemen in recent years.

Consider: while four American citizens are known to have been killed by drones in the past decade, the strikes have killed anestimated total of 2,600 to 4,700 people over the same period.

The focus on American citizens overshadows a far more common, and less understood, type of strike: those that do not target American citizens, Al Qaeda leaders, or, in fact, any other specific individual.

In these attacks, known as “signature strikes,” drone operators fire on people whose identities they do not know based on evidence of suspicious behavior or other “signatures.” According to anonymously sourced media reports, such attacks on unidentified targets account for many, or even most, drone strikes.

Despite that, the administration has never publicly spoken about signature strikes. Basic questions remain unanswered.

What is the legal justification for signature strikes? What qualifies as a “signature” that would prompt a deadly strike? Do those being targeted have to pose a threat to the United States? And how many civilians have been killed in such strikes?

The administration has rebuffed repeated requests from Congress to provide answers – even in secret.

“How, for example, does the Administration ensure that the targets are legitimate terrorist targets and not insurgents who have no dispute with the United States?” asked three senior Democrats on the House Judiciary Committee in a letter to Attorney General Holder last May.

The legislators sent a second letter in December. Republicans on the committee joined in sending another letter this month. All have gone unanswered, according to committee staff.

“How do ‘signature strikes’ square with your statement that targeted killing operations are only approved when a targeted individual poses a ‘significant threat to U.S. interests?’” McCain asked, quoting a speech Brennan gave on drone strikes last April.

“How can the Administration be certain it is not killing civilians in areas, like many parts of Yemen and Pakistan, where virtually all men, including civilians, carry weapons?” the letter continued.

A McCain spokesman said the senator had not received a response. The White House declined to comment for this story.

Brennan, for example, said at his confirmation hearing that a lethal strike only occurs when “the intelligence base is so strong and the nature of the threat is so grave and serious, as well as imminent, that we have no recourse.” He was talking only about strikes targeting U.S. citizens, not signature strikes.

Sen. Rand Paul, R-Ky., is now threatening to filibuster Brennan’s nomination until he answers questions on the U.S. citizen issue. And the Justice Department “white paper”leaked to NBC this month outlines the legal rationale for drone strikes, but only in cases when they target U.S. citizens who are also Al Qaeda leaders.

“What about the people who aren’t U.S. citizens and who aren’t on a list?” asks Naureen Shah, a human rights and counterterrorism expert at Columbia Law School. Of the few thousand people killed, Shah notes, “it’s hard to believe all of these people are senior operational leaders of Al Qaeda.”

The hazy history of ‘signature strikes’

The first public reference to a signature strike appears to have been in February 2008, when the New York Times reported a change in drone strike policy, negotiated between the U.S. and Pakistan.

“Instead of having to confirm the identity of a suspected militant leader before attacking, this shift allowed American operators to strike convoys of vehicles that bear the characteristics of Qaeda or Taliban leaders on the run, for instance, so long as the risk of civilian casualties is judged to be low,” the Times reported.

Over the next few years, they became the majority of strikes conducted in Pakistan, according to media reports citing unnamed officials.

The new policy contributed to an increase in strikes in Pakistan – up to a high of about 120 in 2010 – and also to an increase in the number of low-level militants or foot soldiers killed, according to a New America Foundation analysis.

It’s not clear how much evidence is needed to justify a strike. In media reports, U.S. officials have offered scenarios of signature strikes hitting training camps or fighters who might cross the border from Pakistan to Afghanistan. The CIA reportedly usesdrone surveillance and other intelligence to try to ensure those targeted are in fact militants.

Other officials, however, have described the policy more loosely – one calling it a “‘reasonable man’ standard.”

Asked what the standard is for who could be hit, former Ambassador to Pakistan Cameron Munter recently told an interviewer: “The definition is a male between the ages of 20 and 40. My feeling is one man’s combatant is another man’s – well, a chump who went to a meeting.”

It is also next to impossible to say which attacks are signature strikes.

The names of militant leaders killed in strikes are often confirmed by officials in news reports. But that doesn’t necessarily mean the U.S. knew who was there ahead of the strike. One unnamed former military official claimed last year that the CIA “killed most of their ‘list people’ when they didn’t know they were there.”

Conversely, strikes in which little information emerges on who was killed could be failed attempts to hit specific individuals. (According to the New Yorker, it took as many as 16 strikes to kill Pakistani Taliban leader Baitullah Mehsud in 2009.)

The outcomes of strikes are often disputed. In one apparent signature strike two years ago, unnamed U.S. officials told the Associated Press that they had targeted a group that “was heavily armed, some of its members were connected to Al Qaeda, and all ‘acted in a manner consistent with AQ (Al Qaeda)-linked militants.’” The U.S. said about 20 militants were killed. But Pakistani officials said it had been a meeting of tribesmen and villagers provided evidence to the AP that 38 civilians were killed.

According to the Wall Street Journal, the attack prompted a debate in the White House about whether signature strikes and strikes on low-level fighters were worth the diplomatic risks.

The pace of strikes in Pakistan has tapered off since 2010, in large part because of deteriorating diplomatic relations with Pakistan, according to Bill Roggio, who tracks strikes for the Long War Journal.

Last spring the U.S. reportedly expanded signature strikes to Yemen, though administration officials said there were stricter standards than in Pakistan and evidence of a threat to the U.S. or U.S. interests was required. Officials referred to the attacks with a new phrase, “Terror Attack Disruption Strikes.”

That tighter standard is reportedly also part of the Obama administration’s new guidelines for the targeted killing program. (The CIA’s strikes in Pakistan will be exempt from any new rules for at least another year, according to the Washington Post.)

Brennan was asked about signature strikes last April but sidestepped the question. He replied: “You make reference to signature strikes that are frequently reported in the press. I was speaking here specifically about targeted strikes against individuals who are involved.”

He continued that “everything we do, though, that is carried out against Al Qaeda is carried out consistent with the rule of law, the authorization on the use of military force, and domestic law… that’s the whole purpose of whatever action we use, the tool we use, it’s to prevent attack [sic] and to save lives.”

The idea of killing members of an enemy force without knowing their identities isn’t itself controversial.

“In a traditional conflict, there is no requirement that you know every single person’s identity before you strike, so long as there are reasonable grounds for determining that the target is part of the enemy force,” said Jennifer Daskal, a professor at Georgetown Law School and a former attorney in the Justice Department during the first Obama administration.

But legal observers hotly debate the bounds of the drone war, and who qualifies as a member of the enemy force. “In the conflict with a clandestine enemy like Al Qaeda, that determination is much harder,” said Daskal.

While President Obama pledged in his State of the Union address to be more transparent about drone policy, the administration appears to maneuvering to avoid sharing additional information with Congress.

According to the New York Times, the administration may opt to share information on last year’s Benghazi attack with Republican senators to avoid revealing any more legal memos on the drone war to Democratic senators.

Intelligence Committee Chairwoman Sen. Diane Feinstein, D-Calif., has said that her committee reviews videos of strikes.But she also recently said that the committee has long sought all of the legal opinions on drone strikes – and that the administration has withheld most of the opinions.