Slashing food assistance and education for poor kids was OK. But releasing undocumented immigrants is an outrage 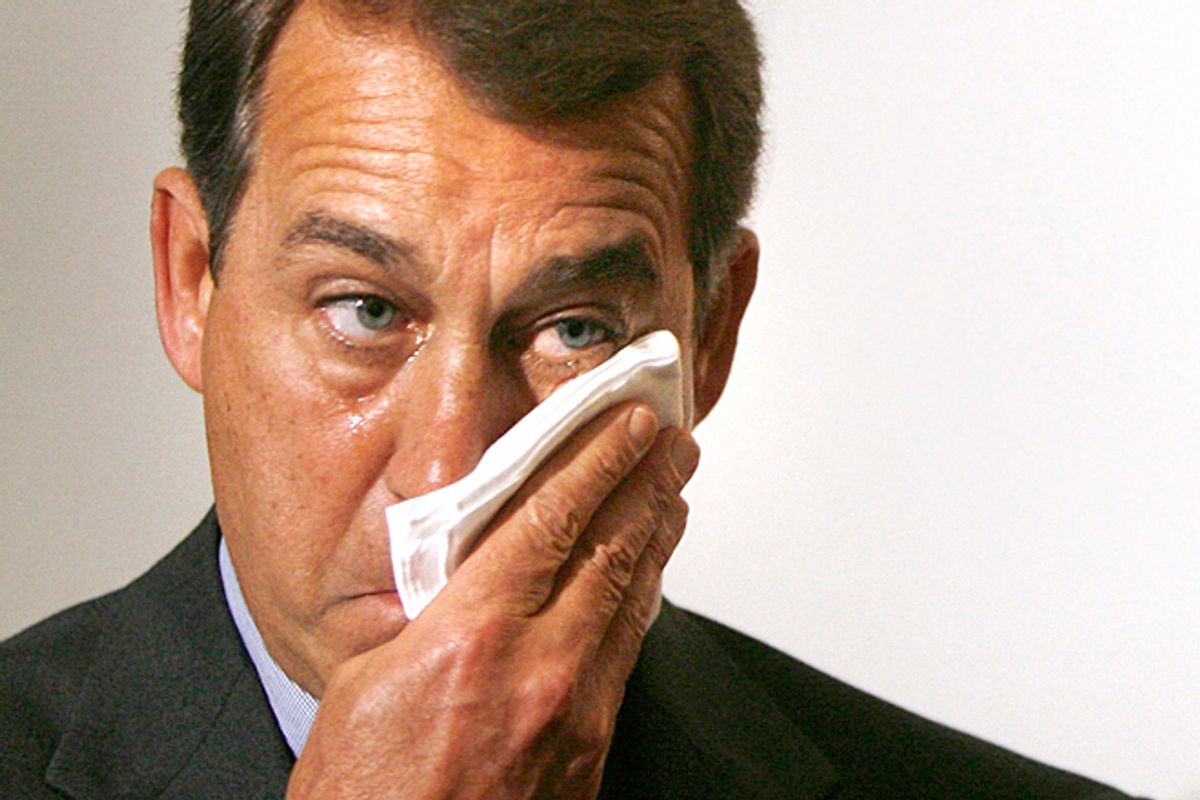 While the Obama administration has been issuing dire warnings about the effects of the impending sequestration deal, Republicans have been more sanguine, apparently happy to reduce the deficit and try to blame the president for the pain the cuts will cause.

But of all the hundreds of government programs on the chopping block, one rose above the others to demand unique outrage from GOP leaders, as the Hill reports:

Republicans are condemning the Obama administration’s decision to release several hundred illegal immigrants from detention facilities because of possible funding cuts from the sequester.

Speaker John Boehner (R-Ohio) blasted the move and said he would be looking for more information. "This is very hard for me to believe that they can’t find cuts elsewhere in their agency," he said in an interview set to air Tuesday night on CBS. "I frankly think this is outrageous. And I’m looking for more facts, but I can’t believe that they can’t find the kind of savings they need out of that department short of letting criminals go free."

Republican Rep. Bob Goodlatte, chairman of the House Judiciary Committee, called the releases “abhorrent” and a threat to public safety. While Alabama Sen. Jeff Sessions said the move is “a convenient excuse to bow to political pressure from the amnesty groups.”

Rush Limbaugh called the Obama administration's move an "impeachable offense" today on his radio show, saying the release is "in direct violation of the oath of office -- defend and protect the Constitution of the United States and the people."

All of those released were being held for nonviolent offenses related to immigration violation -- not hardened criminals who happened to be picked up for immigration issues -- and they will all remain in removal proceedings under “supervised release” (meaning they’ll be given ankle bracelets or have other means of being kept tabs on).

Just to put this in some perspective, Republican lawmakers have hurled nowhere near this kind of rhetoric for the other painful things sequestration will do.

No Republican has called it “abhorrent” that, for example, 4 million meals won’t be delivered to seniors through Meals on Wheels; that few food inspectors will make the food system less safe; that cuts to research programs could set back scientific research for a generation; that tens of thousands of kids will be kicked out of Head Start programs; that tens of thousands of homeless people will be kicked out of shelters; that almost 400,000 seriously mentally ill people will lose services; or that 600,000 women and children will be dropped from WIC.

And if we want to talk about public safety, they could be concerned about the fact that FEMA will have to cut grants to local first responders, there will be 1,000 fewer federal law enforcement officers on the beat, and federal prosecutors will have to pursue 1,000 fewer criminal cases.

We’ve hardly heard a peep from Republican lawmakers about any of that, let alone anything near the righteous indignation they’ve directed at the release of “illegals.” It’d be one thing if Republicans went after all the cuts with equal fervor. But nothing else, not even defense cuts, has risen to this level of concern trolling from GOP lawmakers.

Rarely do you get such a clear look at politicians’ priorities. Cutting money for imprisoning nonviolent immigrants and for weapon programs: abhorrent. Kicking kids off Head Start: meh.

And for a party trying to moderate itself on immigration, this isn’t helping. It suggests that the same kind of knee-jerk anti-"amnesty" mania that has killed immigration reform in the past is alive and kicking. So strong, in fact, that it's more important to lock people up who came to this country "illegally" than to keep cops on the beat or make sure our food doesn't poison us.

UPDATE: A Homeland Security official has resigned over the releases, the AP reports, after the White House today said the move was not their call. This post was also updated to include Limbaugh's comments.