No, Hillary Clinton is not too old to be president

Even some Democrats suggest she can't win the White House at 69. Here's why that's silly -- and maybe sexist 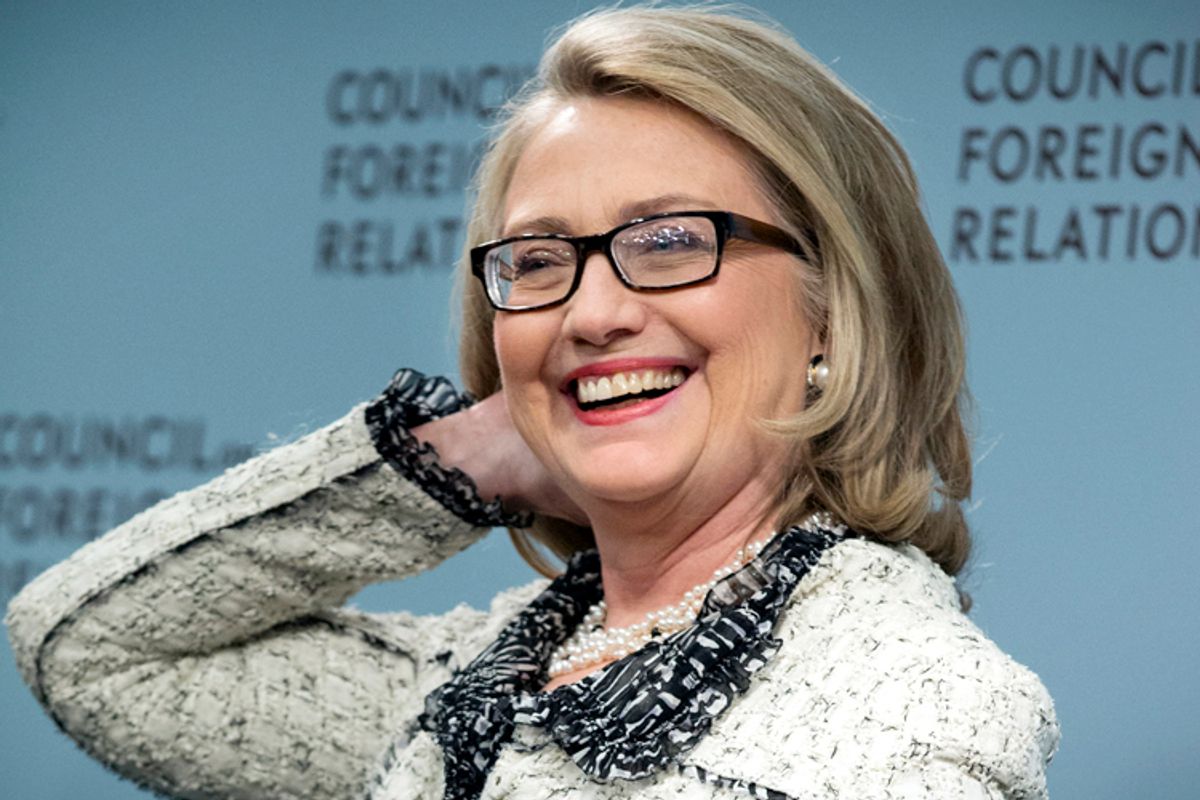 Just in time for the most formidable female candidate in American history to run for president, it’s becoming conventional wisdom: The White House is no place for a senior citizen! Sure, we lived through eight years of Ronald Reagan and four years of his successor George H.W. Bush, who was 68 when he left office. But at 65, Hillary Clinton faces growing questions about whether she’s too old to run in 2016.

In December, Barbara Walters asked Clinton if her age was “a concern.” (She answered no.) Last month, after Clinton’s concussion scare, the Los Angeles Times' Meghan Daum explained that while more rest might result in Clinton looking “less jowly,” she “cannot be presumed to maintain her past and current energy levels into her 70s." Daum advised Clinton supporters to admit the “devastating” truth: "2008 was their one and only chance, and they missed it.”

The latest pundit to suggest Clinton’s age is a serious problem is my friend David Corn of Mother Jones. “I'm not convinced yet that Hillary is going to run because she'll be 69,” he told Chris Matthews and me on “Hardball” Monday. “The last three presidents we've had have been 46, 54 and 47 when they took office. America has turned to younger, more vigorous people.” He predicted that if she ran, Clinton would get a primary challenge from someone “who will wonder if America is ready again to elect somebody that old.”

Lest anyone call him sexist, Corn pointed out that he thinks Vice President Joe Biden is likewise too old to win (though Biden is five years older than Clinton, and would be 82 at the end of a theoretical second term.) “Are you the Grim Reaper?” Matthews needled him. “Is that your new role here?”

But when I looked at the data on presidents’ ages, I had to admit Corn had a point: Although my view is shaped by coming of professional age under Reagan and Bush, in fact, only 10 presidents have been 60 or older when they were elected; the median age is not quite 55. If Clinton ran and won, only Reagan would have been older at the age he took office – and we know how that turned out. Of course, Bob Dole was 73 when he ran in 1996, and in 2008 John McCain was 72 – but voters rejected both of them.

So I’m not crying sexism at Corn or anyone (who isn’t actually sexist) suggesting that Hillary is too old for the race. But I want to make two points about gender here. One is actuarial: Women tend to live longer than men, and stay healthy longer too. The second is sociological: Putting an age limit (even a pundit-prescribed one) on the presidency will have a disparate impact on female candidates, given that most are older than their male counterparts when they start their political careers.

House Minority Leader Nancy Pelosi schooled MSNBC’s Luke Russert on exactly how that works earlier this year, when he asked whether she thought her decision to run again for minority leader “prohibits the party from having a younger leadership.” Pelosi called Russert’s question “offensive,” but allowed that “you don't realize it, I guess,” so she explained:

I came to Congress when my youngest child, Alexandra, was a senior in high school and practically on her way to college. I knew that my male colleagues had come when they were 30. They had a jump on me because they didn't have to, children to stay home. Now, I did what I wanted to do, I was blessed to have that opportunity to sequentially raise my family and then come to Congress … You've got to take off of that 14 years for me because I was home raising a family, getting the best experience of all in diplomacy, interpersonal skills. No, the answer is no.

The women of the Democratic caucus who surrounded Pelosi (she was announcing her intent to run again) cheered. And so did I. Having worked part-time until my daughter was 8, which was my great pleasure and privilege, I sometimes feel like I’m playing catch-up with my male peers who didn’t stay home with their kids part-time.

Now, in a courtroom, policies and practices that have a “disparate, adverse impact” on women or minorities can be found to be discriminatory, and illegal, even if they’re not intended to discriminate. The American people are entitled to discriminate in their choice of presidents, of course, and they’re allowed to choose youth over experience. But to suddenly suggest that the presidency should be reserved for people in their 40s or 50s is deeply unfair to women – as well as men – who are older and can do the job.

In four years as secretary of state, Clinton traveled almost a million miles to 112 countries.  I challenge anyone to find “younger, more vigorous people” who could match that pace. It’s possible that in the next few years, she, and we, will find that she’s not as energetic as she was a few years ago, and she doesn’t have the stamina for the presidency. But let’s wait and see about that. (Besides, at a time when we’re told that because we’re all living longer, we have to raise the eligibility age for Social Security and Medicare, let’s not start limiting what supposedly work-ready seniors can do.)

While I don’t think this is true for Corn, there’s no doubt Clinton’s age will push more people’s buttons than if she were a man. Back in 2007, after Matt Drudge ran an AP photo of a tired-looking Clinton, Rush Limbaugh asked his listeners, "Will this country want to actually watch a woman get older before their eyes on a daily basis?" She had just turned 60. Expect more of the same, much more, from sexists on the right should Clinton decide to run. Democrats don’t have to support Clinton, but they might avoid sharpening the weapons right-wingers will use against her.