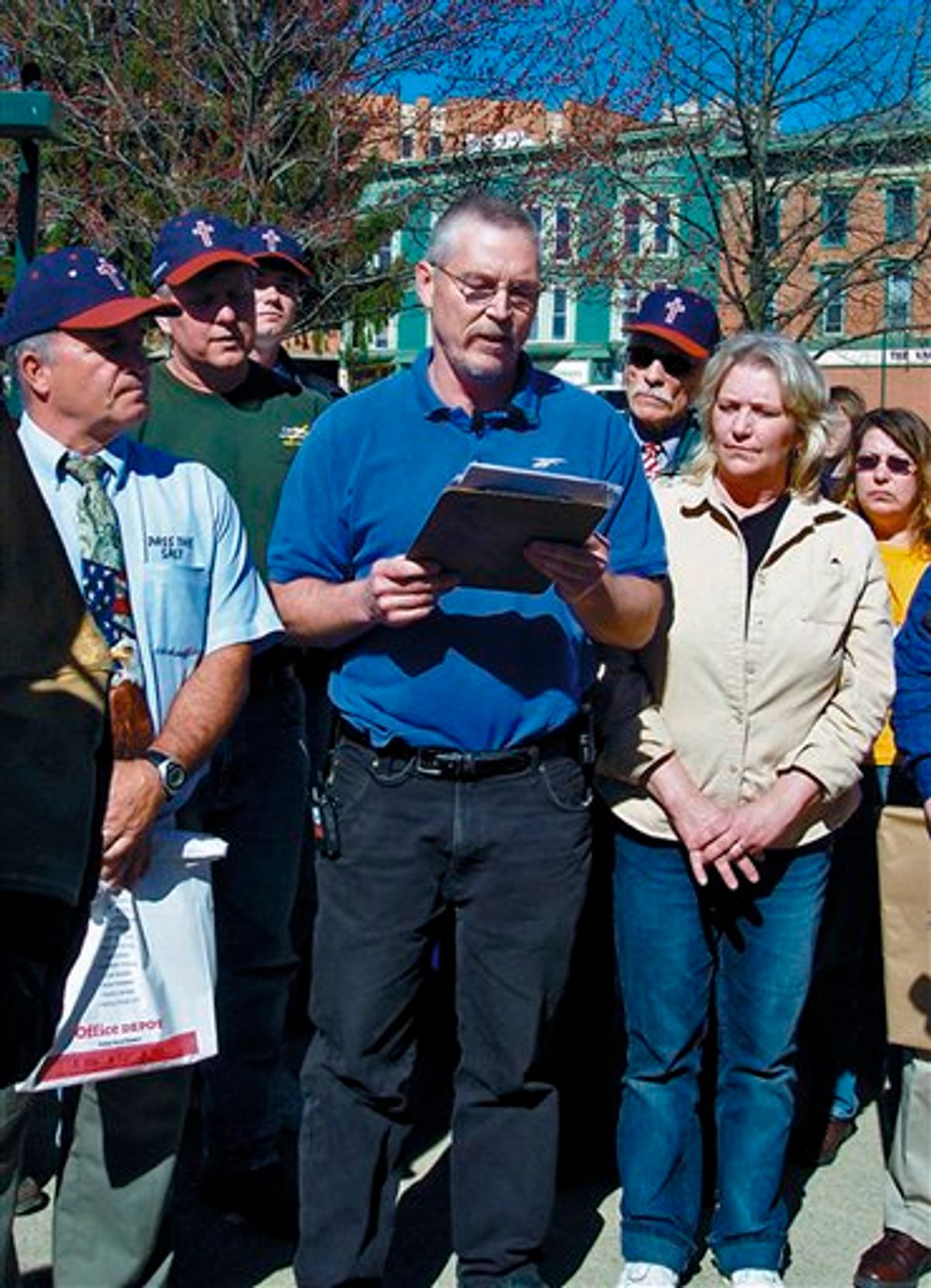 FILE - In this April 16, 2008 file photo, John Freshwater, center, addresses a crowd on Mount Vernon's public square in Mount Vernon, Ohio. The Ohio Supreme Court is ready to hear arguments in the case of Freshwater, a fired public school science teacher who kept a bible on his desk and was accused of preaching religious beliefs in class. (AP Photo/Mount Vernon News, Pam Schehl, File) (AP)
--

COLUMBUS, Ohio (AP) — In a heated hour of arguments, Ohio Supreme Court justices sparred with lawyers Wednesday over the extent to which a now-fired public school science teacher had the right to push his personal religious beliefs in class.

A lawyer for the school board that dismissed John Freshwater in 2011 said he waved a Bible at his students, handed out religious pamphlets and espoused creationism in his evolution lessons.

Freshwater violated the constitutional separation between church and state and was rightfully fired, said David Smith, an attorney for the Mount Vernon School Board.

"You can't teach evolution from a Christian perspective" without violating constitutional protections against government establishment of religion, he said.

Freshwater's attorney, Rita Dunaway, said accounts of Freshwater's class conduct were exaggerated and that the instructor was exercising his academic freedom to explore controversial ideas.

"A Bible on a desk hidden amongst other clutter does not a religious display make," she said.

Freshwater was dismissed in 2011 after investigators reported he preached Christian beliefs in class when discussing topics such as evolution and homosexuality and was insubordinate in failing to remove the Bible from his classroom.

Justices appeared perplexed, at times irritated, about what lawyers believed was the legal issue before them.

Justice Paul Pfeifer was incredulous when Smith argued that Freshwater's evolution class wouldn't have been covered under the school district's controversial-issues policy.

"So there's nothing controversial about evolution. It is a theory, isn't it?" he said.

Freshwater also had been accused of using a science tool to burn students' arms with the image of a cross, but that allegation was resolved and was not a factor in his firing.

Justices wanted to know Wednesday whether that incident played a role in Freshwater's dismissal. Smith speculated that attention surrounding that incident was what prompted the school board's investigation into Freshwater's 21-year career.

In its review, the board concluded Freshwater had used a high-frequency generator, which other teachers have used to demonstrate electrical current, to burn a cross onto a student's arm. The cross lasted a few weeks.

The student's family settled a federal lawsuit against the district in an effort to move on.

In his dismissal case, Freshwater is getting legal backing from the Charlottesville, Va.-based Rutherford Institute, a civil liberties group. Science education and humanist and secular groups have joined the side of the school board.

The school board argues that as far back as 1994, a middle school principal told Freshwater to stop distributing an "Answers in Genesis" pamphlet, which contained information about a creationist organization's seminar, according to a filing by board attorneys asking the court to uphold Freshwater's firing.

Freshwater also used a handout titled "Survival of the Fakest" to teach his students to doubt science, the board's attorneys said.

At the back of the courtroom Wednesday, 17-year-old Esther Sorg and 18 other students from Wilmington Christian Academy about an hour southwest of Columbus were listening in as part of a school field trip.

Sorg said her science classes include evolution, and it seems public school classes could include the creationist perspective without harm.

"My eighth-grade science class was taught from a Christian perspective, but we discussed evolution as well," she said. "I thought that was good because I wanted to know what the current theories were."