If the Scalia wing strikes down the Voting Rights Act, it thinks we're beyond our history of racial bias 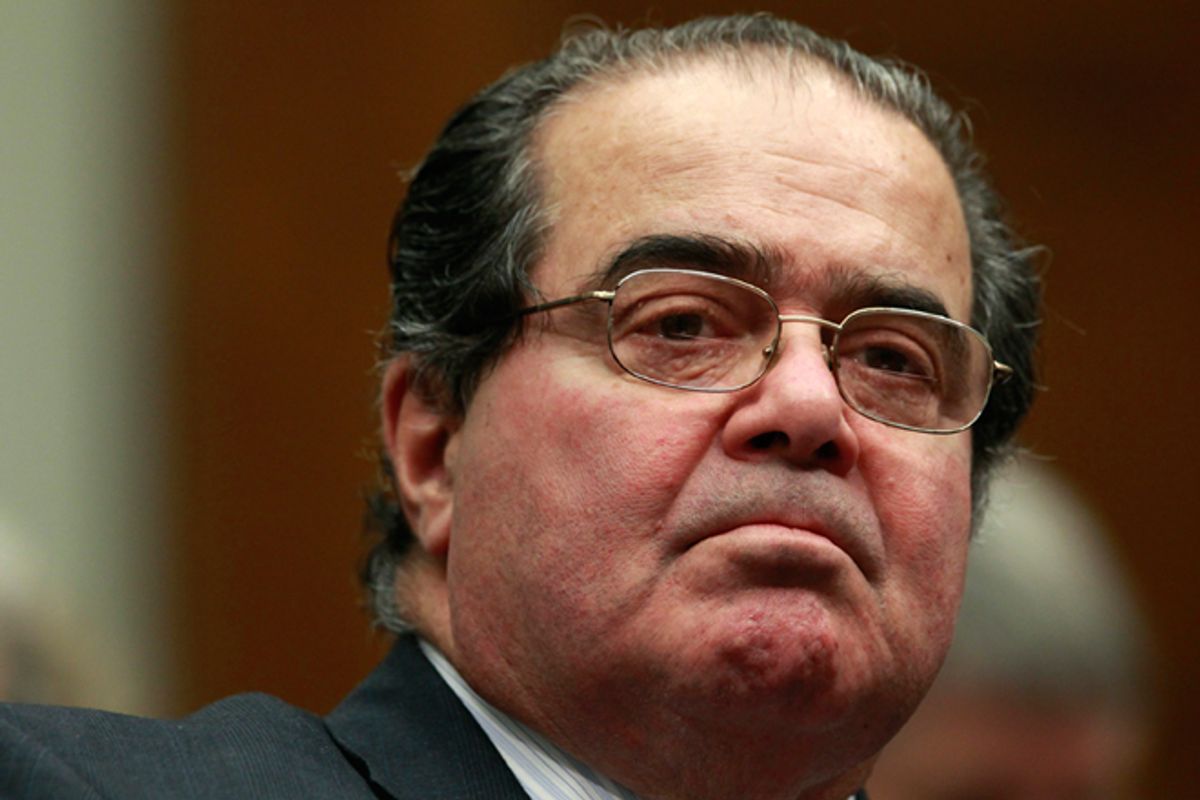 This morning, the Supreme Court heard arguments regarding the constitutionality of the pre-clearance provisions of the Voting Rights Act, which require certain states with a history of disenfranchising African-American voters to have any changes in their law regulating voting to be approved by the Department of Justice first.

Most observers expect the court to declare those provisions unconstitutional, even though they were extended by the Senate by a unanimous vote less than seven years ago, while facing only token opposition in the House. All in all, 488 of 521 members of Congress voted to renew the pre-clearance provisions.

The enthusiasm with which the court’s righter wing appears to be greeting constitutional attacks on provisions adopted and renewed by overwhelming legislative majorities could make a cynic suspect that “conservative” criticisms of judicial review can often be reduced to the axiom, “the democratic process should be respected, unless it produces a result we really don’t like.”  (Reportedly, during this morning’s oral argument, the increasingly egregious Justice Scalia likened congressional renewal of the Voting Rights Act to a “perpetuation of racial entitlement.”)

The policy arguments for getting rid of pre-clearance boil down to the claim that the sort of disenfranchisement motivated by racial bias that pre-clearance was designed to combat has largely if not completely disappeared. This may or may not be true, but it’s hard to see why unelected judges should decide whether or not it is rather than elected legislators.

But there’s a deeper problem with claims that America has “moved past” our history of racial discrimination to the point where a vigorously enforced Voting Rights Act is no longer necessary.

The Voting Rights Act, and its equally important cousin the Civil Rights Act, were both adopted in the mid-1960s, when, incredible as it may seem to today’s youth, Jim Crow still flourished throughout the American South. (My mother, who grew up in Mexico, attended the University of Texas in the 1950s, and was deeply shocked to encounter “colored” and “whites only” public facilities.)

These landmark pieces of legislation were passed, and have been renewed many times since, because the injustice they confronted was so unambiguous. Little more than a generation ago, African-Americans in much of the United States were quite literally second-class citizens, and the resistance to changing that came from very powerful people who were openly and indeed proudly racist.

Almost overnight, in historical terms, the sort of open racism that was the law of the land, if that land happened to be located in the old Confederacy, became illegal, and, to a lesser extent, socially unacceptable. But it would be naive in the extreme to assume that passing laws by itself changes the culture those laws were intended to combat.

As last November’s election illustrated so powerfully, the American electoral system is still as a practical matter designed to keep as many “undesirable” voters from voting as possible. The problem now is that we no longer confront a system in which powerful people openly advocate disenfranchising black voters, or poor voters, or voters with Spanish last names.

Instead we have a system in which the rules that govern voting just happen to have that effect. Why is Election Day in America a work day, unlike in almost every other Western nation? Why are the mechanics of voting a purely local matter, guaranteeing that people who live in poor neighborhoods are far more likely not to have access to accurate and efficient voting technology? Why must, in the age of the Internet, people stand for eight or more hours in line to do something as simple as cast a ballot?

The answer has little, if anything, to do with the sort of conscious political conspiracy against African-Americans that the Civil Rights and Voting Rights Acts were originally addressing. Such things are reflections of the fact that, contrary to the claims of those who say America has “moved past” our history of maintaining racial and economic caste systems, that past is still very much with us.