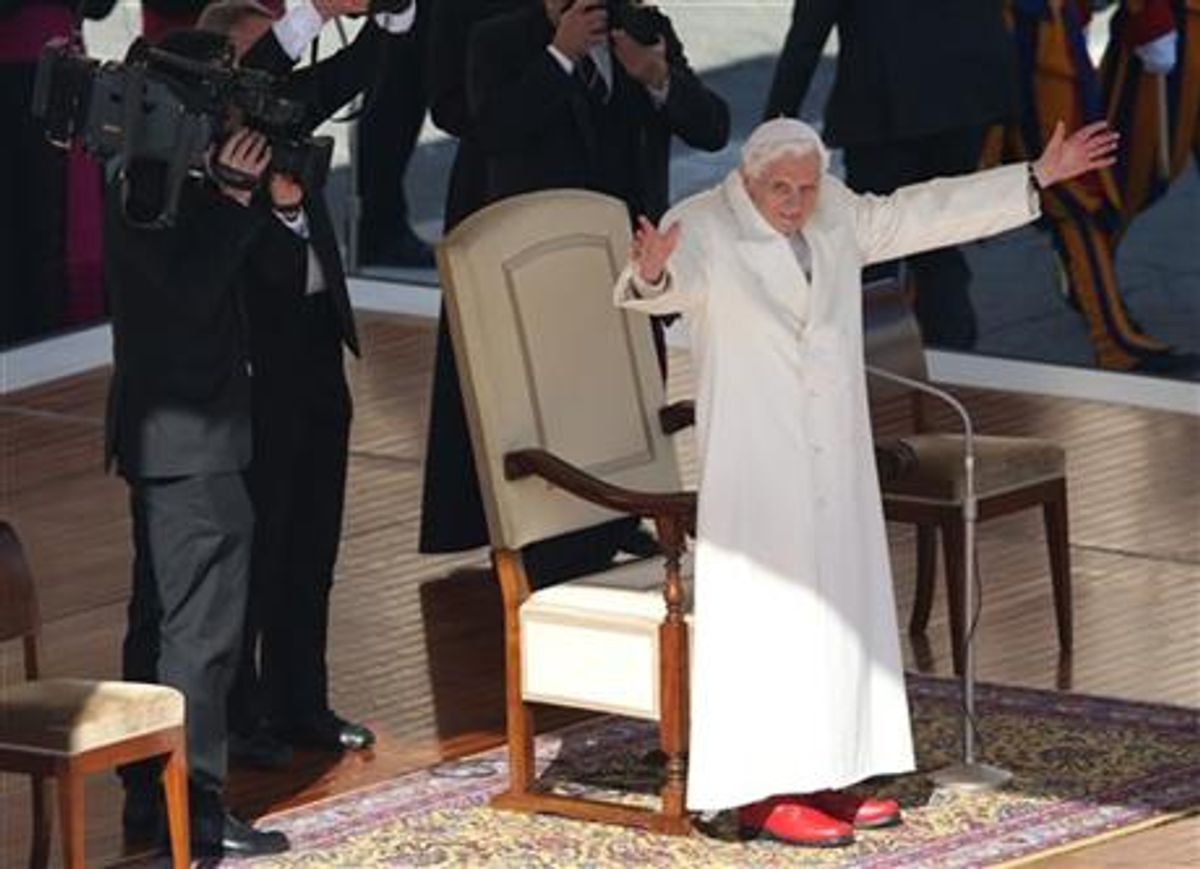 VATICAN CITY (AP) — Pope Benedict XVI bid an emotional farewell Wednesday on the eve of his retirement, recalling moments of "joy and light" during his papacy, but also times of difficulty when "it seemed like the Lord was sleeping."

Some 150,000 people, many waving banners proclaiming "Grazie!" flooded St. Peter's Square, eager to bear witness to the final hours of a papacy that will go down in history as the first in 600 years to end in resignation rather than death.

Benedict basked in the emotional send-off, taking a long victory lap around the square in an open-sided car, and stopping to kiss and bless half a dozen babies. Seventy cardinals, some tearful, sat in solemn attendance — and gave him a standing ovation at the end of his speech.

Benedict then made a quick exit, forgoing the meet-and-greet session that typically follows his weekly general audience, as if to not prolong the goodbye.

Given the weight of the moment, Benedict also replaced his usual Wednesday catechism lesson with a heartfelt final address, explaining once again why he was retiring and assuring his flock of 1.2 billion that he was not abandoning them.

"To love the church means also to have the courage to take difficult, painful decisions, always keeping the good of the church in mind, not oneself," Benedict said to thundering applause.

He noted that a pontiff has no privacy — neither as pope, nor in his future role as emeritus pope: "He belongs always and forever to everyone, to the whole church."

During his eight years as pope, Benedict said he had had "moments of joy and light, but also moments that haven't been easy. ... Moments of turbulent seas and rough winds, as has occurred in the history of the church, when it seemed like the Lord was sleeping."

But he said he never felt alone, that God always guided him, and he thanked his cardinals and colleagues for their support and for "understanding and respecting this important decision."

The pope's tenure has been beset by the clerical sex abuse scandal, discord over everything from priestly celibacy to women's ordination, and most recently the betrayal by his own butler, who stole his private papers and leaked them to a journalist.

Under a bright sun and blue skies, the square was overflowing with pilgrims and curiosity-seekers. Those who couldn't get in watched on giant TV screens set up along the main boulevard leading to the square. About 50,000 tickets were requested, and in the end, the Vatican estimated that 150,000 people flocked to the farewell.

"It's difficult — the emotion is so big," said Jan Marie, a 53-year-old Roman in his first years as a seminarian. "We came to support the pope's decision."

With chants of "Benedetto!" the mood was far more buoyant than during the pope's final Sunday blessing. It recalled the jubilant turnouts that often accompanied him at World Youth Days and events involving his predecessor, Pope John Paul II.

Benedict has said he decided to retire after realizing that, at 85, he simply didn't have the "strength of mind or body" to carry on.

"I have taken this step with the full understanding of the seriousness and also the novelty of the decision, but with a profound serenity in my soul," Benedict told the crowd.

He will meet Thursday morning with his cardinals for a final time, then fly by helicopter to the papal residence at Castel Gandolfo south of Rome.

There, at 8 p.m., the doors of the palazzo will close and the Swiss Guards in attendance will go off duty, their service protecting the head of the Catholic Church over — for now.

Many of the cardinals who will choose Benedict's successor were in St. Peter's Square for his final audience. Among them was retired Los Angeles Cardinal Roger Mahony, the object of a grass-roots campaign in the U.S. to persuade him to recuse himself for having covered up for sexually abusive priests. Mahony has said he will be among the 115 cardinals voting for the next pope.

"God bless you," Mahony said when asked by television crews about the U.S. campaign.

Also in attendance were cardinals over 80, who can't participate in the conclave but will take part in meetings next week to discuss the problems facing the church and the qualities needed in a new pope.

"I am joining the entire church in praying that the cardinal electors will have the help of the Holy Spirit," 82-year-old Spanish Cardinal Julian Herranz said.

Herranz has been authorized by the pope to brief voting-age cardinals on his investigation into the leaks of papal documents that exposed corruption in the Vatican administration.

Vatican officials say cardinals will begin meeting Monday to decide when to set the date for the conclave.

Still, the rank-and-file faithful weren't so concerned with the future: They wanted to savor the final moments of a pope they have known for years.

"I came to thank him for the testimony that he has given the church," said Maria Cristina Chiarini, a 52-year-old homemaker who traveled by train from Lugo in central Italy with about 60 members of her parish. "There's nostalgia, human nostalgia, but also comfort. Because as Christians we have hope. The Lord won't leave us without a guide."